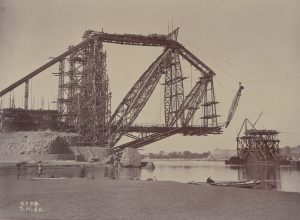 The Royal Commonwealth Society Library’s recent purchase at auction of a splendid presentation album of photographs (Y30244A), celebrating the opening of the Lansdowne Bridge, Sukkur, inspired considerable excitement among those interested in the history of British India. Now we are thrilled to announce that the album has been digitised and made freely available on Cambridge Digital Library thanks to the generosity of the Smuts Memorial Fund. 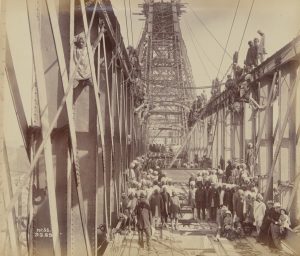 The bridging of the Indus River at Sukkur by the North Western Railway was of great significance because it linked Lahore with the major port of Karachi on the Arabian Sea.  Finished in 1889, the bridge was an engineering marvel, becoming the longest rigid girder bridge span in the world.  Every stage of this momentous project is recorded in the album’s 65 photographs, beginning with the spanning of the Sukkur channel in 1885 (Y30244A/2-6), and concluding with a two-part panorama of the completed bridge (Y30244A/64-65).