Celebrating 20 Years of the Aoi Pavilion

Posted on 29 June 2018 by Special Collections

Celebrating 20 Years of the Aoi Pavilion: Home of the East Asian Collections at the University of Cambridge 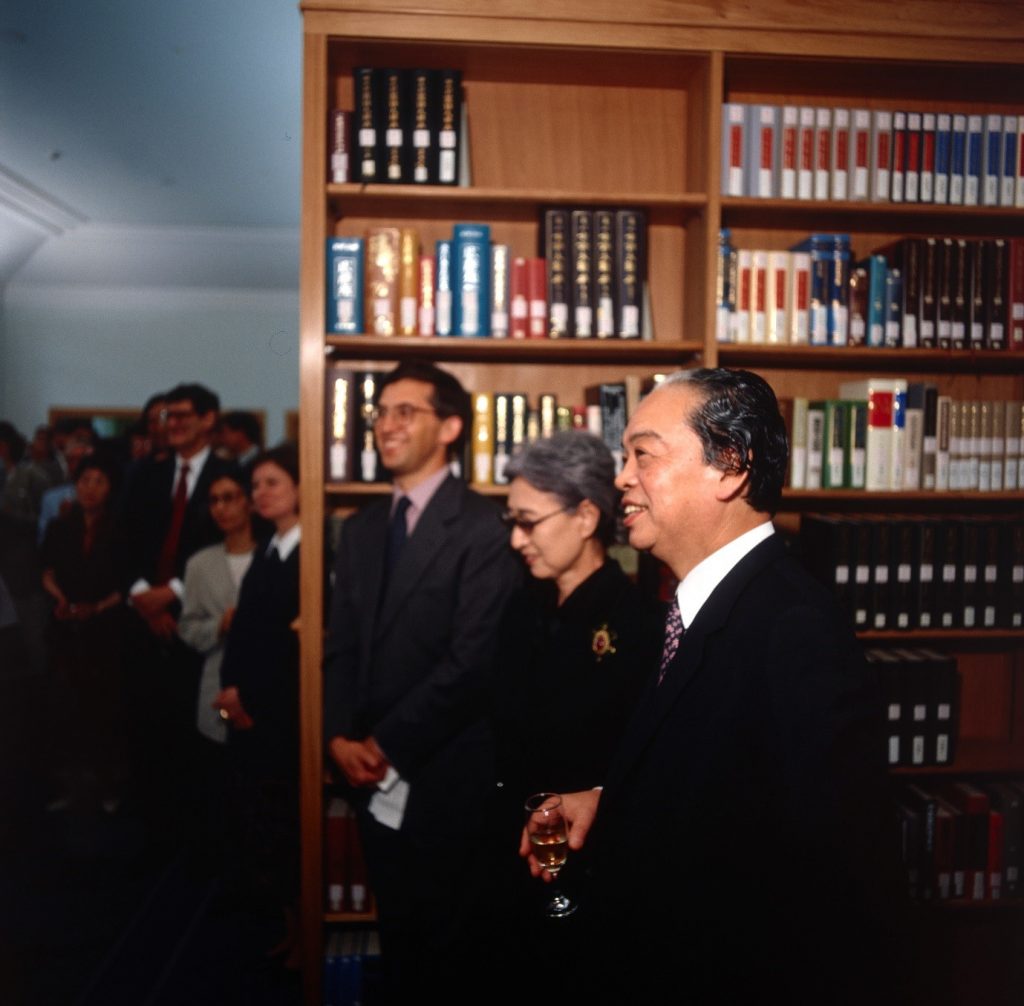 On 8 June, 1998, Lord Broers, then Vice-Chancellor of the University of Cambridge, officially opened the Aoi Pavilion together with the donor, Mr Tadao Aoi, then President of the Marui Company, Ltd., and his wife, Mrs Noriko Aoi, a scholar of Japanese literature.

For the past 20 years, the Aoi Pavilion has been a home for the Japanese and Chinese collections at the University of Cambridge. It has supported researchers at all levels, from undergraduates to lecturers and visiting scholars.

The first floor East Asian Reading Room and the book stacks on the basement and ground floor levels of the Aoi Pavilion now hold around 250,000 items in Japanese, Chinese, and Korean. Readers are free to browse the shelves on the ground floor and about half of the basement. 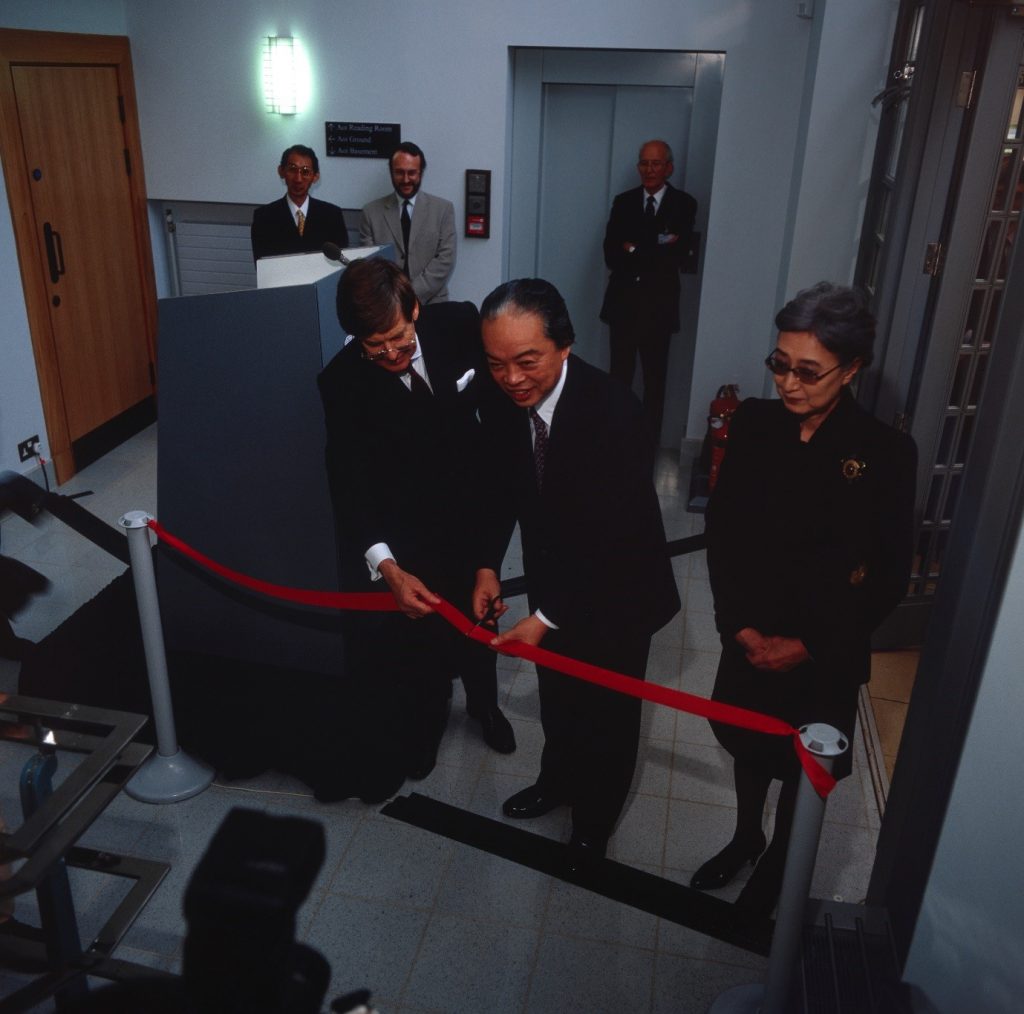 To mark the occasion, we have two Japan-related exhibits and four new e-resources for Japanese studies.

On display in the entrance hall is ‘Bold Designs and Detailed Sketches: Books by Hokusai and his Contemporaries’ (27 June to 11 July 2018, open to the public). The books displayed there are 19th century illustrated woodblock-printed books and prints by ukiyo-e artists.

Members of the University of Cambridge and readers inside the University Library can also now benefit from the following new e-resources: ‘Maisaku 毎索’, ‘Zassaku Plus 雑誌記事索引集成データベース’, ‘Kadokawa kogo daijiten 角川古語大辞典’, and ‘Fūzoku gahō 風俗画報’. A full list of e-resources in Japanese studies is also available.

Among the books in the Aoi Pavilion is one of the finest collections of Japanese rare books and manuscripts in Europe. With more than 2,500 titles and thousands more volumes, it may be the largest such collection of any academic institution in Europe and second only to the British Library. Cambridge’s Japanese collections began in earnest with the 1911 acquisition of books and manuscripts from the estate of British diplomat William George Aston (1841-1911) and with subsequent gifts from the collections of Sir Ernest Mason Satow (1843-1929) and Heinrich von Siebold (1852-1908). Some of these books may be viewed in the Cambridge Digital Library. Selections from these collections are included in the entrance hall display.

Beginning in 1985, Professors Nozomu Hayashi and Peter Kornicki catalogued all of the early Japanese books and manuscripts then at the UL, building on the work of University Librarian Eric Ceadel (1921-1979) and others. Professor Kornicki later transformed this work into the beginning of the online ‘Union Catalogue of Early Japanese Books in Europe’.

Cataloguing of the contemporary research collection of Japanese-language books has also progressed greatly in the past 20 years. Early versions of the library’s online catalogue could not handle Japanese characters. Librarians created Romanised records for the main catalogue and made alternate catalogues in Japanese and Chinese. Today, our main library search, iDiscover, integrates Japanese and Chinese with the other books. Thanks to the legacy of alternate cataloguing for Japanese books, we also contribute to a powerful UK Union Catalogue of Japanese Books, which allows flexible searching in an interface designed for the Japanese language. 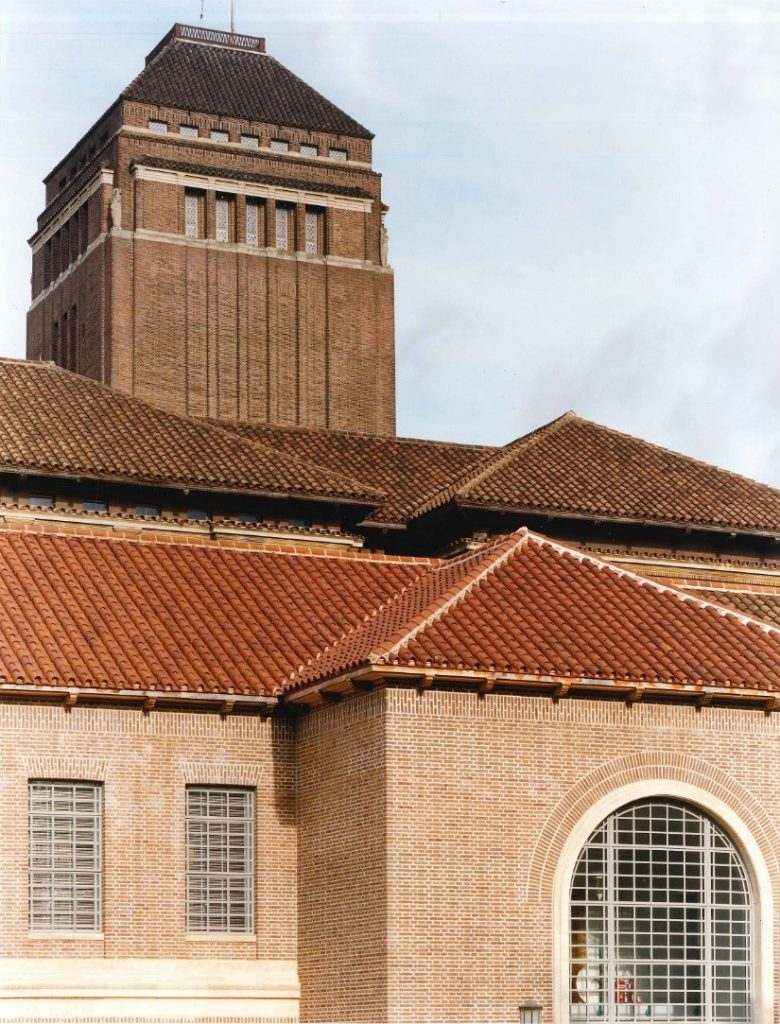 The library tower rises above the ceremonial entrance of the newly completed Aoi Pavilion, c. 1998

Aoi, a Name with Literary Resonance

This plant appeared frequently in classical poetry because an older spelling (afuhi あふひ) of the name also meant ‘the day of meeting’. In the early 11th century novel, the Tale of Genji (Genji monogatari), the word appears in poetry and also serves as the informal name of a principal female character and as the name of a chapter. In his translation of the Tale of Genji (Genji monogatari), Edward Seidensticker translated the plant name as ‘heartvine’ and ‘vine of meeting’ because of its heart-shaped leaves and the need to fit the word into poetry. In other cases, the Japanese plant may be translated as ‘wild ginger’ or ‘hollyhock’.

We hope that you will take the opportunity of this anniversary to explore the Japanese collections at Cambridge University Library, whether online or in person. Members of the public are welcome to view the entrance hall exhibit until 11 July 2018. Researchers over 18 years old may also register to join the library as readers. 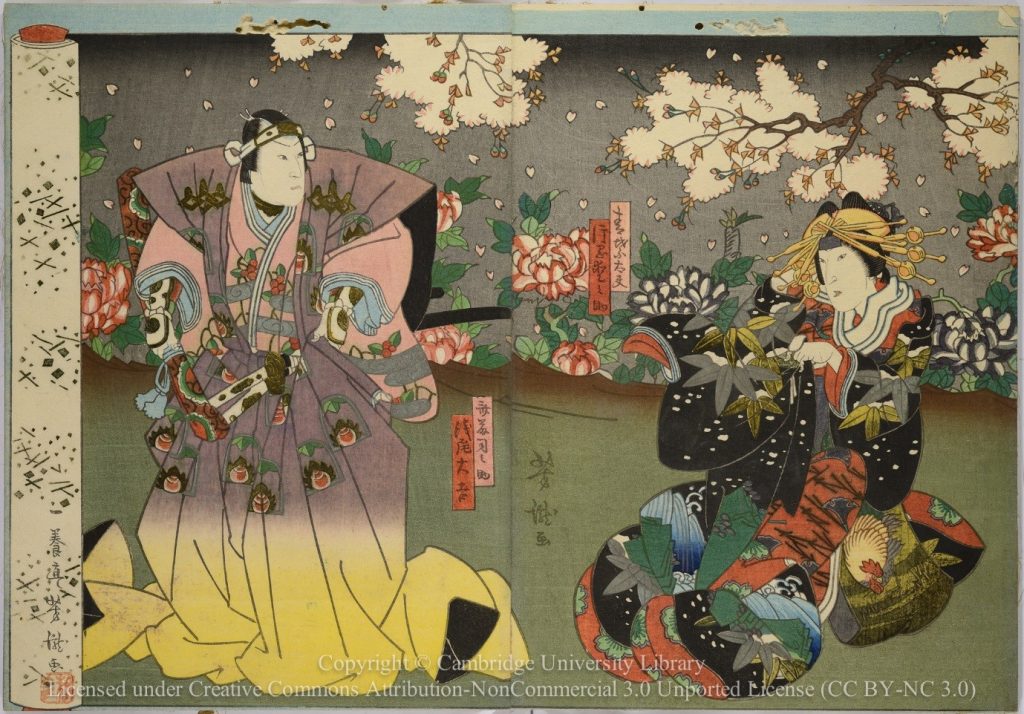 From Naniwa haiyū nishikie (FJ.961.36), a highlight of the entrance hall exhibit