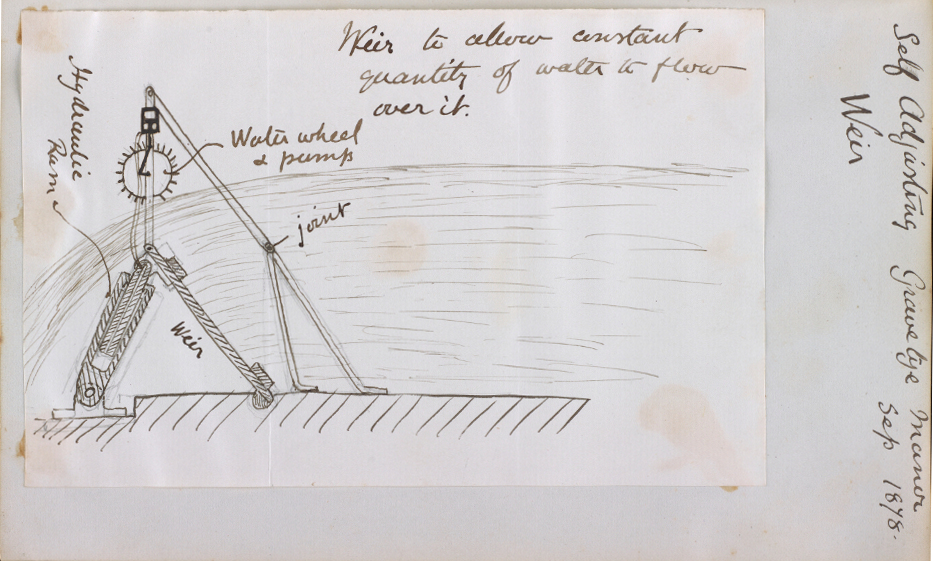 This image is taken from a notebook kept by Horace Darwin to record his ideas for all manner of mechanical devices, including a self-adjusting spanner, brakes for India rubber tyres, an electro-magnetic traction engine and this, a self-adjusting weir.  By using an axle, a hydraulic ram, and a water wheel to power pumps, it allows for a constant quantity of water to flow over the weir.

Darwin, the ninth child of the naturalist Charles Darwin and his wife Emma, began recording his ideas in this notebook in 1873 whilst he was an undergraduate in Cambridge.  After graduating BA in 1874, he spent the next three years as an apprentice at an engineering company where his interest in mechanical devices and scientific investigations proved invaluable in his work designing and building scientific instruments.  In 1877 Darwin returned to Cambridge and began constructing apparatus and research equipment for University friends involved in the burgeoning scientific work being carried out at Cambridge, much of it now dependent on precision measurements and recording of events.  In 1878 the University set up its own in-house instrument makers, but it proved unable to supply the necessary equipment, and in 1881 Darwin, in partnership with A.G. Dew Smith, formed the Cambridge Scientific Instrument Company to service the growing demand.  Initially the company supplied the University and prominent scientists associated with Cambridge, such as Lord Rayleigh and J.J. Thomson.  It then sold instruments to schools and colleges as scientific experimentation became more widespread in the classroom, whilst Darwin also started to develop instruments for industry, which was becoming increasingly reliant on instruments for process control.

Darwin continued to use this notebook until 1890, though most of his notes date from his time as a student and during his apprenticeship.  The ideas mostly involve basic control mechanisms and the more detailed analytical and measuring apparatus, which he would go on to design, do not feature.  However, the diagrams and notes show the workings of an innovative and sophisticated engineer, very much ahead of his time.

The notebook is part of the Cambridge Scientific Instrument Company archive, which contains a wide range of material relating to the development and work of the company.  It is available for consultation in the Manuscripts Reading Room.  For more information, contact the Manuscripts department.