A very individual artist: Arthur Szyk and his world

Posted on 20 January 2012 by Catherine Ansorge 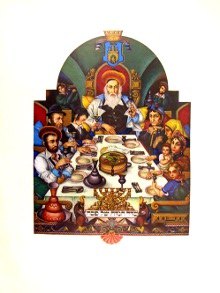 Opening image of the Haggadah showing the table set for the Passover Seder meal. Rel.b.94.4

The Library has recently received a generous donation of a copy of the very fine Passover ‘Haggadah’ illustrated by Arthur Szyk, the 20th century Polish artist and illustrator, and published in 1939. In 2010, the Library also received as a gift a copy of the facsimile edition of the same work, published in 2008. Arthur Szyk (pronounced ‘Shick’) became famous as a graphic artist, book illustrator, miniaturist, and cartoonist. He was born in 1894 into a Jewish family in Lodz, Poland, and later studied in Cracow.

He showed noticeable artistic talent from very early in his life and, as a child, he especially enjoyed drawing scenes from the Bible. His father sent him to pursue his artistic talents in Paris but, despite being open to the influence of modern artistic styles developing at the time, he chose to continue with his own personal drawing style. This derived from, and reflected, the traditions of medieval and Renaissance painting and especially the style of illuminated manuscript decoration.

In Paris he developed his artistic style from simple monochrome drawing in pen and ink into the style full of the luminous colours which characterised his later works. He produced several illustrated books, among them ‘The Book of Esther’, Flaubert’s ‘Temptation of Saint Anthony’, Pierre Benoit’s ‘Jacob’s Well’, and Ludwig Lewisohn’s ‘Last Days of Shylock’.

In the years from 1932-36 he illustrated his best-known work, the Haggadah. It is, without question, one of the most beautiful of all illustrated versions of the work ever produced. The Haggadah (literally “the telling”), is the Hebrew text that sets forth the order of the Passover Seder text and ritual in Jewish tradition. The text describes the liberation of the Jews from slavery in Egypt as described in the Book of Exodus, and it is one of Judaism’s best known works of religious literature. The earliest complete manuscript copy dates back to the 10th century and many beautiful manuscript copies of the Haggadah have been produced since that time; the first printed copy, from Italy, is dated 1486. The text has been used during the ritual meal of Passover (Pesach) for more than a thousand years and traditionally it is the Hebrew religious text which is most often illustrated, often with rich and detailed illuminated pages. 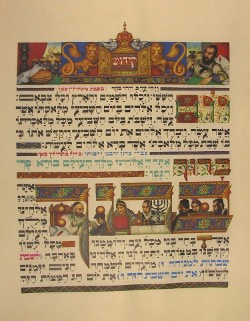 Text page of the Haggadah with text interwoven with illuminated detail. Rel.b.94.4

Szyk completed his Haggadah during Hitler’s rise to power; an enduring work of hope and courage and an expression of an artist’s love for his people and their religious traditions. As a Polish Jew, well aware of current political events, Szyk used sources from his dual passions for art and history and fused them into a visual commentary which drew attention to the dangerous parallel between the Passover story of oppression in ancient Egypt and the alarming developments taking place in Nazi Germany in the 1930s. The end result was astonishing, but it proved impossible to publish such a work in Continental Europe at the time, even though he had painted out some of the more obvious visual references to oppression which he had originally included. So the work was eventually printed in London in 1939 by the Beaconsfield Printing Press set up for this precise purpose by his collaborator, the Jewish historian, Cecil Roth.

Later in life he also produced a series of miniatures on the history of the American Revolution which was sent as a gift to President Roosevelt. In England, at the outbreak of World War II, he turned his pen to caricatures for British papers and periodicals. 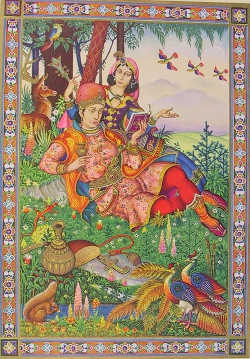 Illustration of one of the verses of the

In 1940, Szyk moved to the United States where he became a very popular artist and exhibiting his work widely. His works became significant in the American War propaganda and he referred to himself as ‘a soldier in art’.

He also illustrated books such as the ‘Book of Job’, Hans Andersen’s ‘Fairy Tales’, the Edward Fitzgerald version of the ‘Rubáiyát’ of Omar Khayyam (1940) and many others. He eventually settled permanently in Connecticut, where he took America citizenship, and died there in 1951.

Szyk was renowned for his refined draftsmanship and calligraphy; his colours had the luminosity reminiscent of those found formerly in Gothic stained glass window designs. This is shown in both The Haggadah and in his highly decorated ‘Declaration of Independence for the State of Israel’ (1948). His Hebrew lettering was superbly decorative and his illuminations show an intimate knowledge of the traditions of Jewish history and legend.

The images are reproduced with the cooperation of The Arthur Szyk Society, www.szyk.org.