Missionary journey to Uganda in 1900 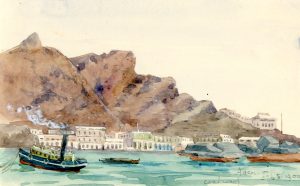 One of the Royal Commonwealth Society’s most atmospheric collections of artwork (RCMS 158) was created by Annie Emma Allen (1853-1942), who documented her journey to Uganda in 1900, where she began her career as an honorary missionary with the Church Missionary Society.  Allen formed one of a party of five female and two male missionaries, and she recorded each stage of their travel from the United Kingdom to Lake Victoria in an album containing 66 watercolours.  The watercolours are dated, and together with frequent annotations, provide vivid impressions of the people and places that Allen encountered upon a long and arduous trip between January and March 1900.  RCMS 158/1-8 portray the outward journey to Port Said; 9-19 show Sinai, the Red Sea and Aden; 20-25 were painted in Mombasa and Freretown; and 26-66 illustrate the trip from the railway terminus at Kilindini to Lake Victoria. 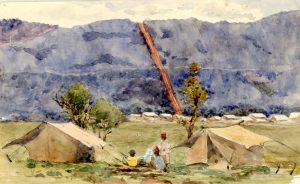 From Mombasa, the party travelled upon the East African railway to the end of its line at Kilindini, and Allen painted several very interesting watercolours illustrating work to push it further into the hinterland, at times over rough and hilly terrain.  RCMS 158/31 (at left) at the Kikuyu Escarpment records ‘the extremely steep descent over which the line is to pass. The trains are to be let down by wire ropes. The white tents in the distance are those of the Railway employees; they have 500 mules there for use on the works. The two big tents belong to our porters. The height down which the railway is being constructed is all wooded.’ 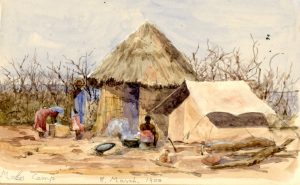 For the next stage of the journey the missionaries mounted bicycles, usually completing about 15 miles a day and sleeping under canvas.  On one occasion they so far outstripped their porters that they spent an uncomfortable night with little food in a borrowed tent.  RCMS 158/42 (at right) illustrates the incident, ‘Inside Boma (fort) where we spent the night of March 7 all five ladies (like sardines in a tin) in one small tent, lying on mule rugs. The two gentlemen sleeping outside, each side of the tent. This was when we rode thirty-one miles, and left the caravan miles behind.’  Allen’s painting becomes even more remarkable considering it was often done hurriedly in the morning or at the end of an exhausting day of travel and in failing light. Several of the watercolours bear the despairing captions, ‘Too dark to finish. Imagine beautiful scenery’ and ‘Quite lovely scenery, but so little time to draw.’ 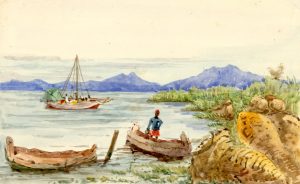 Travel to Lake Victoria was completed on foot because of fallen trees and deep ox waggon ruts which made cycling on the rough roads impossible.  The steamboat ‘Ruwenzori’ which had been sent to meet the party was wrecked on the way, so it had to sail across the lake into Uganda in an Arab dhow. The dhow is depicted in RCMS 158/62 (at left) ‘Groundsheet for awning, at first lay on bare boards with bed bags as bolsters, afterwards got our pillows, mattresses etc., got on board at midnight, rowed out to it in dugouts, on dhow seven English passengers, twelve boys.’  From the landing stage, a short cycle finally brought the missionaries to Mengo. 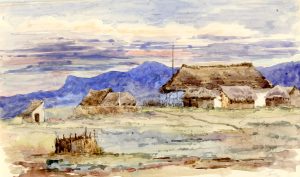 Allen would serve as a CMS missionary in Uganda for the next 25 years, teaching and working in hospitals and dispensaries.  She retired in 1926, at the age of 73, and returned to Britain.  The RCS library holds the photograph collection of the CMS, documenting the society’s work in Uganda and elsewhere, and its glass negatives and lantern slides may be viewed on Cambridge Digital Library.  Those interested in Allen must also get in touch with our colleagues at the University of Birmingham’s Cadbury Research Library, which holds the CMS archives.  These include another album of Allen’s beautiful watercolours and correspondence she wrote to family and friends in Britain describing Uganda, its peoples and her work as a missionary.