Posted on 18 September 2018 by Special Collections

The following post has been written by Ester Peric, an intern in the Rare Books Department for the month of August updating MEI records (material evidence in incunabula) for the Library’s fifteenth-century printed books. Ester has an MA in Italian Philology and Literature from the University of Udine, and will speak later this week at the conference Printing Revolution and Society 1450-1500 in Venice (19-21 September). 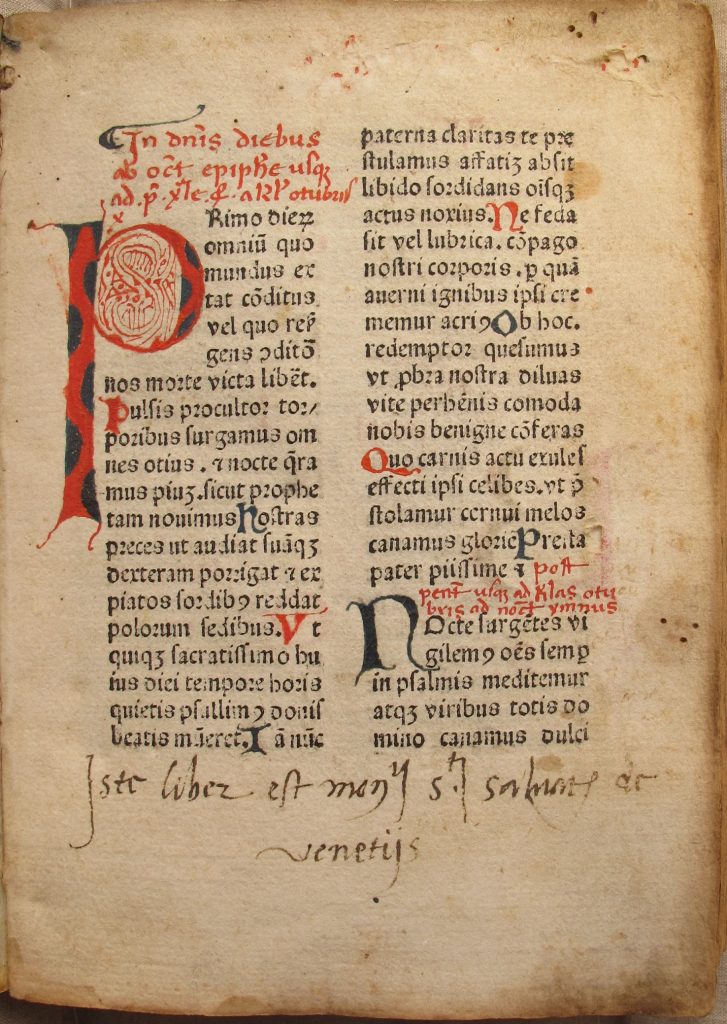 Throughout August I worked as an intern at the Rare Books Department of Cambridge University Library thanks to the CERL Internship and Placement Grant 2017/18. I chose to work on Italian editions and managed to update 125 MEI records relating to incunabula printed in Padua, Treviso, Mantua, Verona, Parma, Cremona and Vicenza. During this survey, I had the chance to examine extremely rare books, some of which survive in a single copy, now part of the University Library’s collections. These included the Officium sancti Homoboni, printed in Cremona probably around 1495, and the little Psalterium assigned to the press of Michele Manzolo in Treviso.

I came across books with fine decoration, like the Biblia latina published by Leonardus Achates in 1476, probably in Vicenza (Inc.2.B.25.1[2214]), which has fine initials in alternating blue and red with pen-work decoration in pale red, blue and green at beginning of books, all supplied by an Italian fifteenth-century hand. Fascinating too was the De evangelica praeparatione of Eusebius Caesariensis, printed in Treviso by Michele Manzolo in 1480; the CUL copy is rich in fifteenth-century drawings (example at the head of this post, showing the judgement of Paris, with Juno, Venus and Pallas Athena in the nude) and historiated initials within decorated frames, supplied in pen and ink by an accomplished though amateurish hand. The drawing on leaf a3 verso represents two youths in front of a notary. Three bound books can be seen lying on a table, with studs on the boards, and leather strings on all the sides. On leaf l3 verso is a mythological scene of the judgement of Paris. Other notable things I came across, within this selection of Italian incunabula, were a fallen type in the Soliloquia of Appianus printed in Cremona in 1496, and an unusual bookmark (an ancient rusty pin) in the copy of De rerum natura published in Verona in 1486. 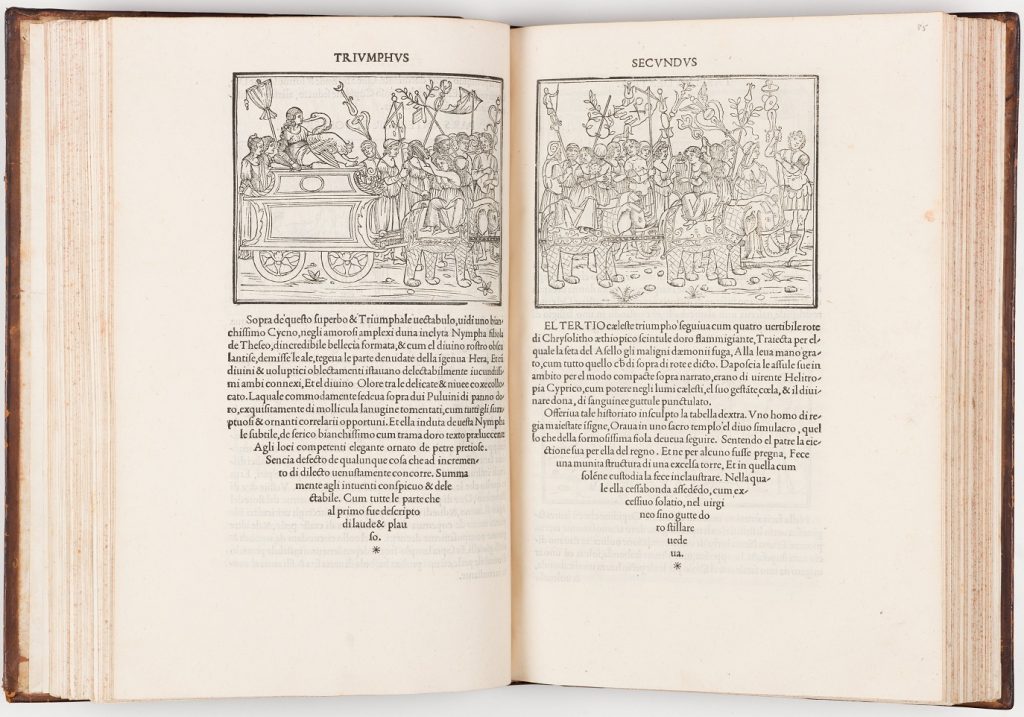 All the books I’ve mentioned, as well as all the other Italian incunabula, have already been described in detail in the Library online catalogue (iDiscover) by Dr. Laura Nuvoloni, during a five-year cataloguing project. When the catalogue records were imported into MEI, this rich data was altered in its structure, and my work re-structures the information, following MEI guidelines, linking provenance evidence to time, people and places, and adding information such as the size of the leaves and description of watermarks. The result is very satisfactory, since the updated MEI records allow users to follow the history of CUL incunabula through the centuries, from the place in which they were printed, to their various owners around the world, and finally to the Library.

During my internship, I also helped Professor Neil Harris to collate copies of the Hypnerotomachia Poliphili, printed by Aldus Manutius in 1499 (CUL has two copies). This is done with a McLeod Collator, invented by Professor McLeod in the 1980s, with the purpose of detecting even the smallest variants between copies of to the same edition, thanks to the clever use of mirrors. This interesting machine attracted the interest and the curiosity of the staff, and on my last day we held a little session about how to set up and use this instrument… 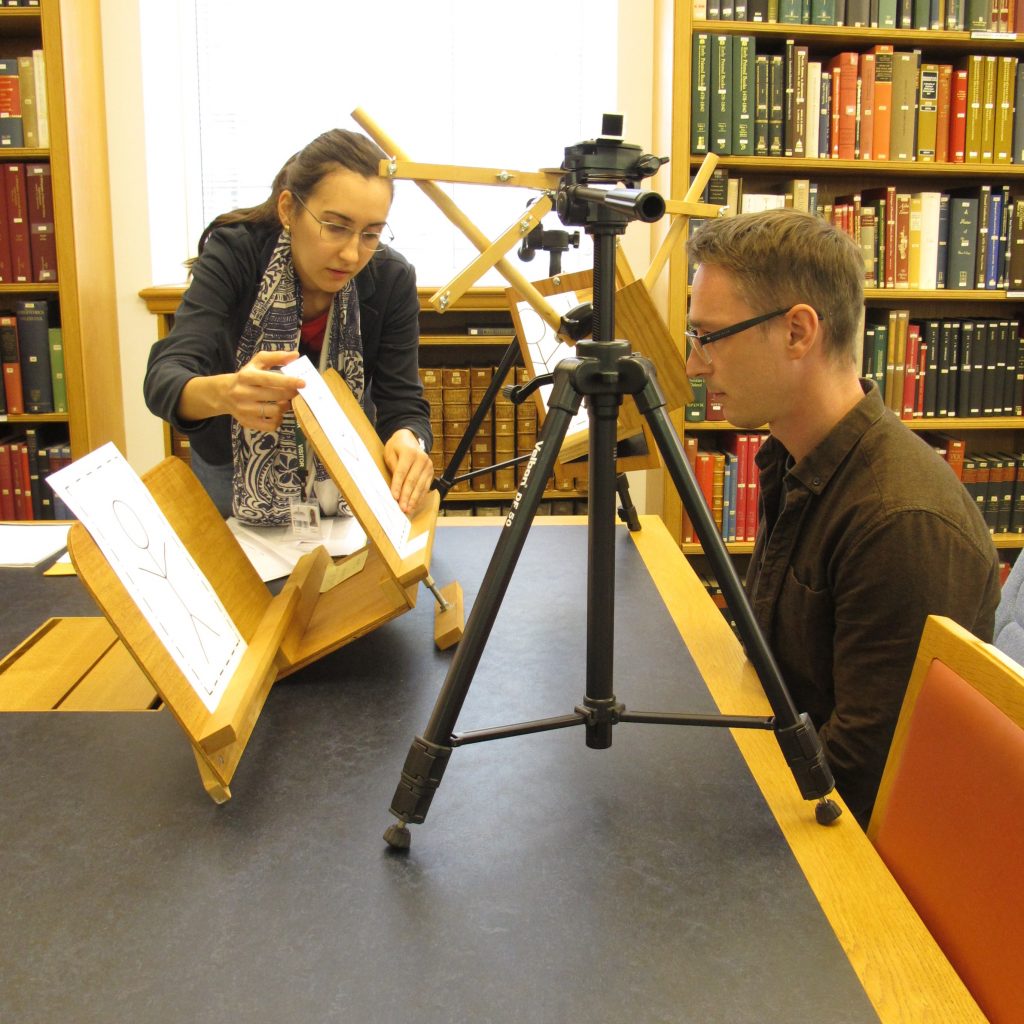 The collator in action!