Recognising books made in Cambridge: the Cambridge Bookbindings Project

Posted on 29 October 2018 by Special Collections 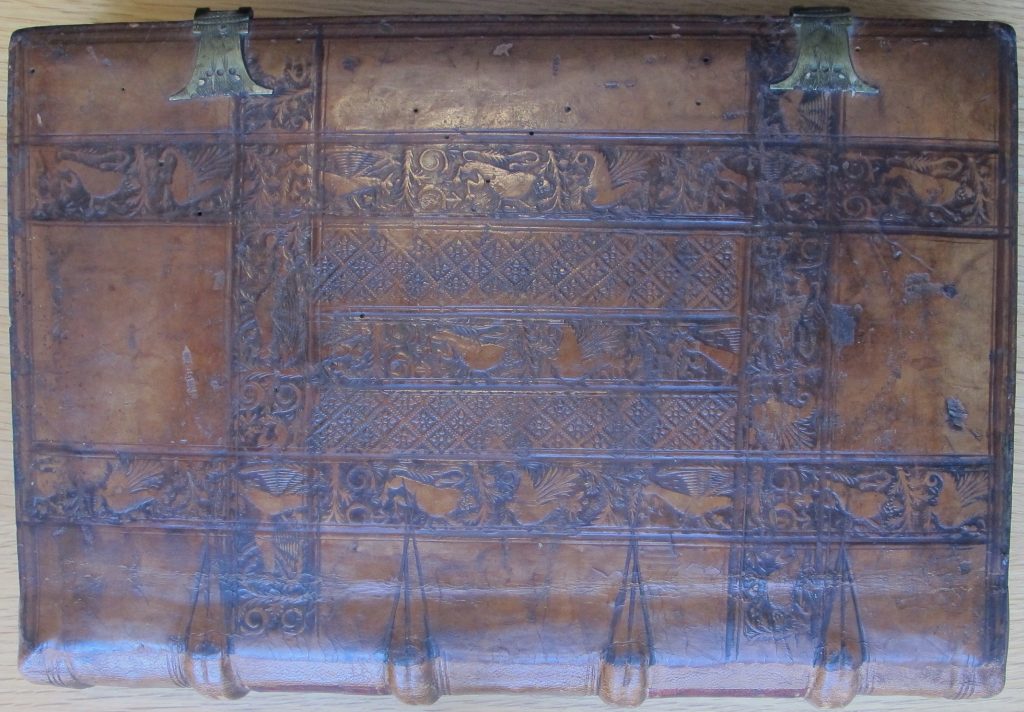 This post is by Dr David Pearson, until 2017 Director of Culture, Heritage and Libraries at the City of London Corporation, who is currently engaged in a project with the Library’s historic bookbindings.

Cambridge has always been a place with books at the heart of its activities, a place where they have for many centuries been printed, sold, bound, owned, stored, read and used.  All these aspects of Cambridge book culture have been studied and documented in varying degrees and there are many standard reference sources to which we regularly turn.  As regards bookbinding, the picture is an incomplete one; Cambridge, along with Oxford and London, was one of the three major centres of English binding work from the middle ages onwards, and huge numbers of books were made into finished and functioning objects in the workshops of Cambridge binders.  Until the middle of the 19th century, when mechanisation came to the trade, each of these bindings was a unique, handcrafted item.  Some historic Cambridge binders have been studied and documented, and we now regularly recognise early 16th-century bindings from the workshops of Garret Godfrey or Nicholas Spierinck, 17th-century ones by Henry Moody and Daniel Boyse, 18th-century ones by Edwin Moor. 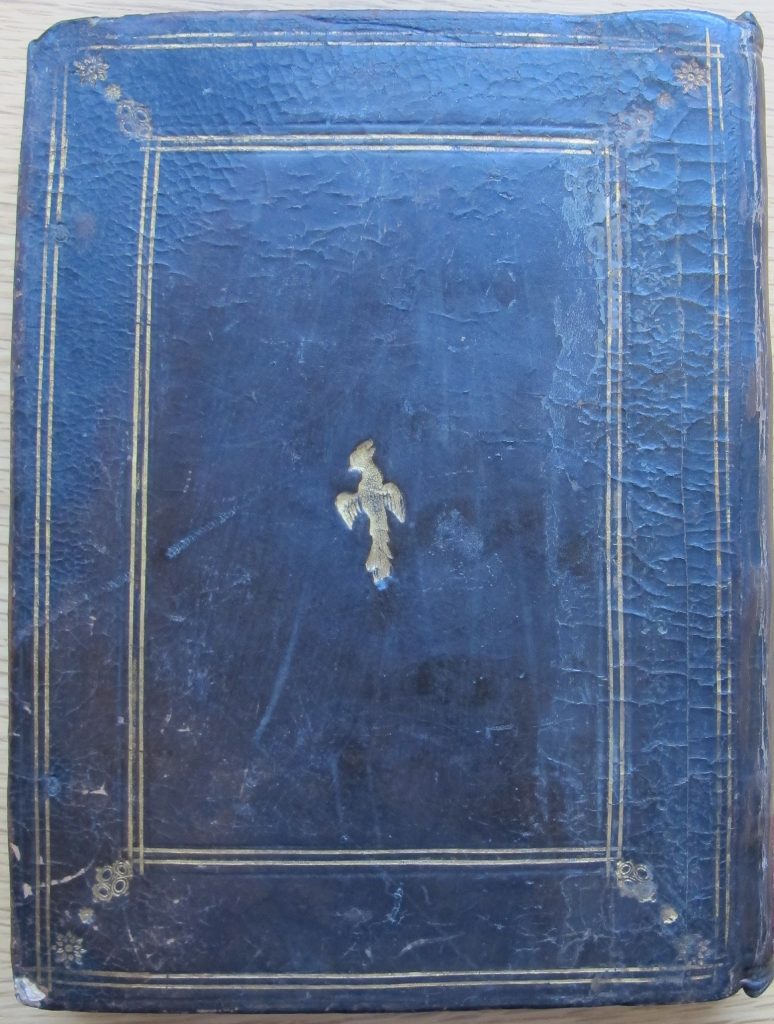 A flying pheasant is one of the more readily recognisable tools used in Cambridge in the early 17th century; a relatively simple binding from a workshop which also produced much more elaborately-decorated work (Adv.d.48.10, Aelfric, A Saxon treatise, London, 1623)

In common with binding studies more generally, much of the work to date has focused on binders who produced highly decorated, upmarket bindings, although these always comprised only a small proportion of the trade’s total output.  Cambridge was noted as a centre of fine binding work in the 17th century, and it is good to identify and appreciate surviving examples, but in the context of Cambridge binding work of that time more broadly, we are looking only at the tip of a large iceberg.

With the help and support of the Rare Books staff, I have been working since early 2018 on a project to create a more rounded picture.  Its aim is to document Cambridge binding work as comprehensively as possible, from the 15th century to the 18th, so that all kinds of books made here can be recognised and dated.  Its outputs are envisaged both as a book and as an online resource, via the UL website, and we are currently investigating options and possible digital platforms; the benefit of this, of course, is that it will facilitate the posting up of lots of images.  Bindings are generally most immediately identified from their decoration, as leather-covered books were usually stamped with engraved brass tools which were themselves unique.  The catch is that many such tools are small, and very similar in design to others used concurrently elsewhere; recognition is possible, but needs to be done with care.

I hope that this will be useful not only to bibliographers, curators, cataloguers and collectors but also to a wider pool of researchers who regularly fill the Rare Books and Manuscripts reading rooms in Cambridge and elsewhere.  Lots of books are handled every day in those rooms, bound in Cambridge, but not recognised as such.  At a time when we are increasingly appreciating the importance of a whole-object approach to books as material texts, when we are asking questions about the use, reception, and impact of books, it should not be hard to see the value of knowing where and when a book was bound.  If a book has a 17th-century Cambridge binding, there is a strong likelihood that it was being read and used there at that time. If it is a 16th-century book being bound much later, we can ask why that might be – because it had been heavily used, and needed repair, or because someone had another motive for having a different binding on it? All handpress-era bindings, from the cheapest to the most expensive, represent a choice around how much was spent on them, and once we understand the spectrum of options, we can think about the possible motives behind those choices. 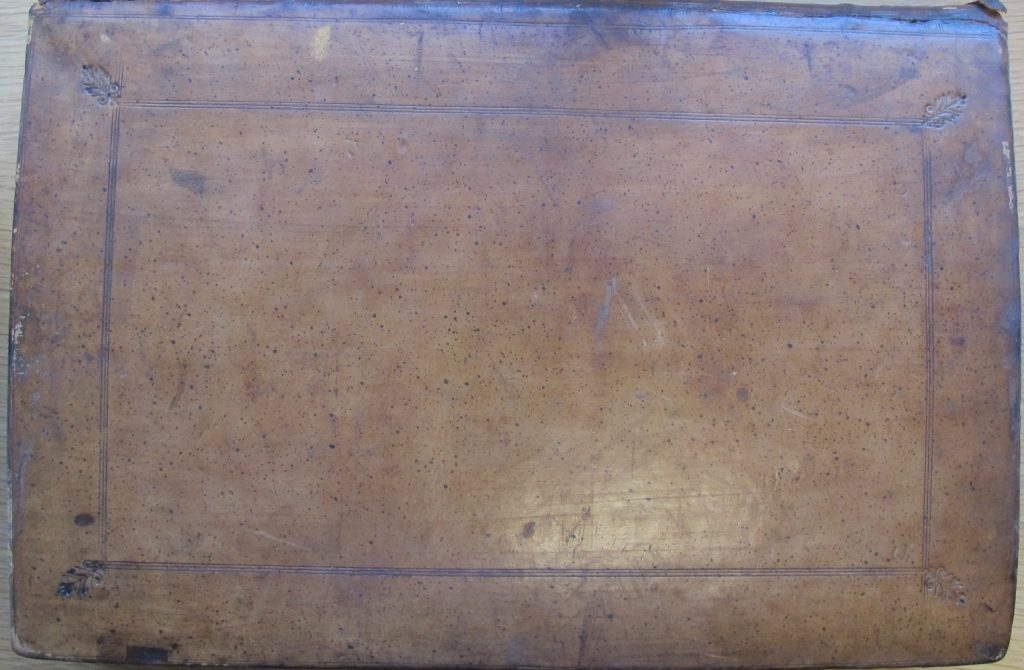 Jonathan Pindar, one of a dynasty of men of that name who served the UL as Librarian in the second half of the 17th century, undertook a great deal of rebinding work on earlier books and MSS, mostly producing simple work like this (B*.1.13(A), Missale Romanum, Paris, 1627)

The evidence base for the research is firstly the huge number of Cambridge bindings sitting on the shelves of the UL, to be supplemented with the similarly rich holdings of the college libraries (I hope to be knocking on those doors during coming months).  Cambridge bindings are also, of course, found in libraries all over the world and I will cast the net wider along the way.  Primary archival evidence of early bookbinders is notoriously scarce – much of what survives are the random scraps of account books cut up and used to make endleaves – but I need to look at what can be found in University and City archives.

I hope that more information will appear online as the project develops, but meanwhile I am always happy to talk more about what I am doing, and answer as best I can any queries about bindings which are, or may be, Cambridge work – please feel free to contact me at dp552@cam.ac.uk.