Fit for a King: Designing a box for King Cetshwayo’s ostrich feather

Posted on 4 April 2019 by Gretchen Allen

The University Library’s collections are primarily books and archival paper materials, but within our stores lie a number of unusual treasures. These objects range from the expected (medallions and portraits featuring former librarians) to the unusual (a tiny ivory skeleton, a single boot) to the bizarre (we used to have a mummy!). This eclectic and fascinating collection of objects was showcased in the 2017 special exhibition “Curious Objects”.

One of the items in this exhibition was a large, beautiful ostrich feather given to the daughter of a British official in South Africa by the King of the Zulus himself, Cetshwayo kaMpande. The exhibition described the feather as follows:

“Cetshwayo invited Theophilus Shepstone, Native Secretary of Natal, to preside over his installation as king in 1873. The crown for the ceremony, seen in the accompanying contemporary photographs, resembled a Zulu warrior’s headdress. The central feature was a large crimson-dyed ostrich feather given by Shepstone’s daughter Florence. Cetshwayo presented this smaller feather as a wedding gift to Florence and it was bequeathed to the Royal Colonial Institute by her son O. I. Mathias.”

The feather was displayed beautifully in the exhibition on a bespoke perspex support, along with a framed photograph of Cetshwayo’s headdress and a small, handwritten description of the feather’s origin. However, after the exhibition, the feather and its accompanying objects did not have an appropriate storage container. They were haphazardly stuffed into a cramped box, along with foam versions of the display supports that had been made for them. This was a precarious position for an object as delicate as a feather, and needed to be rectified for its long-term preservation.

The box was an interesting challenge because the primary feature of the feather is its large, dramatic curve that made a traditional book box impractical. The feather required a support much like the one made for the exhibition to maintain its shape and support its delicate fronds. However, a support for storage requires different design elements than a support for display. The display support will stay in place in an enclosed case, with very little movement that might disturb the feather. It is also primarily meant to show the feather to great effect: the display design features a raised ridge that runs along the center of the support under the spine of the feather, allowing the fronds to drape over the unobtrusive stand. A storage support, however, needs to act more like a cradle: supporting the object in a way that will keep it still when moved, without creating additional stress. Ideally, the storage support would also be aesthetically complementary to the object, allowing for it to be used as a temporary display support.

The feather, photograph, and handwritten description needed to be placed securely in a box. The box needed to be constructed around the bespoke support created for the feather, which would dictate the box’s eventual size. The support, therefore, needed to be designed first. I essentially inverted the design used for the display support, creating a curved support with a concave surface that would act like a cradle. The design was created through the use of technical drawings and multiple small-scale models, both in paper and in Plastazote, which is the archival foam that was used for the final support. The design of the box was extrapolated from the shape of the feather support: the photograph and handwritten description would be kept in a nested cutout in the base of the box, and the feather support would sit on top of them in a second nested cutout that allowed for 3 cm of space between the edges of the base of the support and the walls of the box. This was to eliminate the risk of any damage to the feather caused by the opening and closing of the lid of the box and to prevent the support from moving inside the box and dislodging the feather. The walls of the base of the box included cutouts to facilitate removal of the feather support, and prevent vacuum suction being created when the box is opened. For photos of the design and model-making process as well as the finished box, see the gallery below.

The objects were placed in the box, each of them with their own support. The photograph was stable and well-protected in its frame, and was placed in its nested cutout in the base of the box. The handwritten description was encapsulated in Melinex, an archival clear plastic, and placed on top of the framed photograph. The feather was secured to the support using linen thread, which can easily be cut and replaced if the feather needs to be removed, and the support and feather was placed on top of the photograph and description. The box was labeled in gold-tooled leather. 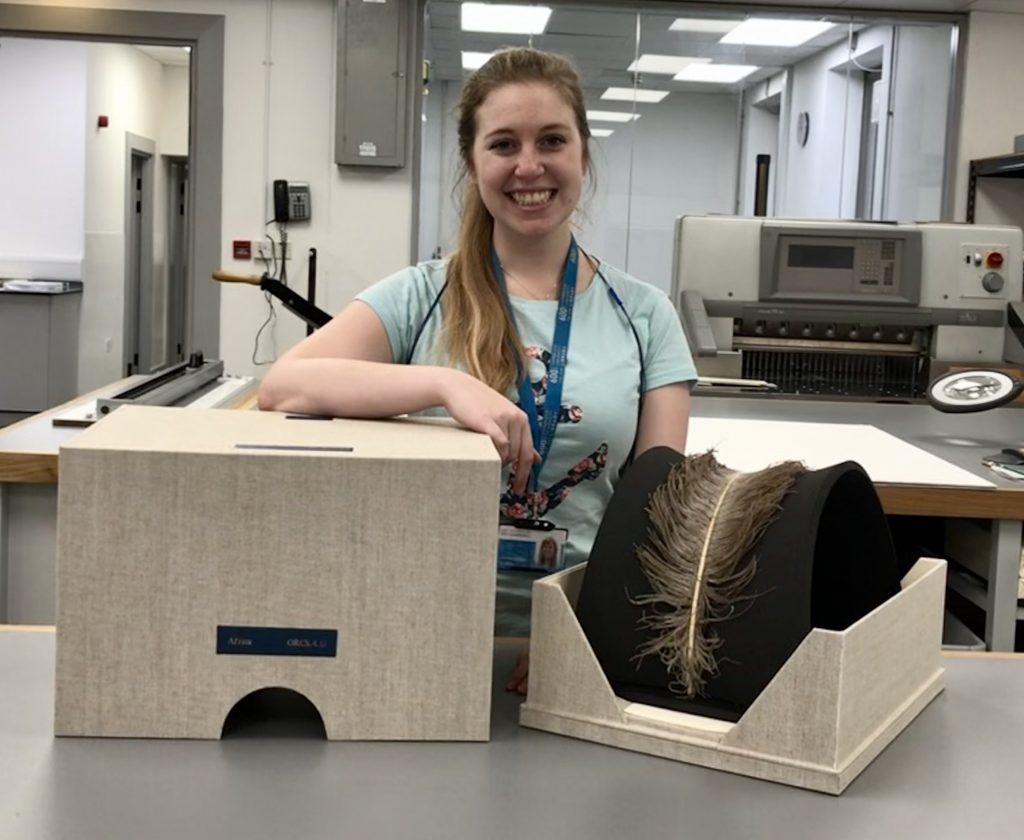 The author with the finished box

The resultant box is a secure, supportive, archival solution designed specifically for the needs of this unusual set of objects. The support keeps the feather securely in place and removes stress while preserving its unique shape. The accompanying photograph and description were also securely stored along with the feather. The history of the objects as well as the design challenge they offered proved to be fascinating–their final home, finished with gold lettering, is truly fit for a king. 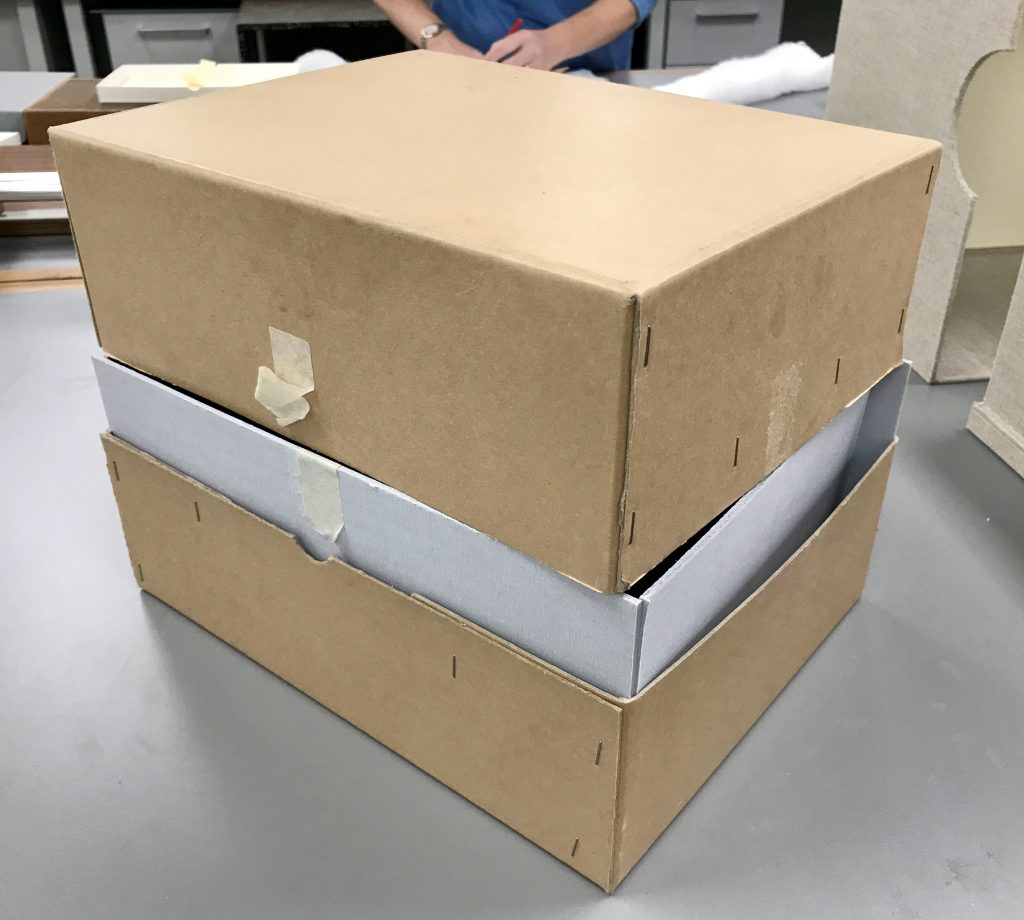 The original box for the feather and associated objects 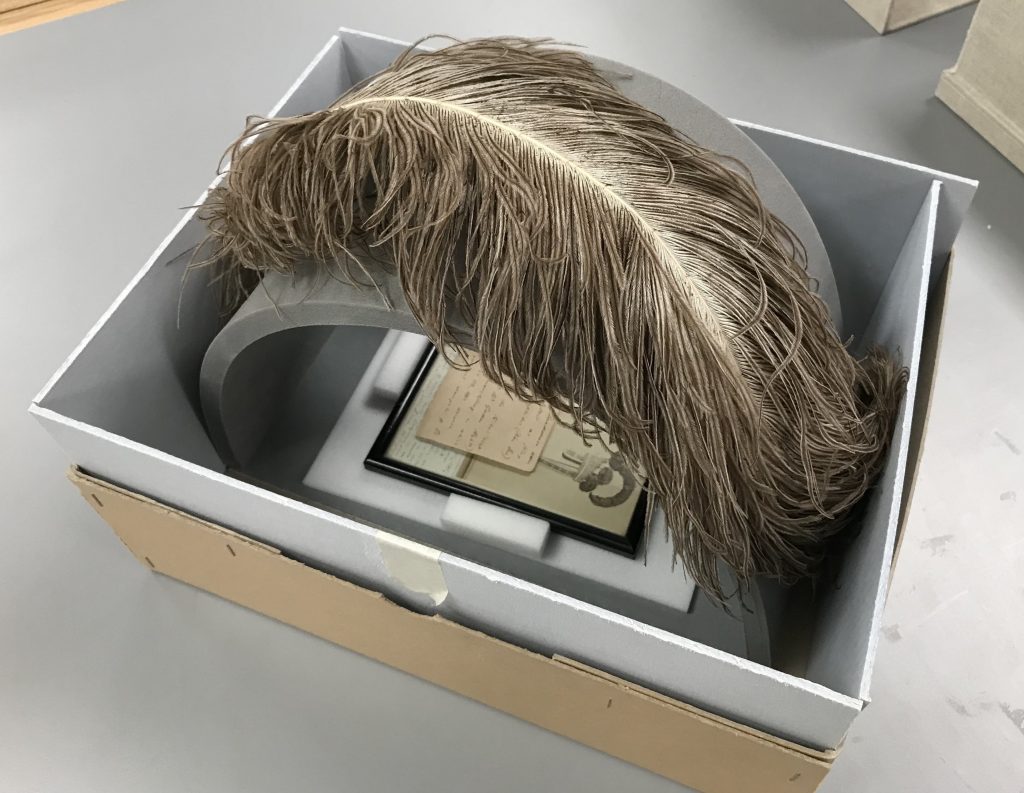 The feather, photograph, and supports in the cramped, inadequate box 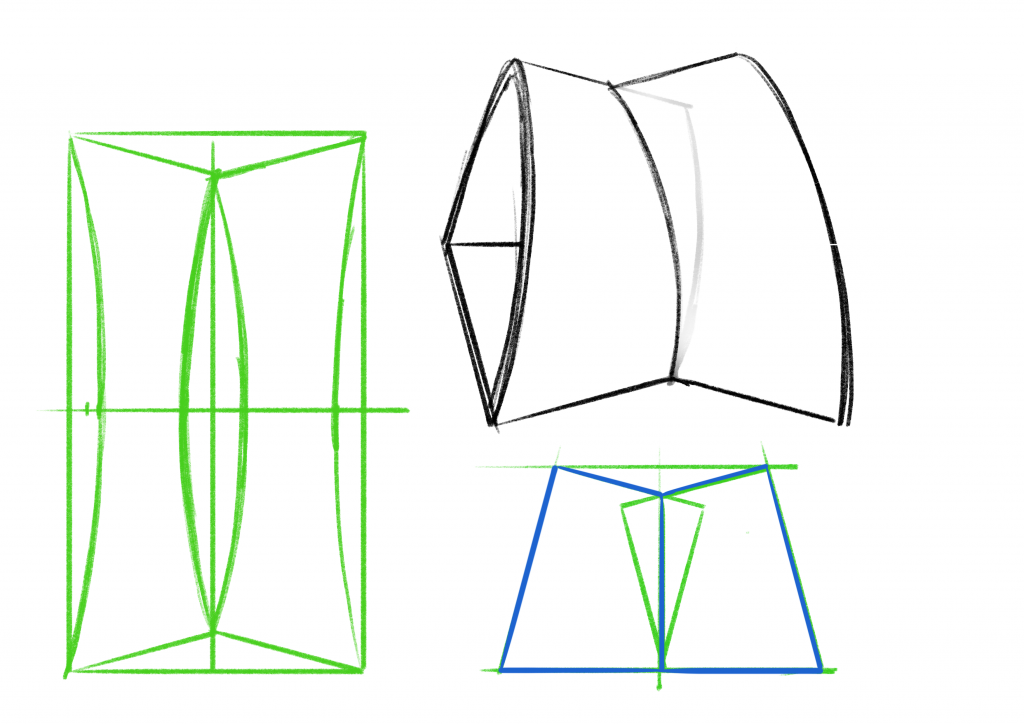 Original design for the feather support 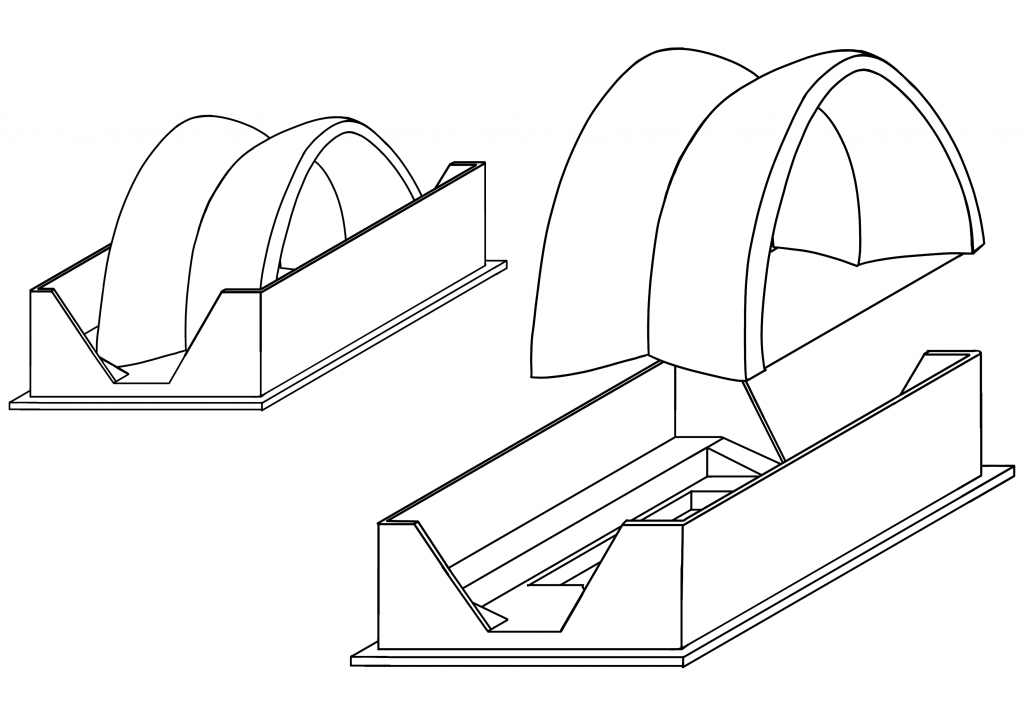 Design for feather support and base of the new box 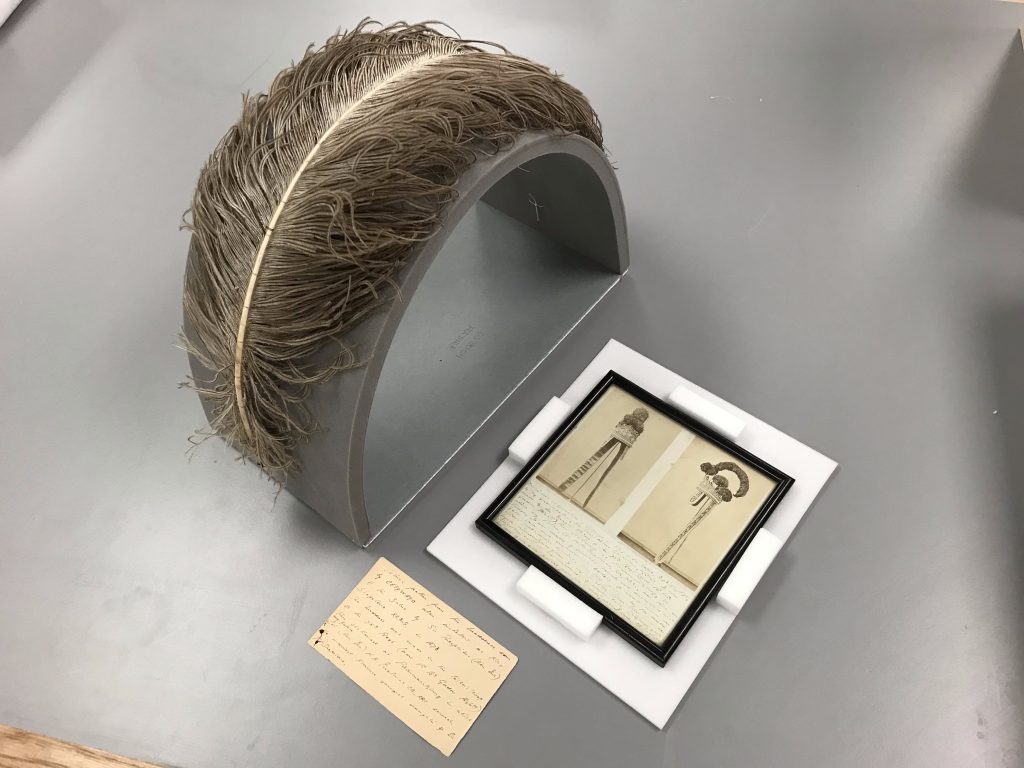 The feather, photograph, and handwritten description outside the original box 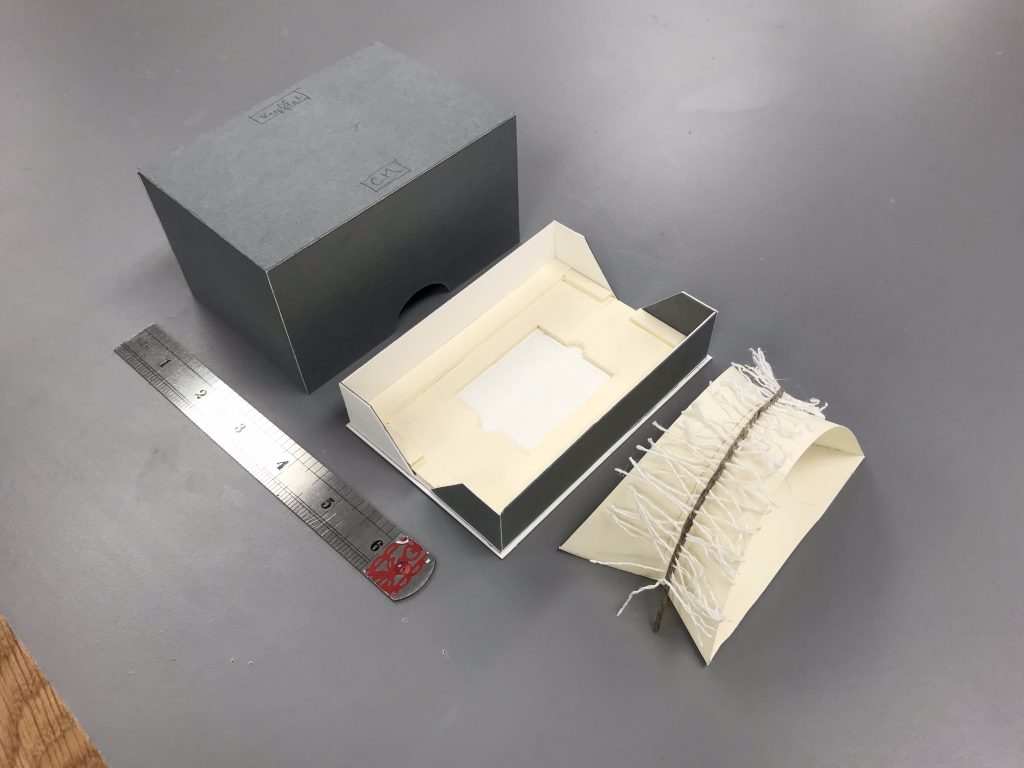 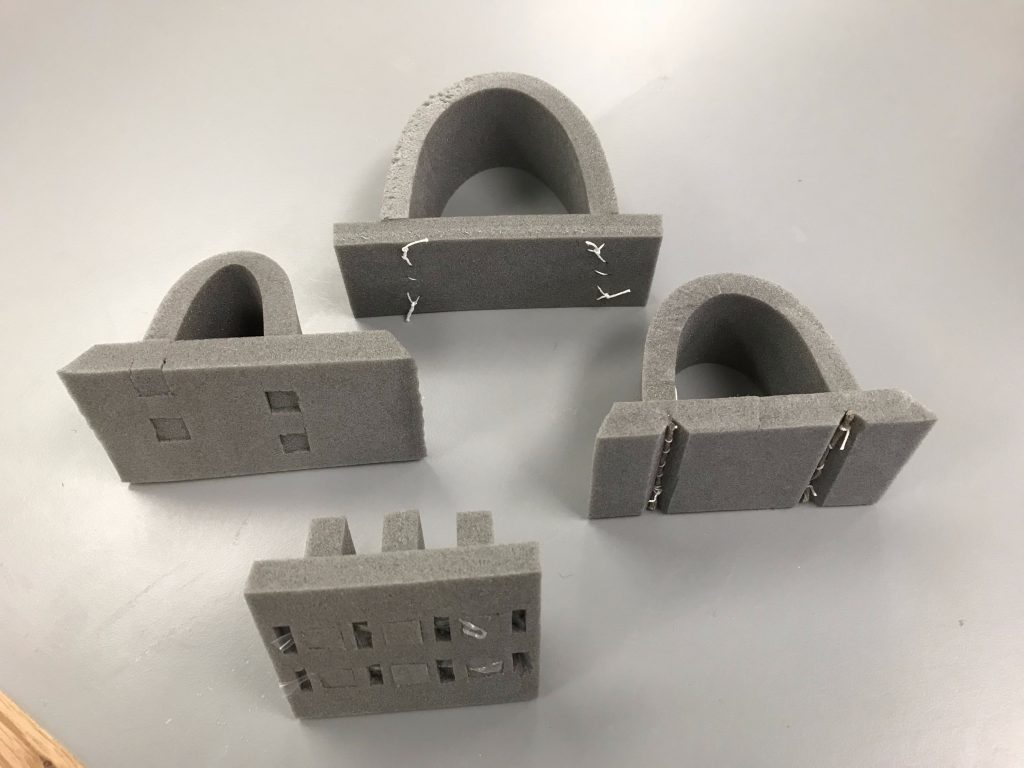 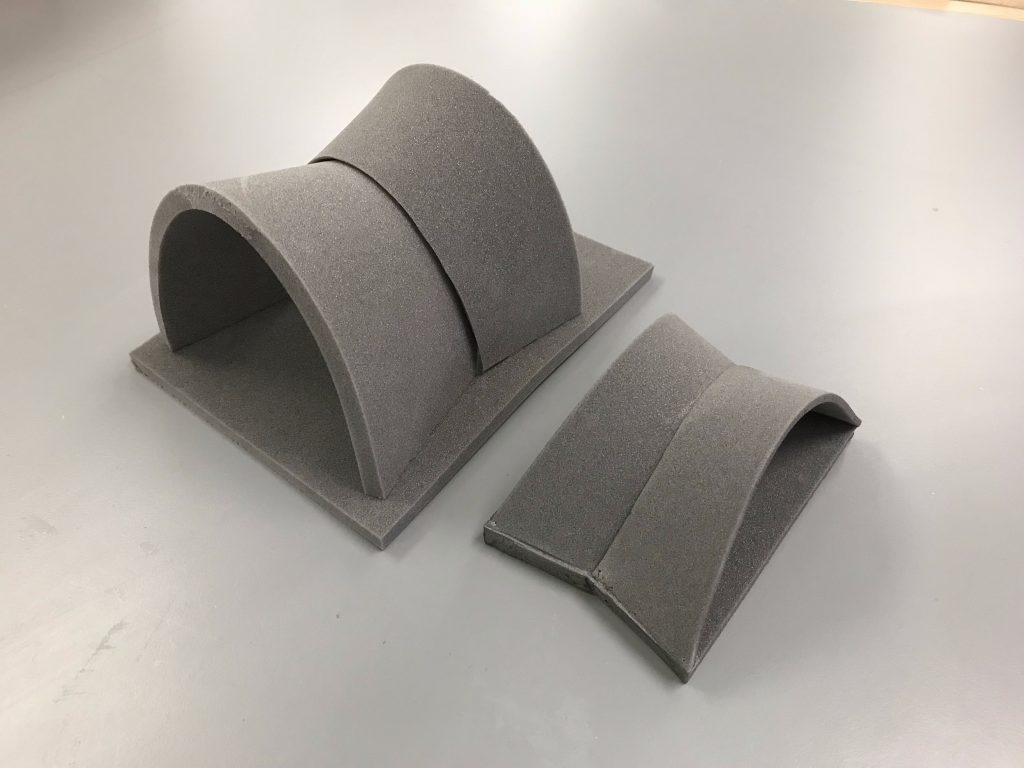 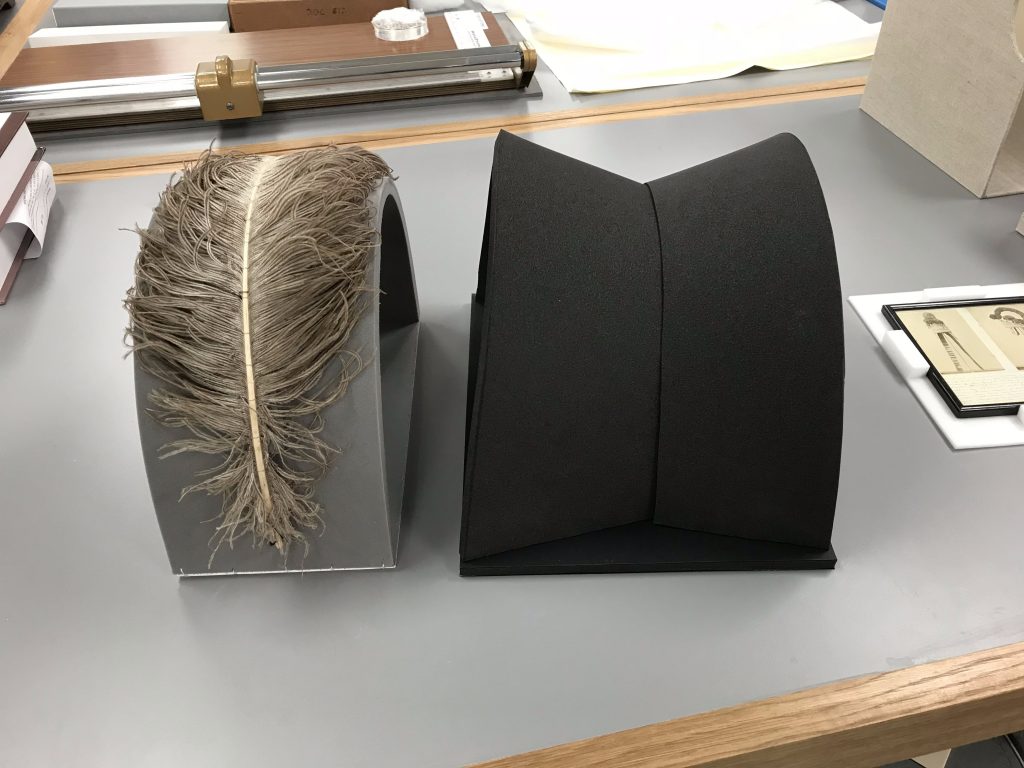 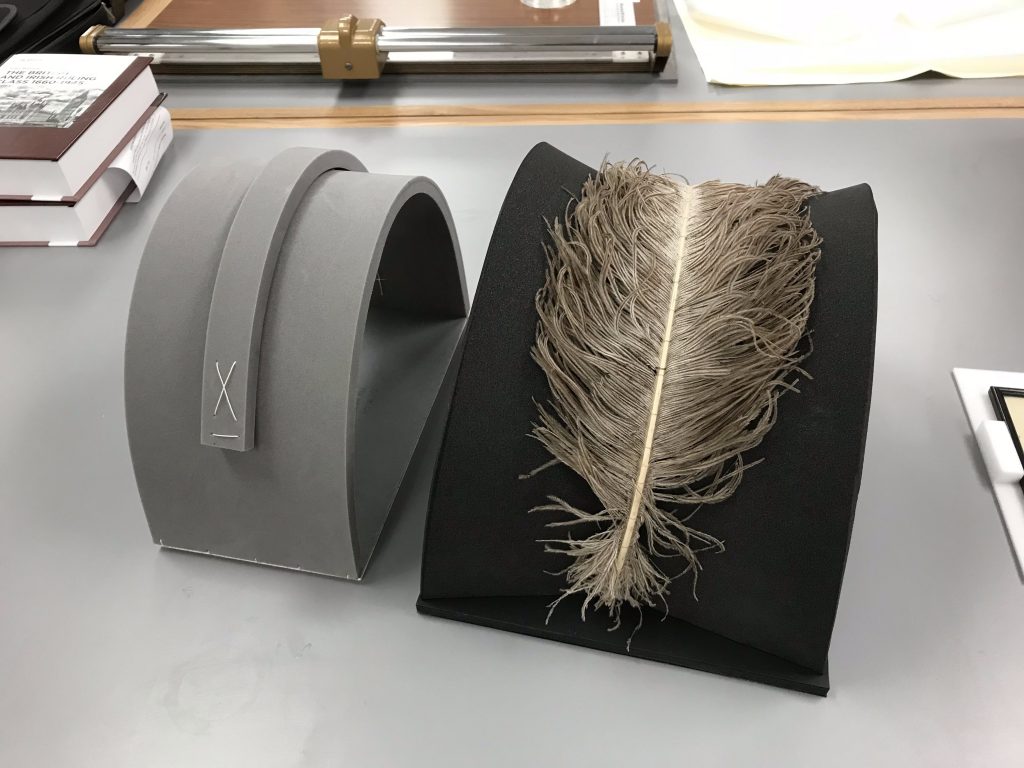 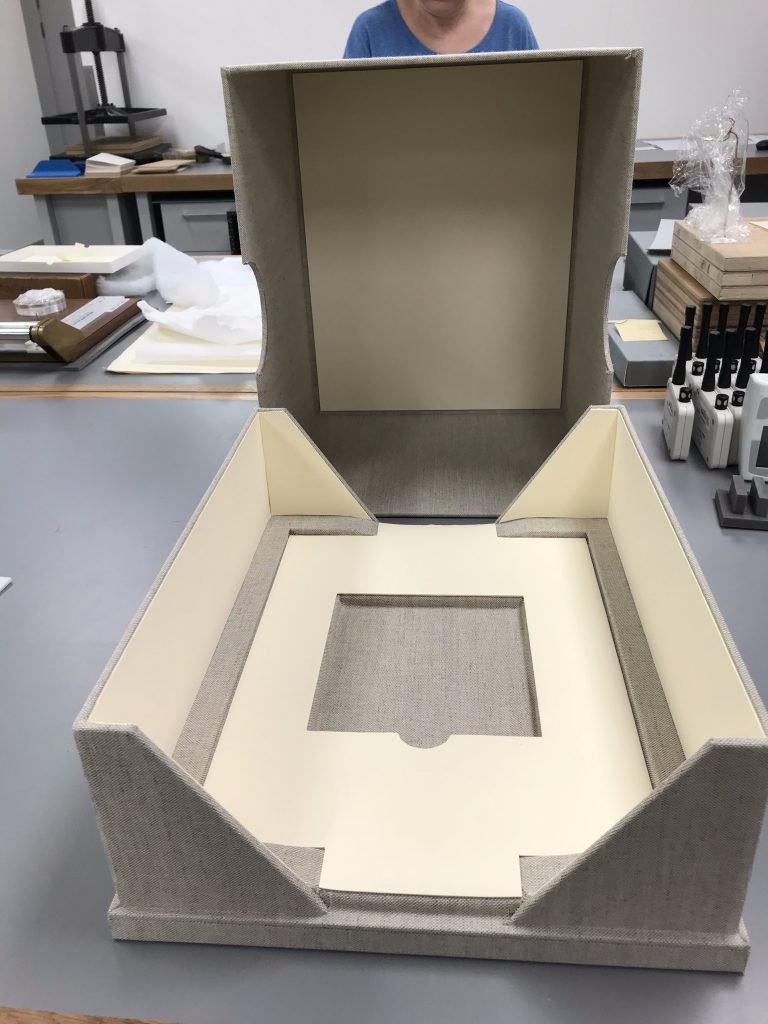 Nested cutout for the photograph 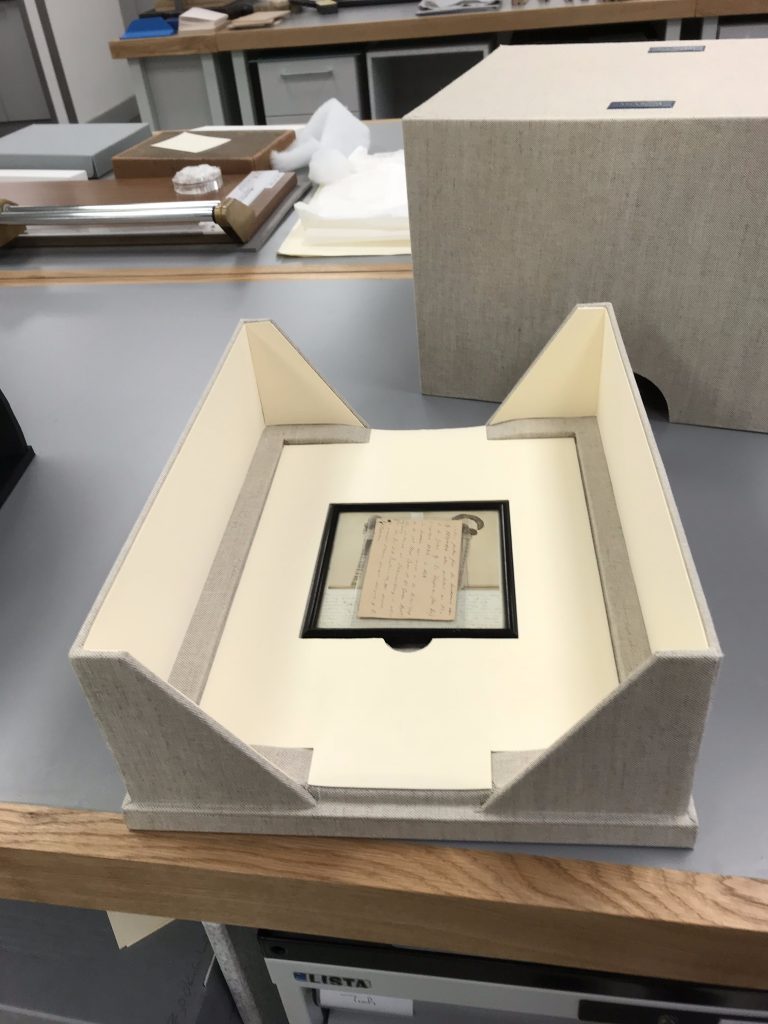 Photograph and encapsulated written description in the base 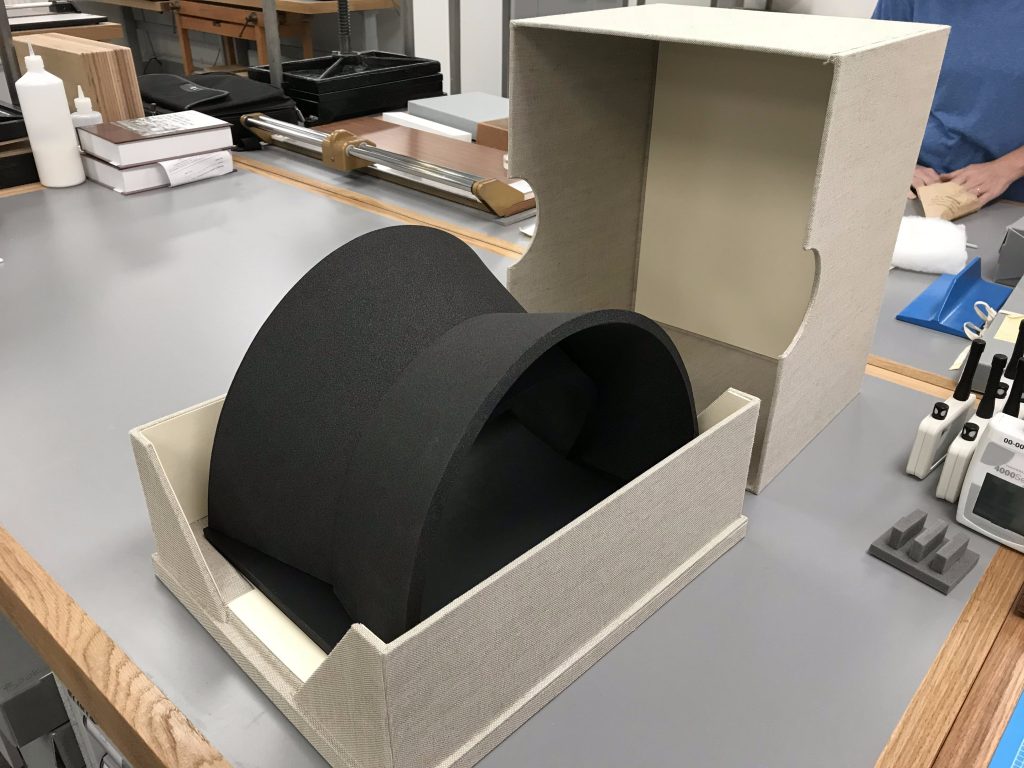 Feather support in the box 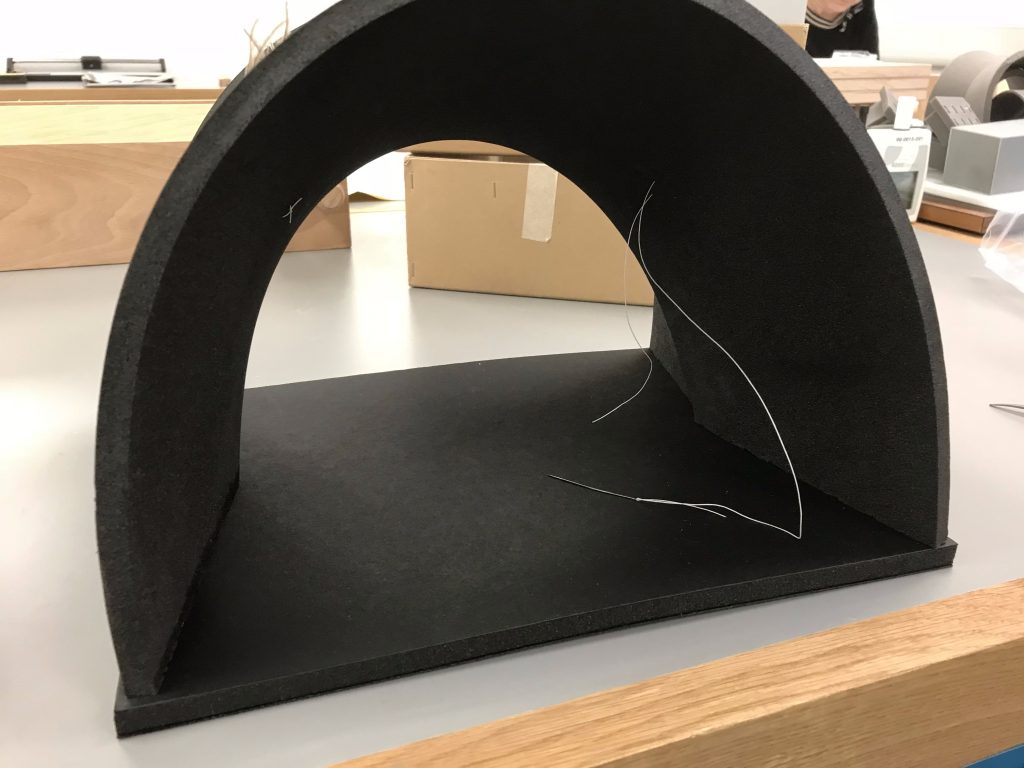 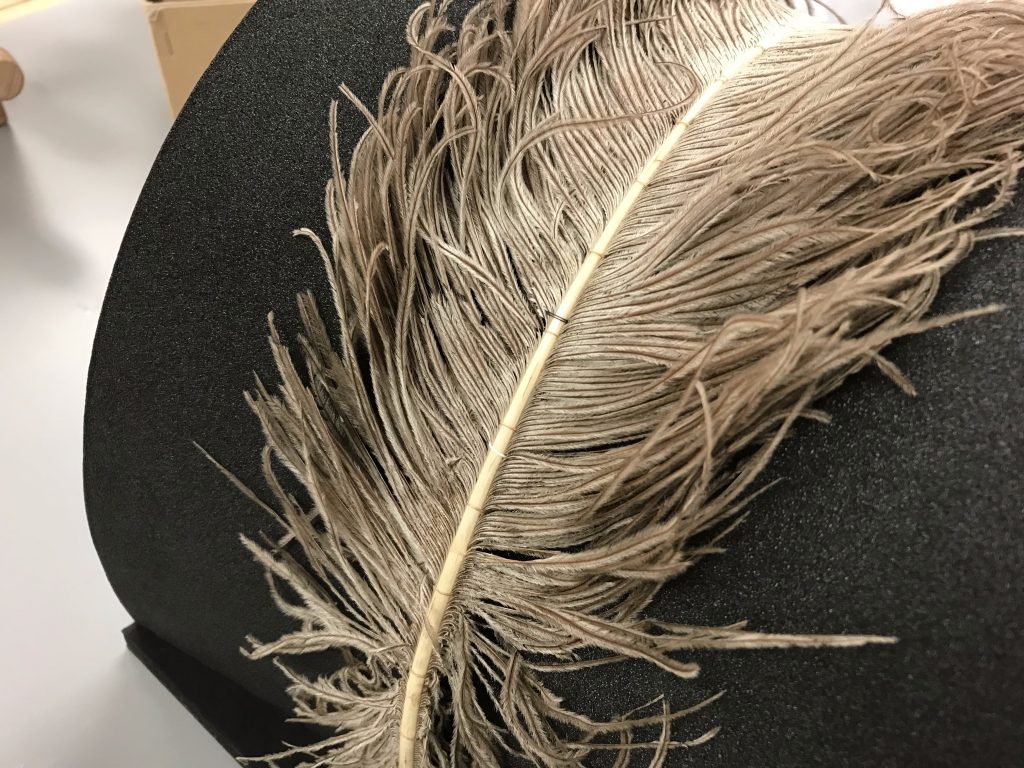 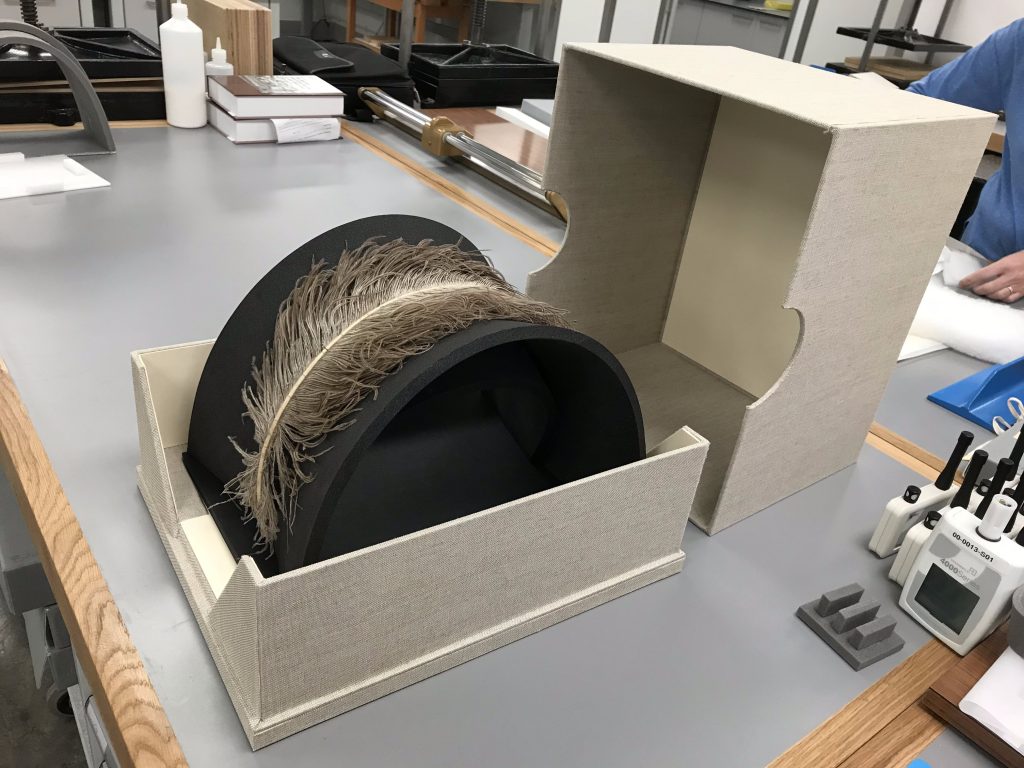 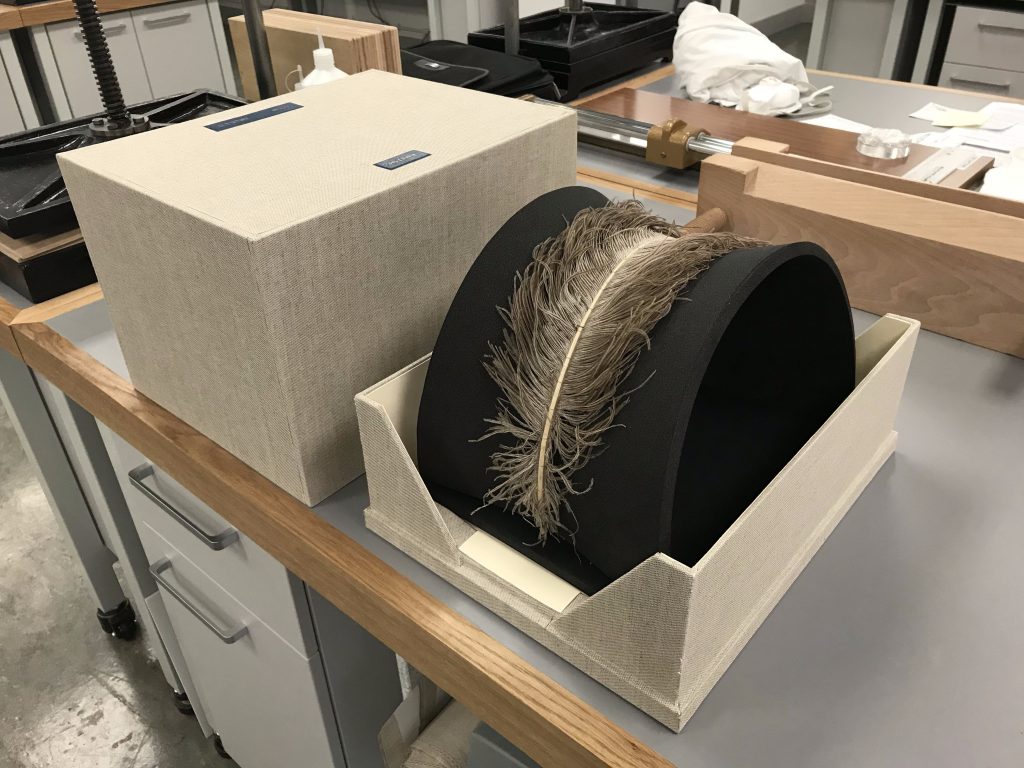 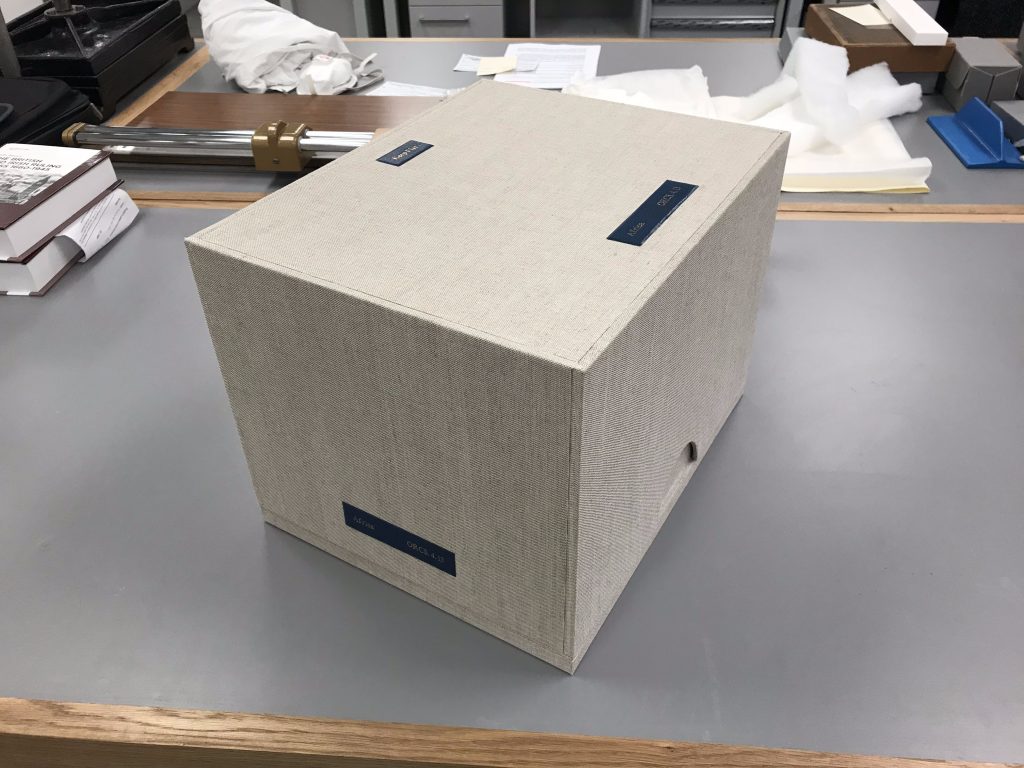