“I have just set a Hungarian rabbi at work…

Posted on 8 December 2018 by Catherine Ansorge

…upon our Hebrew manuscripts” said Henry Bradshaw in June 1865. Bradshaw was Head of the manuscript collections in the University Library and was keen to complete a catalogue of the Hebrew holdings. It has been said that there was a centuries-old curse placed on anyone cataloguing this collection and, whether or not this is true, this initiative does have a history of attempts which were left unfinished. Who was the Rabbi referred to here? 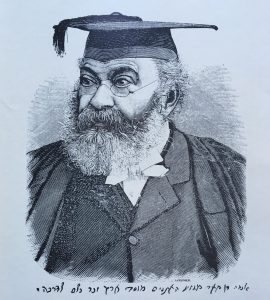 He was Solomon Marcus Schiller-Szinessy, a Hungarian émigré, a man who had already led an eventful life before his arrival in Cambridge. He had been born at Altofen, on the outskirts of Budapest in 1820, the son of a rabbi. As a child he attended a Jewish school but later studied at the Evangelic Lutheran College of Eperjes in Slovakia. He gained a PhD from the University of Jena, and was ordained as a rabbi by the famous reforming rabbi Aron of Arad (Aaron Chorin, 1766-1884). Subsequently he was appointed assistant professor at Eperjes, where he met Lajos Kossuth, the Hungarian nationalist leader of a Magyar uprising against the Austrians. Solomon, with many Jews, became an ardent supporter of the Magyar cause against Austrian oppression, and it was he who executed the order of General Torök to blow up the bridge at Szegedin to halt the enemy’s approach. He was wounded and taken prisoner, but managed to make a miraculous escape the night before his intended execution. He fled overland to Trieste, then escaped by boat to Ireland and subsequently to Manchester in England. Chiefly owing to Professor Theodores, leader of the reform movement in Manchester, Schiller-Szinessy was offered and accepted the office of minister to the newly formed congregation there.

This position he resigned in 1860, deciding to move to Cambridge where he had heard of the possibility of private teaching in Hebrew. Perhaps also he had heard of the manuscript collection in the Library. Here he came to be noticed by Bradshaw who, at his own expense, engaged him to catalogue the Hebrew manuscripts. Recent changes in the University Statutes had also made it possible to admit Jews to official positions, and in 1866-79 he was formally appointed as Teacher of Talmudic and Rabbinic Literature, the first time such a position was officially recognised, although Biblical Hebrew had been taught to Christian clerics in the University since 1540. He was promoted to Reader from 1879-90. In 1877 he received an M.A. (perhaps the first person of the Jewish faith to be awarded the degree) and was admitted as a member of Christ’s College.

The most significant fruit of his labours and his most lasting legacy was his work on the Hebrew manuscripts in Cambridge, both in terms of new acquisitions and in their cataloguing. His original handwritten catalogue, six stout volumes with black leather spines, is still shelved alongside the Library’s Oriental manuscript collections (MS Or.1116-21). The published version, his Catalogue of the Hebrew Manuscripts Preserved in the University Library, Cambridge, appeared in 1876. It described 72 manuscripts of the Hebrew Bible and its commentaries. A second slimmer volume on Talmudic literature was never formally published. He was a slow and meticulous worker, and a large part of his catalogue remains, ironically, still in manuscript, in Or.1116-21. 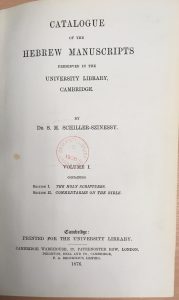 Schiller-Szinessy’s own copy of his Catalogue of the Hebrew manuscripts published in 1876.

But Schiller-Szinessy was also renowned for the Hebrew manuscripts he acquired to add to the Library’s collection. Some of the original Hebrew collection had been present in the Library since its earliest years, the first ones possibly dating back to the original Cambridge Jewish population resident in the city prior to the expulsion of the Jews in 1290.

All of these had been acquired in a fairly random fashion and in small numbers, but it was Schiller-Szinessy who was to change all this. Encouraged by Bradshaw, and using his own skill, vision and European contacts, he acquired large numbers of manuscripts — over 600 texts — from bookdealers in Central Europe. These included Samuel Schönblum of Lemberg and Hirsch Lipschütz of Cracow. In 1868 he purchased from Lipschütz Ha-Maʾor ha-Gadol, a super-commentary on Abraham ibn Ezra’s own commentary on the Pentateuch by Shem Ṭov b. Judah ibn Mayor, a work rich in grammatical notes, and previously unknown biography and bibliography (MS Add.433). 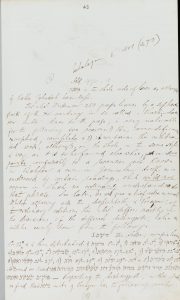 Schiller-Szinessy’s catalogue entry for the Cambridge Mishnah in his original manuscript version. (Ms Or.1120, f. 45r)

Among his acquisitions were some specially treasured items in which Solomon took a close interest, such as the ‘Cambridge Mishnah’ (MS Add.470.1) which had previously belonged to a Bet Midrash in Constantinople. This is one of only three complete manuscripts of the Mishnah, and he considered it to be ‘an outstanding witness of the western type of Mishnaic Hebrew’. Of the manuscript, Schiller-Szinessy writes: ‘Although this copy can lay claim neither to a very great age, nor to absolute correctness, we cannot hesitate to pronounce it to be a MS. beyond all price.’ From Schönblum he purchased an Illuminated Hebrew Bible (containing the Pentateuch and Hagiographa; Add.652), which he described as ‘a model of beauty and correctness’ Also from the same source he purchased a commentary on the Pentateuch by Rashi which he regarded very highly (MS Add.626).

Solomon made some good friends in Cambridge, including Charles Taylor, the Master of St Johns College, an ardent Christian with a strong interest in Rabbinics, also with W. Aldis Wright, Secretary of the Old Testament Revision Committee, and most of all with Henry Bradshaw who became the University Librarian (1867–1886), and who provided him with encouragement, funds and cataloguing expertise. He had religious differences with Solomon Schechter and their relationship was less than cordial. Schiller-Szinessy and his family lived quietly in one of the terraced housed on Hills Road between the end of Station Road and the Hills Road railway bridge. He died at Cambridge March 11 1890 and is buried in a Jewish cemetery in Ipswich. But his work lives on. His complete catalogue, including the formerly unpublished third volume, was republished in 2012. References to his comments were included in the more recent catalogue of the Library’s Hebrew manuscript collection by Professor Stefan Reif, published in 1997. Original descriptions and comments by Schiller-Szinessy appear in many of the descriptions of Hebrew manuscripts in the Cambridge Digital Library.

He was known locally and with affection as ‘The Rabbi’ and one contemporary story recounts that one Friday afternoon he was accidently locked within the precincts of the Senate House and the old Library, but by some unknown means suddenly found himself miraculously transported outside the railings. So here we have a man not only of strong religious convictions and of profound scholarship, but also a magician!