‘A degree of a different character’: 100 years of the Cambridge PhD

On 16 May 1919, a specially established syndicate presented a series of revised regulations governing the admission and courses of study of research students and instituting the new degree of Doctor of Philosophy (PhD).[i] The regulations were approved in May 1920 and the Board of Research Studies (later called the Board of Graduate Studies) was established. The first Cambridge PhD was approved on 17 May 1921. Just four theses were deposited in the University Library in 1921. In the last academic year, 2017/18, close to 1200 were deposited bringing the total number in the 100 years since the establishment of the PhD to over 39,000. 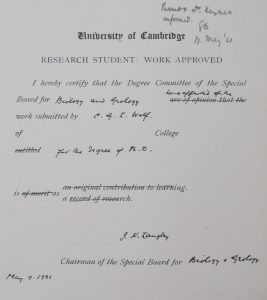 The advent of the PhD degree in Cambridge has a long and perhaps typically convoluted backstory. By the later part of the 19th century, some European and North American universities had begun to offer the equivalent of a PhD degree. The origins of the discussion on the subject of research degrees in Cambridge can be traced back to 1894 when a report was presented to the Council of the Senate, the governing body of the University in this period, in response to proposals at Oxford for the establishment of MSc and MLitt degrees. The subsequent discussions in the Senate, at times fierce and at times seemingly endlessly bogged down in the minutiae of academic red tape, centred on the desirability of attracting students from other higher education institutions, particularly ‘foreign and colonial students’, to Cambridge. The leading advocates for the research degree recognised its potential to attract, in particular, the best young scientists to Cambridge.

Along with the issue of the desirable composition of research students, the discussions also centred on the form such a research degree should take. Prior to the 1919 regulations, research students could proceed to the degree of BA or LLB by examination or by means of certificates of research, usually awarded following a two year period of residence and on production of a piece (or pieces) of written research output. A change in the University statutes allowed graduates of other higher education institutions to pursue this avenue. First among these graduate students, known in this period as advanced students, was the physicist Ernest Rutherford in 1895. The noted mathematician Srinivasa Ramanujan submitted several papers on the subject of highly composite numbers in 1916 under this scheme. About 250 advanced student dissertations are held in the University Library.

Discussions continued, though, on the nature of the research degree. There was particular dissatisfaction with the two-year period of study and general concerns about the standard of the degree. In a discussion of a report presented in 1916 by the General Board of Studies on Degrees for Research, there was eventual consensus that research students should be awarded ‘a degree of different character’ from any which had previously been offered.[ii] The 1919 regulations represent, therefore, the culmination of some 25 years of discussion and debate, the work of a number of syndicates and the production of many reports. 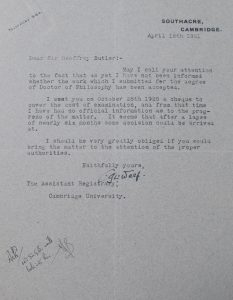 These first set of regulations concerning the PhD are remarkably familiar and in line with our modern understanding of the PhD as a degree awarded on dissertation after at least three years’ independent study. Regulation 13, for instance, spelt out the need to document sources and dealt with the issue of originality, while regulation 17 required a copy of the completed thesis to be deposited in the University Library. It is clear, however, from the graduate files of the earliest individuals who were approved for the PhD degree that the University administration was still uncertain about the standard of the degree and the procedure of its assessment. The Board of Research Studies maintained a file on every graduate student, successful and unsuccessful, typically comprising application papers, progress reports, financial records and examiners’ reports. From correspondence in the file of Charles Wolf, whose thesis ‘The Determination of Lactic Acid’ (University Library classmark: PhD.1) was the first to deposited in the University Library, it is clear that the Board of Research Studies had not yet settled certain fundamental points of procedure.[iii] Wolf was made to wait nearly six months from the point at which he submitted his work before he had any further communication from the Board of Research Studies.

There is also a sense that the early PhD examiners and supervisors were themselves still finding their way. Sir Arthur Quiller-Couch, who supervised the PhD of Julius Herman (‘The development of English drama since Robertson to the present day’, University Library classmark: PhD.2), described the difficulties he had encountered in curbing the enthusiasm of his indefatigable charge. Herman’s thesis was an ambitious attempt to survey the whole of modern English drama. In a comment on the size of Herman’s bibliography, Quiller-Couch observed that he ‘not only devoured libraries but digested them’.[iv] 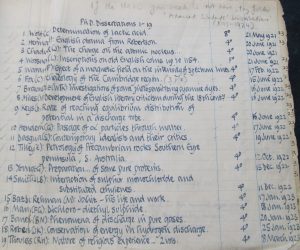 List of the earliest theses deposited in the University Library

Whatever scepticism or lingering doubt there may have been about the new degree, the annual reports of the Board of Research Studies, produced from 1921, document the rapidly growing numbers of PhD students at Cambridge in the 1920s. The annual reports show that the PhD did serve to attract students from other institutions, from America in particular but also from across the colonies, as well as appealing to a growing proportion of Cambridge students. The dominance of science in the early years of the PhD is also apparent. James Chadwick, the nuclear physicist credited with the discovery of the neutron for which he was awarded the Nobel Prize in 1935, was supervised by Ernest Rutherford and gained one of the first PhD degrees in 1921. Among the many notable individuals who submitted a PhD in this early period are the archaeologist Cyril Fred Fox (1923), physicists Peter Kapitza (1923) and Paul Dirac (1926), literary critic F.R. Leavis (1924), biochemist Joseph Needham (1924) and philosopher Ludwig Wittgenstein (1929). Sylva Thurlow was the first woman to submit a science PhD in 1925 (‘Studies on the mechanism of the xanthine oxidase …’, University Library classmark: PhD.93).

The history of the Cambridge PhD, its drawn-out establishment, early years and subsequent evolution into the principle research degree for graduate students, is surely a subject worthy in itself of a PhD. 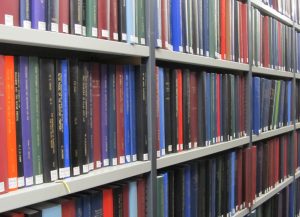