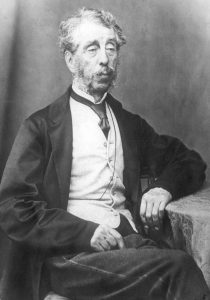 The Royal Commonwealth Society department has published a detailed on-line catalogue for one of its largest and most historically significant art collections, RCMS 40.  It was created by the military engineer Edward Charles Frome (1802-1890).  Frome was born in Gibraltar, the son of a military chaplain, and went to school at Bexley and Blackheath (with the young Benjamin Disraeli) before entering the Woolwich Military Academy in 1817.  Frome’s hobby was drawing and painting, and throughout a long and successful career which involved many postings abroad, he recorded the places he visited by pen and pencil sketches and watercolours.  Some are mere impressions of a scene, captured quickly on the march or in camp, but many are detailed records reflecting the accurate eye and professional skill of the engineer and surveyor, and are of considerable historical value. 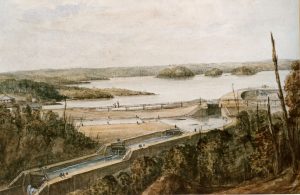 Frome joined the Royal Engineers in 1825, and in 1827 was posted to Canada, working with Lieutenant Colonel John By on the construction of the Rideau Canal, a major engineering project connecting the Ottawa River with the naval arsenal at Kingston.  Its route bypassed the strategically vulnerable St Lawrence River and joined Montreal with the Great Lakes.  Building the canal through approximately 100 miles of swampy wilderness was a mammoth undertaking, requiring the construction of 47 masonry locks and 52 dams.  The settlement By founded on the headlocks to support the canal’s construction, known as Bytown, became the city of Ottawa in 1855, the capital of the province of Canada in 1857, and the capital of the new nation in 1867.  Frome documented the construction of the canal and the city of Kingston, which prospered with the opening of the canal in 1832, in a series of important watercolours and sketches. 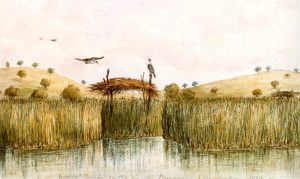 Frome’s next major posting followed in 1840, when he was appointed Surveyor-General of South Australia.  Over the next nine years, with a cadre of professional NCOs and sappers, but supported largely by locally trained personnel, Frome surveyed all of South Australia through the efficient application of triangulation and explored much territory yet unknown to Europeans.  Frome produced more than 100 works during this time, creating an invaluable pictorial record of South Australia’s geography and nascent colony.

Occasionally his watercolours and sketches are captioned with the record of memorable events, such as the destruction of his only bottle of port (image to right), or marital requests, ‘Here sapper [William] Pasmore asked leave to be married – after having got me a good dinner ready – Kangaroo soup and Quail Pie! Of course he got it – and of course is now sorry’ (RCMS 40_7_77).  Pasmore was married on 13 Apr. 1845. While in South Australia, Frome also served on its Executive Council and oversaw the Department of Public Works. 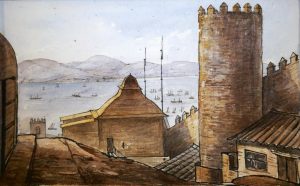 Frome’s later career saw service in Mauritius as Surveyor-General (1852-58); Commanding Royal Engineer in Scotland, Ireland and Gibraltar (1858-68); Inspector-General of Fortifications (1868-69); and Lieutenant-Governor of Guernsey (1869-74).  All of these places are represented in the collection, including many views of Mauritius’s landscape and early colonial architecture.  There is also an exhaustive series of watercolours depicting Gibraltar and its defences, often from unusual vantage points, and some beautiful works from the Channel Islands and Frome’s travel in Europe.

The Frome collection had a complicated provenance before its arrival in Cambridge.  In 1970 the RCS sold all of Frome’s Australian material to the Art Gallery of South Australia and in 1975 Queens University, Kingston, Ontario, purchased some of the Canadian items.  Photographic reproductions of all of these works were made before the sales, however, and they may be viewed with the rest of the Frome collection at the University Library.  A selection of Frome’s watercolours and sketches of Mauritius, Tangiers, Gibraltar and Canada have been digitised and may be viewed on Cambridge Digital Library.  Please follow this link to view the full description of the collection, RCMS 40.