Before Endeavour: Joseph Banks and his travels in England and Wales

Posted on 22 February 2019 by Special Collections 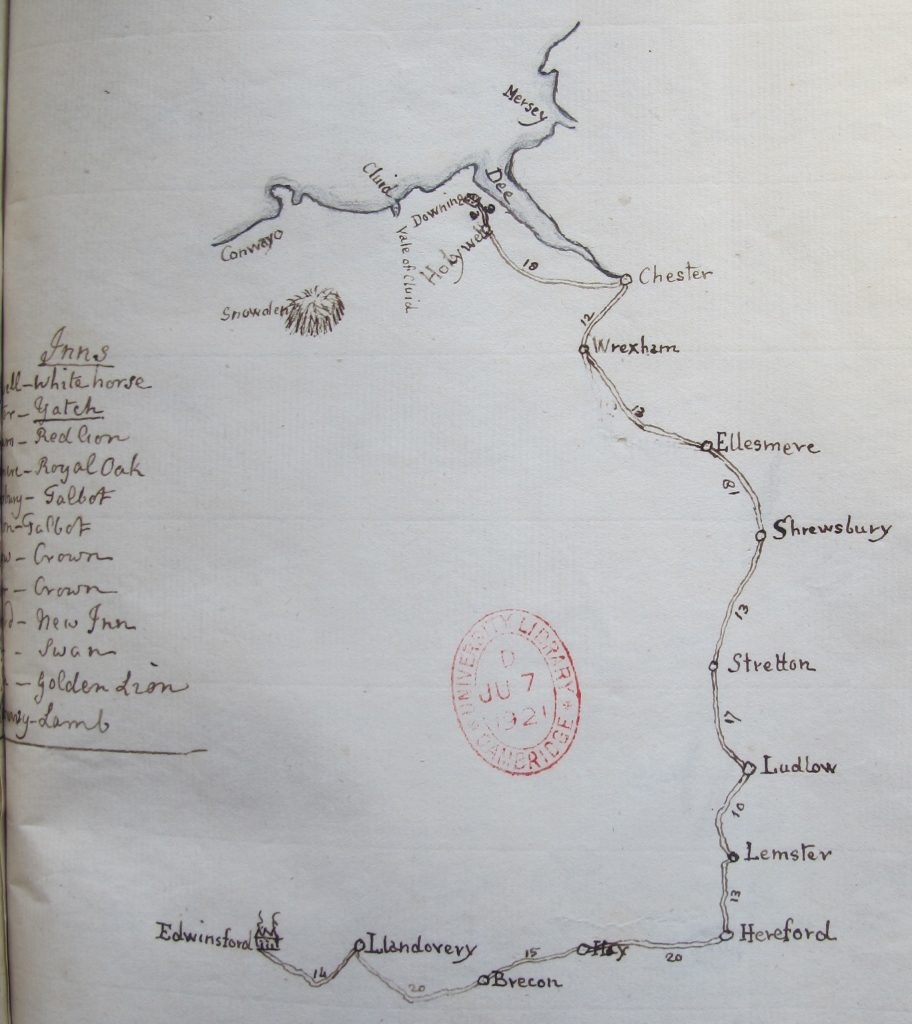 A guest post by Edwin Rose, PhD student in the Department of the History & Philosophy of Science, working on ‘Managing nature in the age of enlightenment: the practice of natural history in Britain, 1760–1830’.

Joseph Banks (1743–1820), President of the Royal Society from 1778 until his death in 1820, is perhaps best remembered for his participation in Captain James Cook’s first voyage to the Pacific (1768–71), the theme of an exhibition in the main foyer of Cambridge University Library in September 2018, which coincided with the 250th anniversary of this event. However, this global circumnavigation was not the first major journey Banks had undertaken. In 1766, he had travelled to Newfoundland and Labrador, and in 1767 he undertook an extensive journey across Britain, Banks’s manuscript journal for which featured in this exhibition. Cambridge University Library holds two of Banks’s journals which detail journeys he undertook to Eastbury and Bristol in May-June 1767 and his Journal of an Excursion to Wales &c. The second of these journeys was the most extensive, lasting nearly six months between early August 1767 and early January 1768. Banks initially set out from his home in London to visit his uncle, Robert Banks-Hodkinson (1721–92) in Edwinsford, Carmarthenshire, before traveling north to Downing Hall, near Holywell, to visit his friend and fellow naturalist Thomas Pennant (1726–98). On the way back, he travelled through the Midlands, witnessing the early stages of the Industrial Revolution.

Many of the observations Banks carried out set the precedent for the practices he used over the course of the Endeavour voyage to the Pacific. One of the main books he took on his journey to Wales was the 1762–63 edition of Carl Linnaeus’ Species Plantarum, which classified plants according to the Linnaean system and ascribed each species a Latin binomial name. One of the main places in which Banks undertook natural historical observations was during his long stay at his uncle’s house in Edwinsford, the findings from which he recorded in a list entitled ‘Catalogue of scarce Plants &c observed in the neighbourhood of Edwinsford august 1767’ (Add. 6294, ff. 6-7; see image at the head of this post). In this list, Banks recorded the Latin binomial for each species he observed, referred it to Linnaeus’ Species Plantarum and adding a brief description of its precise locality in Edwinsford. For example, Banks described the species Lolium temulentum L. (a species of tall grass with purple grain) as being found ‘Among the Barley in the Demesne of Edwinsford’ (Add. 6294, f. 136). However, Banks did not just observe the natural history of Edwinsford. Another major attraction was the antiquarian remains, describing on 19 October 1767 how he was:

Employed in opening a barrow which I had long desired to Examine chiefly on account of its situation on a very high part of Llansaddern mountain visible from a great many places which [led] be to believe it the Burial place of some person of Distinction whose tomb should stand in so Conspicuous a place.

Banks undertook several very precise observations of this barrow, measuring its circumference and height. Over the course of this excavation, Banks discovered a stone chest which contained the remains of what he presumed to be a chieftain of the ancient Britons who had been interred with ‘a most valuable curiosity as it may give some light into the date of these monuments it is an arrowhead of flint’.

Following his stay in Edwinsford, Banks headed back into England, a journey that took several days by horse. His main incentive for this journey was to visit Thomas Pennant at his home at Downing Hall, near Holywell, North Wales. On 21st November 1767, Banks described how ‘This evening arrivd at Downing Mr Pennants house very agreeably situated about a mile from the sea’ (Add. 6294, f. 67). Banks and Pennant shared similar interests in natural history and antiquarianism. Over the course of his stay at Downing, they carried out a number of journeys to observe the wildlife of a nearby salt marsh, collected sea coal from the beach and travelled into the hills to observe several of the ancient ruins, which included a Roman pharos (lighthouse) and several barrows. 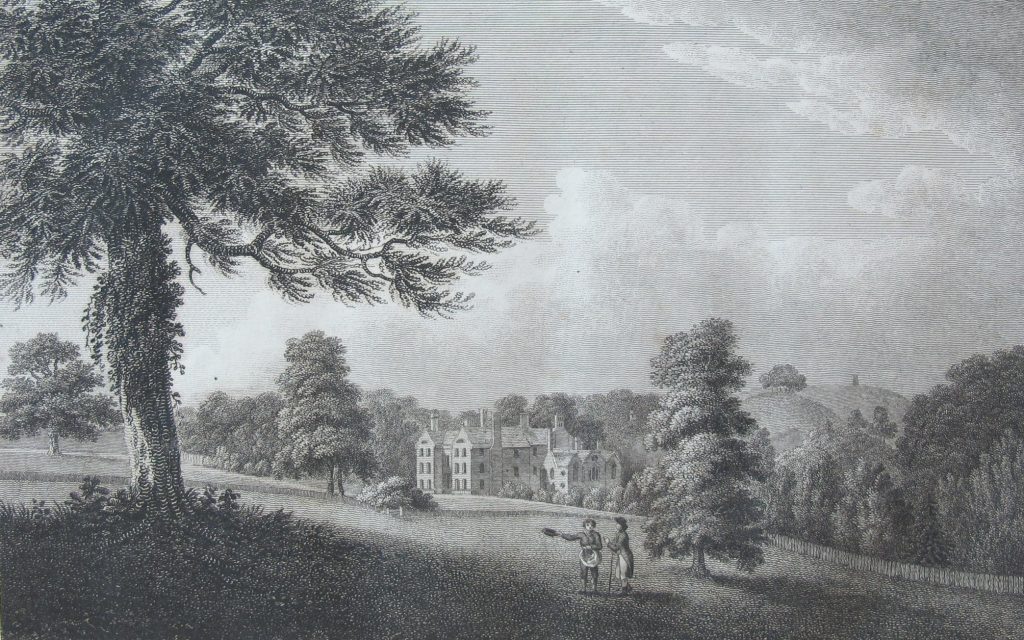 Banks departed from Downing on 4 December 1767 and travelled along the ancient Roman road of Watling Street towards London, via the newly industrialised parts of the Midlands. Industrial innovation and the construction of machines were of particular interest to Banks, and remained so throughout his life. Banks observed the digging of canals, coal mines, pottery works, and some of the first factories that were used to produce cloth, metalwork and porcelain. Alongside this, he observed some of the earliest commercial steam engines, used for pumping water out of mines in and powering looms in Cheadle along with the furnaces used for casting pig iron in Coalbrookdale. Amongst the most notable of these was the Soho manufactory near Birmingham which had opened in 1766. This is often described as the first factory of its kind, owned by Matthew Boulton (1728–1809). Banks described the Soho Manufactory on 21 December 1767 (Add. 6294, f. 7):

Went this morn to a place called Soho about two miles from the town [Birmingham] where Mr Boulton to whom I had a letter lived & carried on his manufacture which he does in a very Large building the architecture of which is agreable good.

Following this, Banks went out into the coal fields, taking careful records of the strata and new steam engines used for pumping water out of the mines, allowing the pits to be dug deeper than ever before. 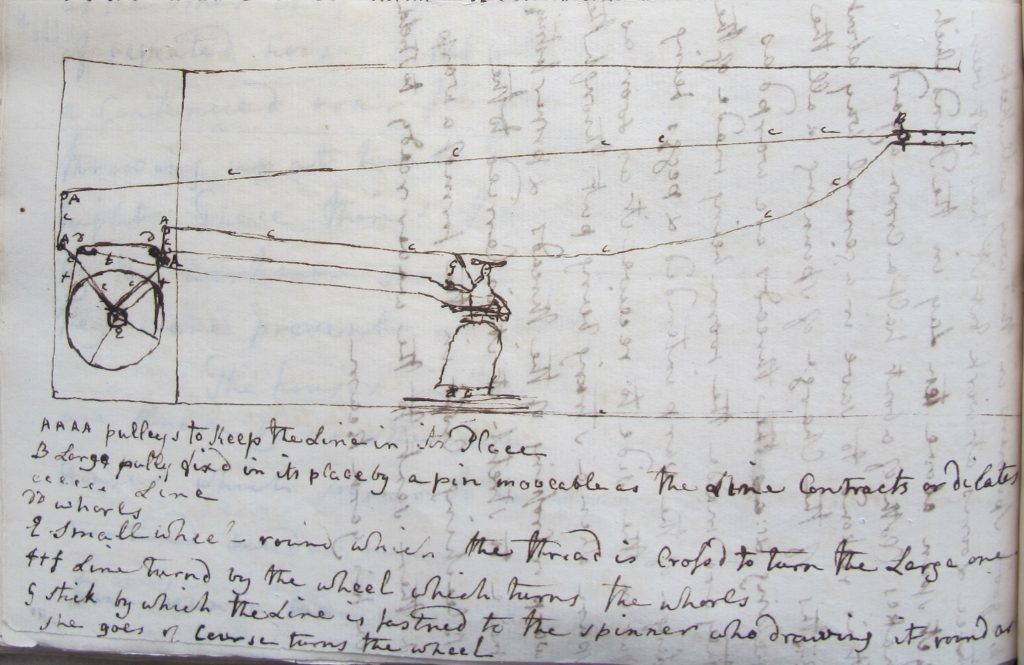 Banks undertook his journey across Britain at a time of major change in British society, sciences and industry. These developments inspired the Royal Society and Admiralty to charter the ship Endeavour in 1768 to observe the transit of Venus from Tahiti. Banks was permitted to accompany the voyage to undertake observations on the natural history of the regions visited. However, the practices used for recording new species used by Banks and Daniel Solander (1733–68) when on board the Endeavour held their origins in Banks’s travels across Britain. Over the course of his journey to Wales, Banks witnessed the earliest stages of the Industrial Revolution, meeting some of the most notable individuals of the industrial age such as Matthew Boulton and Abraham Darby III (1750–89). Banks’s connections with natural historians such as Pennant and the new industrial elite of the Midlands became highly valuable when he sought election to the presidency of the Royal Society in 1778. The interests expressed by Banks throughout his Journal of an Excursion to Wales &c. in natural history, antiquarianism and industrial machines remained prominent thought his life, allowing him to shape British science and wider government to conform to and promote these ideals. 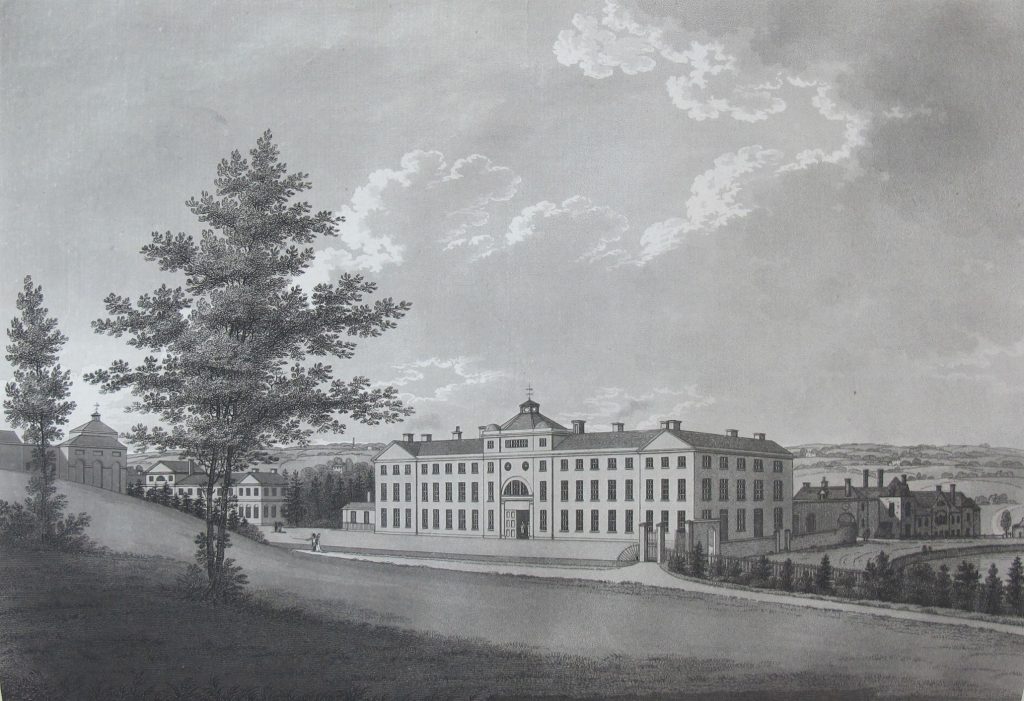