‘The World Is Not Enough’: Devotional Manuscripts of the Bond Family in Cambridge University Library

Posted on 5 March 2019 by Special Collections

Here’s a guest post by Dr Francis Young about a recent acquisition by the UL: 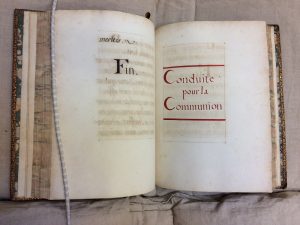 22 February 2019 Cambridge University Library received the generous donation of a manuscript that reveals the cosmopolitan world of seventeenth-century English Catholics. The manuscript, which consists of two devotional treatises in French entitled ‘Conduite pour la Confession’ (‘Conduct for Confession’) and ‘Conduite pour la Communion’ (‘Conduct for Communion’), was transcribed by Sir Thomas Bond, 3rd Baronet (1709–34) for his French mother Marie Peliot (d. 1696) and is one of a pair of manuscripts from the library of Hengrave Hall which have been separated since 1952.

The Bond family of Peckham, Surrey (whose motto, Orbis non sufficit, ‘The world is not enough’, was later borrowed for the fictional spy James Bond by the 007 film franchise) were Royalist and Catholic exiles who rose to prominence during the 1650s at the court of the Queen Dowager of England, Charles I’s widow Henrietta Maria, at Saint-Germain-en-Laye, just outside Paris. Queen Henrietta Maria’s court was a magnet for Catholic Royalist exiles during the Interregnum, and Sir Thomas Bond, 1st Baronet (d. 1685) became Comptroller of the Household to Henrietta Maria (allegedly on payment of an enormous bribe to Henry Jermyn, Earl of St Albans). In October 1658 the exiled Charles II made Thomas a baronet in recognition of his services to the Stuart royal family. On his return to England after the Restoration, Thomas acquired the land in London on which Bond Street would later be built.

In Paris, Sir Thomas Bond married the daughter of the Sieur de la Garde, Marie Peliot, who was a maid of honour to the queen dowager. The couple had three sons: Sir Henry Bond, 2nd Baronet (d. 1721), Sir Thomas Bond, 3rd Baronet (1709–1734) and William Bond (d. 1696), and one daughter, Mary Charlotte Bond (d. 1708). It was via William, the youngest son, that the Bond family’s manuscripts would end up in Cambridge University Library. In 1675, at a double wedding at Hengrave Hall in Suffolk attended by the king’s brother James, Duke of York, William Bond married Mary Gage (d. 1719), a daughter of Sir Edward Gage, 1st Baronet of Hengrave while William Gage, Sir Edward’s son and heir, married Mary Charlotte Bond. This double marriage permanently intertwined two families who had much in common: both were Roman Catholic, both were strongly Royalist, both had strong Continental connections, and both had received favour from Charles II. Following the marriage of William and Mary, the Bonds settled in Bury St Edmunds, a decision which may have owed something to the fact that James, Duke of York was then living at nearby Culford Hall.

It was as a result of the connection with the Gage family that, after the extinction of the Bond baronets in 1767, some of the Bond family’s manuscripts passed into the possession of the Gages and into the library of Hengrave Hall. A large number of the manuscripts from Hengrave Hall were loaned to Cambridge University Library in 1952 (and purchased by the library in 2006). The Hengrave Manuscripts relate primarily to the Kytson, Gage and Rookwood families, but manuscripts associated with the Bond family in the collection include the fascinating diary of a Benedictine monk, Alexius Jones, who was the Bond family’s chaplain in Bury St Edmunds in the 1730s (CUL MS Hengrave 69). However, the most visually striking Bond family manuscript in the collection is MS Hengrave 57, entitled ‘Testament de l’âme chrestienne’ (‘Testament of a Christian Soul’) and hand copied by Sir Thomas Bond for his French-speaking mother. 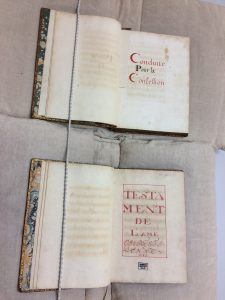 Unfortunately, MS Hengrave 57’s sister manuscript, which appears in library and sale catalogues, did not make its way into the Hengrave Manuscripts. Its destiny was completely unknown until one of the manuscript’s owners contacted me in January 2019. I immediately recognised the manuscript as the lost companion of MS Hengrave 57. The manuscript containing the two devotional treatises on confession and communion was purchased by the father of the present donors at a sale of the contents of Hengrave Hall in 1952, following the death of the house’s owner Sir John Wood. An inscription inside the front cover of the manuscript by Judith Bond, a daughter of Sir Thomas Bond, records that her father copied the manuscript in 1682 for the use of his mother. Judith in turn gave the manuscript to her nephew Charles Jermyn Bond ‘that he be obliged to keep it, in memory of his grandfather, who writ it’. An almost identical inscription appears inside MS Hengrave 57. The binding of the two manuscripts, which probably dates from the early nineteenth century, is also identical, although the newly acquired manuscript is slightly larger than MS Hengrave 57.

It is wonderful that two sister manuscripts have been reunited, and that another lost item from the Hengrave Manuscripts has been brought back into the collection; the last manuscript to be so reunited was MS Additional 10079, a fifteenth-century book of ho 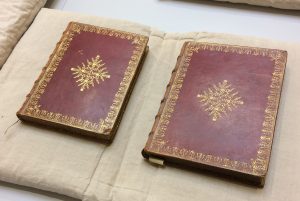 urs once in the library of Hengrave Hall that the University Library acquired at auction in 2014. The two beautifully written and bound manuscripts that have now been brought back together, written in French by an Englishman, are a reminder of a culturally cosmopolitan seventeenth-century English Catholic community that was as much at home at French royal courts as in London or provincial English towns. Indeed, the Bonds might be described as an Anglo-French family, since their tradition of service to French courts continued even after Queen Henrietta Maria’s death in 1669. Sir Thomas Bond’s daughter Mary Charlotte Bond became a maid of honour to Charles II’s youngest sister Henrietta Anne, Duchess of Orléans at Saint-Cloud, where she met her future husband William Gage, then a student in Paris.

One important question about the two manuscripts has yet to be answered: which printed French devotional book (or books) did Sir Thomas Bond copy? Further research will be required to determine this. In the meantime, the manuscripts testify to an intense Catholic piety in the Bond family that was apparently heedless of the prevailing anti-Catholicism of late seventeenth-century England – a piety suggested in the family’s famous motto ‘The world is not enough’.