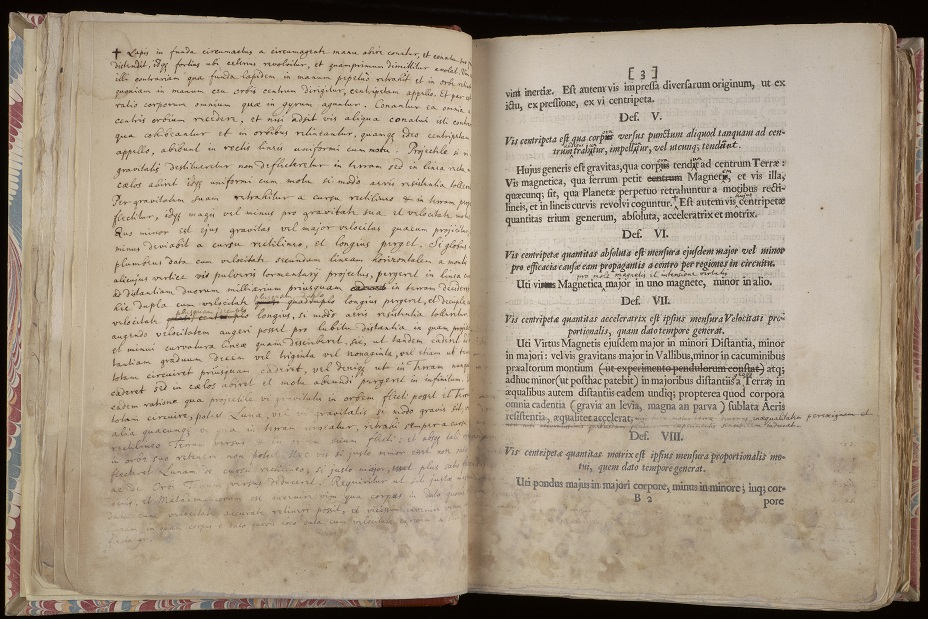 Drawing on some of the themes developed in a new book by Susannah Gibson, The Spirit of Inquiry: How one extraordinary society shaped modern science (OUP, 2019), the exhibition highlights episodes from history of the Society from the earliest times until the present day. 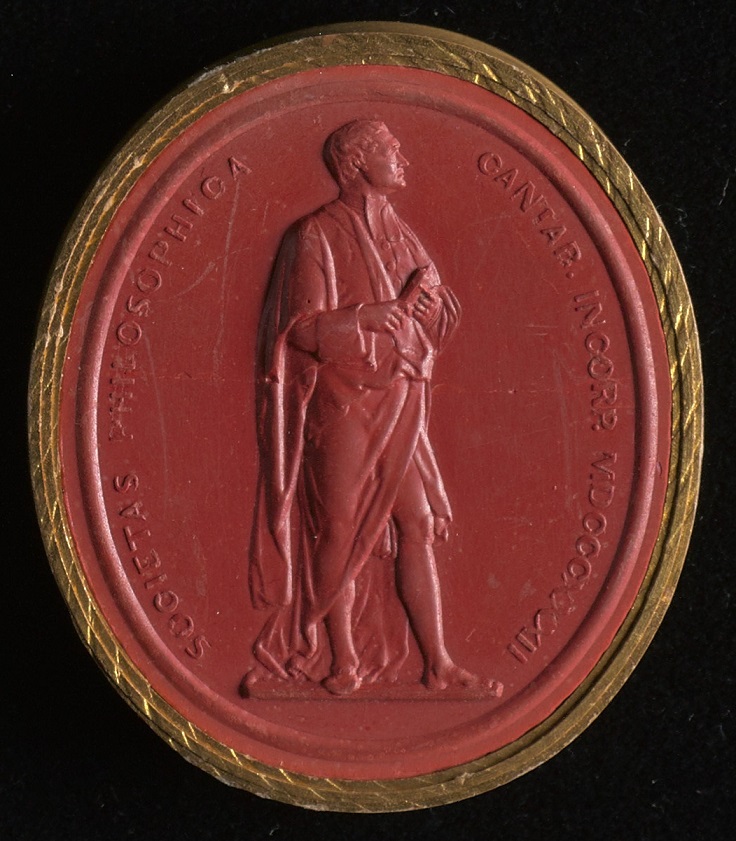 The Society seal, bearing an image of Newton, 1832 (Courtesy of the Cambridge Philosophical Society, CPS 1/3)

We take for granted the diversity of scientific research, laboratories, technical facilities and information available in Cambridge today, but at the beginning of the nineteenth century, Cambridge was a scientific backwater. In the early nineteenth century the Cambridge curriculum was dominated by the Mathematical Tripos. Examination candidates were ‘coached’, ‘wranglers’ (the highest placed candidates) were celebrated; the senior (first-placed) wrangler carried triumphantly through the streets of Cambridge. This tradition emphasised a Newtonian curriculum based on the mathematical principles developed by Newton in his Philosophiae Naturalis Principia Mathematica (1687). Newton’s own annotated copy of the first edition of the Principia is on display in the exhibition. His image was used on the Society’s seal in 1832, invoking tradition as well as invention. Newton’s work was interpreted for Cambridge students through texts such as an English translation of Dutch mathematician S’Gravesande’s Mathematical Elements of Natural Philosophy, which laid the foundation for teaching Newtonian mechanics through experimental demonstrations.

Professorships in scientific subjects were inaugurated throughout the eighteenth century. Some of these such as the Lecturer in Chemistry, William Farish provided experimental demonstrations as part of their course (For example, see A plan of a course of lectures on Arts and Manufactures, more particularly such as relate to Chemistry CUL UA O.XIV). Professors were responsible for purchasing their own equipment and student attendance was voluntary. There was no institutional support for experiment in the university. In addition, the mathematical techniques exemplified in Newtonian ‘fluxions’ (a method of calculus) were considered outdated compared to those employed in Europe. Mathematician Charles Babbage, a founding member of the  CPS, campaigned through the Analytical Society to modernise the Cambridge curriculum, through instruction in French mathematical methods (Memoirs of the Analytical Society, Cambridge 1813, Hh.12.88;) as well as to reform the national organisation of science (Reflections on the decline of science in England, and on some of its causes, London: 1830, M.24.2). Not for the first time, or the last, Cambridge looked to other places, from the continent to the capitals Edinburgh in the north and London in the south for how modern mathematical, experimental and field science might be conducted. The idea of the CPS was conceived on a field trip (to the Isle of Wight) by Adam Sedgwick, professor of geology and Henslow, professor of botany. They needed somewhere to deposit the geological samples collected, information gathered and maps drawn and to discuss their findings. In other words, they needed a museum, a library and a meeting room. 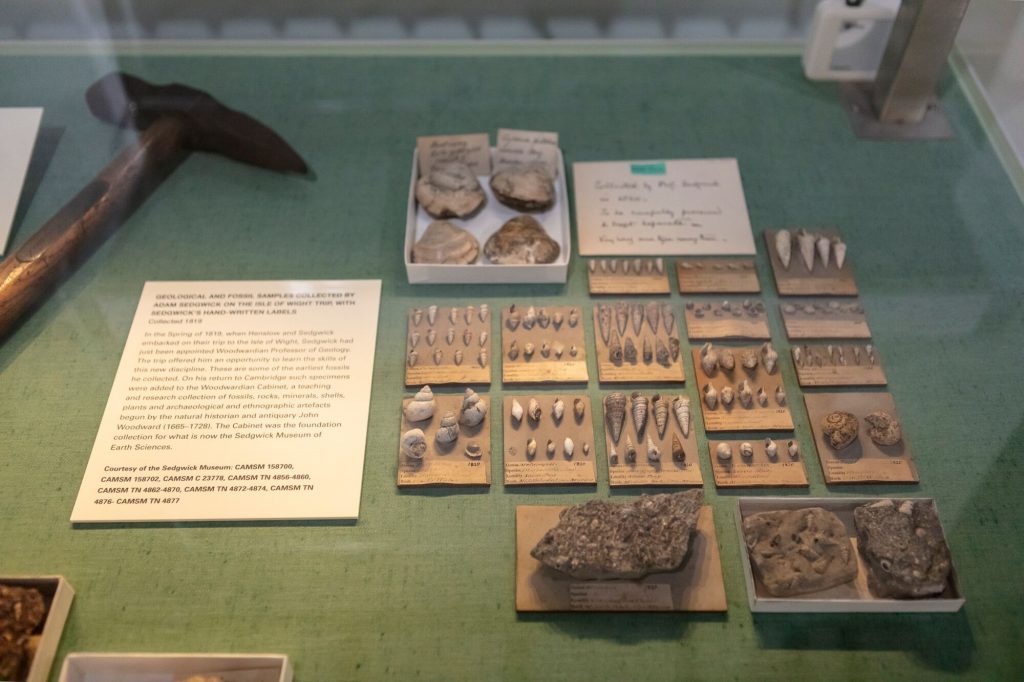 Geological and fossil samples collected by Adam Sedgwick on the Isle of Wight trip, with Sedgwick’s hand-written labels [collected 1819]. Courtesy of the Sedgwick Museum

An image of the CPS lecture room showing museum specimens and debating gentlemen from the London Illustrated News of 1845 is displayed on the exhibition wall. However, their first meeting was held in what was then the University Library, now the Old Schools (The first entry in the Cambridge Philosophical Society’s first Minute Book, announcing the creation of the Society 30 October, 1819 Cambridge Philosophical Society, CPS 3/1). The CPS library, acquired by purchase of the latest works as well as international journal exchanges, is the basis of the university’s scientific library collections today.

The CPS was a lively focus for discussion of the latest findings by far-flung scientists. Charles Darwin complained in a letter from South America to his sister Catherine that extracts of his letters to Henslow penned on the Beagle expedition were read at a meeting of the CPS then published by the CPS without his permission (Charles Darwin to Catherine Darwin, 3 June, 1836 CUL DAR 223: 35). Similarly, the fellows obtained news from astronomer at the Cape Colony John Herschel via Trinity College fellow, later Master William Whewell (who coined the word ‘scientist’ in 1833) about observations of barometer readings around the equator, which Herschel attributed to trade winds.

Astrophysicist Arthur Eddington reported his findings to a sell-out audience at the CPS from the 1919 Principe expedition off the coast of Africa to observe the ‘bending’ of starlight during a total solar eclipse, providing experimental evidence for Einstein’s theory of relativity. (Arthur Eddington to Albert Einstein, [Cambridge], 1 December, 1919, facsimile reproduction, National Library of Israel). With its meetings, library, museum and publications notably the Proceedings of the Cambridge Philosophical Society where many scientific discoveries were first published, the CPS established itself as a clearinghouse for scientific information. 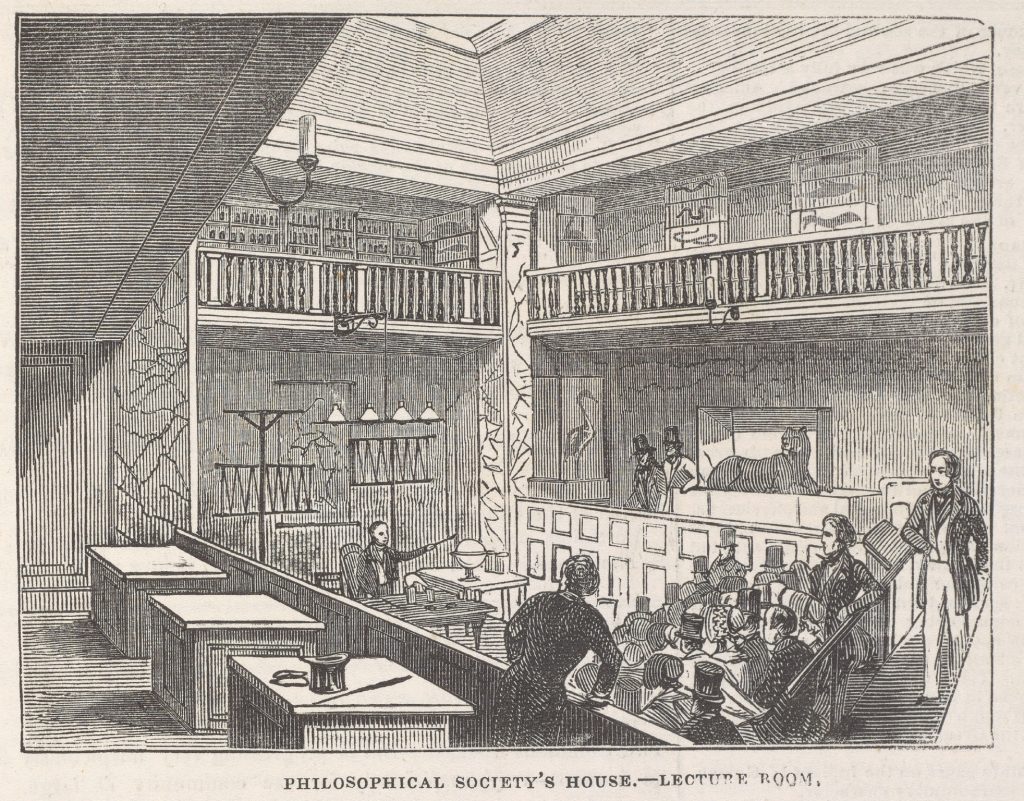 One discovery published in the Proceedings in 1912-14 (William Lawrence Bragg ‘The diffraction of short electromagnetic waves by a crystal’ CUL Q340:1.b.23) was on the refraction of X-rays by a crystal. This was the first articulation of work by William Henry Bragg, a wrangler trained in the Cambridge mathematical tradition, and his son William Lawrence Bragg for which they won the Nobel Prize for physics in 1915. X-rays were often thought to be particles, but their experiments showed the diffraction of X-rays from crystals, arguing they were short electromagnetic waves. It opened up the powerful technique of X-ray crystallography used to explore the structure of materials and molecules. John Kendrew’s 1956 model of the muscle protein myoglobin is shown in the exhibition (Courtesy of the LMB archive, MRC Laboratory of Molecular Biology).

Despite its outdated appearance in the 1820s to critics like Babbage, the curriculum evolved to apply mathematical techniques to new physical problems arising from Britain’s industrial society, for example in heat, electricity and magnetism. Other changes were taking place in the Cambridge curriculum. In 1866, the Natural Sciences Tripos was introduced and in 1872 pioneer of electromagnetic theory, James Clerk Maxwell became the first Cavendish Professor of Experimental Physics with his own university laboratory. Practical classes became part of the curriculum. The second Cavendish Professor John William Strutt, 3rd Baron Rayleigh (Lord Rayleigh), Senior Wrangler, and in 1904 Cambridge’s first Nobel Prize winner (for study of the density of gases and the discovery of Argon) extended this tradition of mathematical physics and experiment. A special feature of this exhibition are the instruments he used including hand-crafted bird whistles and apparatus to detect ultrasonic waves and specimens he studied such as butterfly wings and iridescent beetles in his experiments on light waves. These were carried out in the 1880s in his private laboratory on his estate, Terling, in Essex, which, despite the reforms at Cambridge was better equipped for his research than the Cavendish. Rayleigh’s laboratory is still preserved on the estate by the current Lord Rayleigh, who kindly loaned items to the exhibition.

The Society hosted experiments such as those of the Cambridge Anthropometric Committee. As the CPS membership grew, a programme of human measurement between 1884 and 1904 used instruments designed by the Cambridge Scientific Instrument Company. Measurements were carried out in the CPS Library by the Librarian. Index cards recording measurements and family histories of patrons from the physicist Ernest Rutherford to economist John Maynard Keynes are displayed in the exhibition. 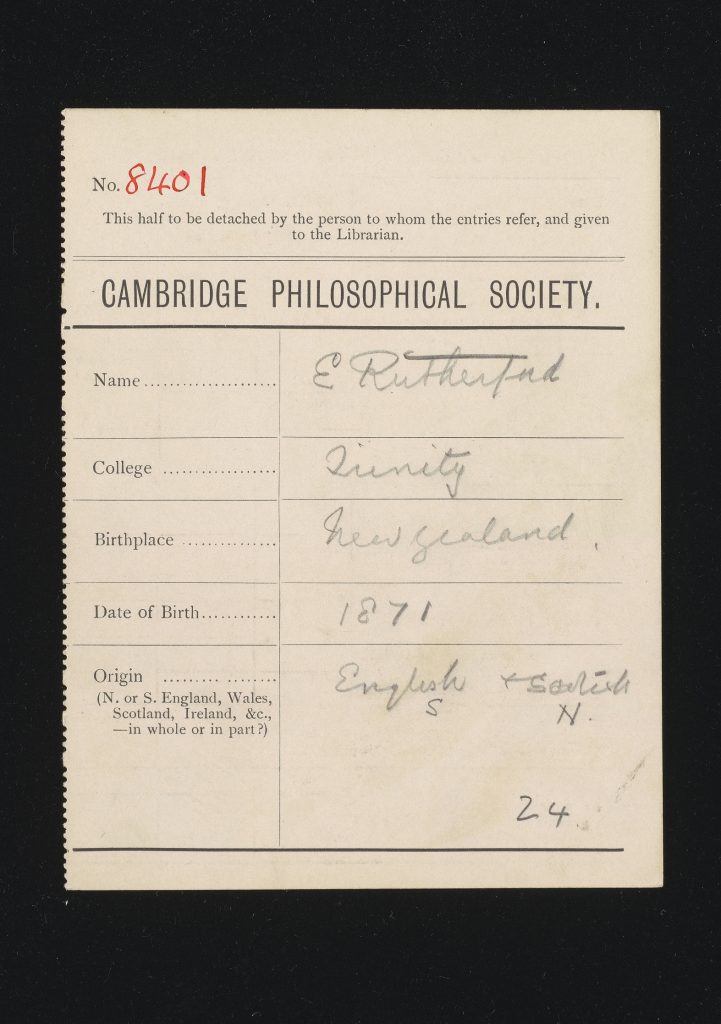 Anthropometric card of physicist Ernest Rutherford who joined the Cavendish Laboratory as an Advanced Research Student in 1895, courtesy of the Cambridge Philosophical Society, CPS 12/1

In all, 11,000 personalised cards were collected. Similar techniques were deployed by Cambridge anthropologist Alfred Cort Haddon in a pioneering anthropological expedition to the Torres Strait in 1898, combined with a wide range of cultural, sociological and psychological studies. With its interest in human measurement, the CPS was again at the forefront of emerging disciplines in this case anthropology. Anthropometry as a significant indicator of human characters was discredited by World War Two, not least due to its association with eugenics inspired by values of racial and class superiority. However, questions of human measurement and difference remain at the forefront of many of the human sciences.

Until 1976 when the CPS library transferred to the University, practically all scientists in Cambridge needed to become members to use the library, in the days before ubiquitous online publication of journal articles. Many of Cambridge’s most famous scientists, like Stephen Hawking who joined the CPS as a research fellow in 1970, were members. In 1979, Hawking became the seventeenth Lucasian Professor of Mathematics and commenced work on explaining modern cosmology to a wide audience. An early typescript draft dated around 1985 of A brief history of time published in 1987 is on display (CUL MS Add. 9222). It sold more than 10 million copies and remained in the Sunday Times best-seller list for 237 weeks.

The CPS did not admit women as fellows until 1929, earlier than the University admitted women to degrees in 1947. Even the well-known and respected mathematician, astronomer and science writer Mary Somerville’s application was declined. Her 1834 work On the Connexion of the Physical Sciences is on display in the exhibition. Attracting, retaining and rewarding women in science, technology, engineering and medicine remains a challenge in Cambridge and globally. One woman member who did make a splash was Jocelyn Bell Burnell, who as PhD student working with radio-astronomer Anthony Hewish discovered pulsars. On display for the first time ever is the pulsar chart reading where Bell Burnell detected the electromagnetic radiation emitted from pulsar ‘CP 1919’ on 6 August 1967, distinguishing it from ‘scruff’ or interference, which commonly affected the low-frequency radio signals of the radio telescope. Further background to this story is provided by a fantastic blog from our Churchill Archives colleagues, including details of how Bell Burnell rolled out the charts on the long floor of the attic in the old Cavendish Laboratory where she used to work. 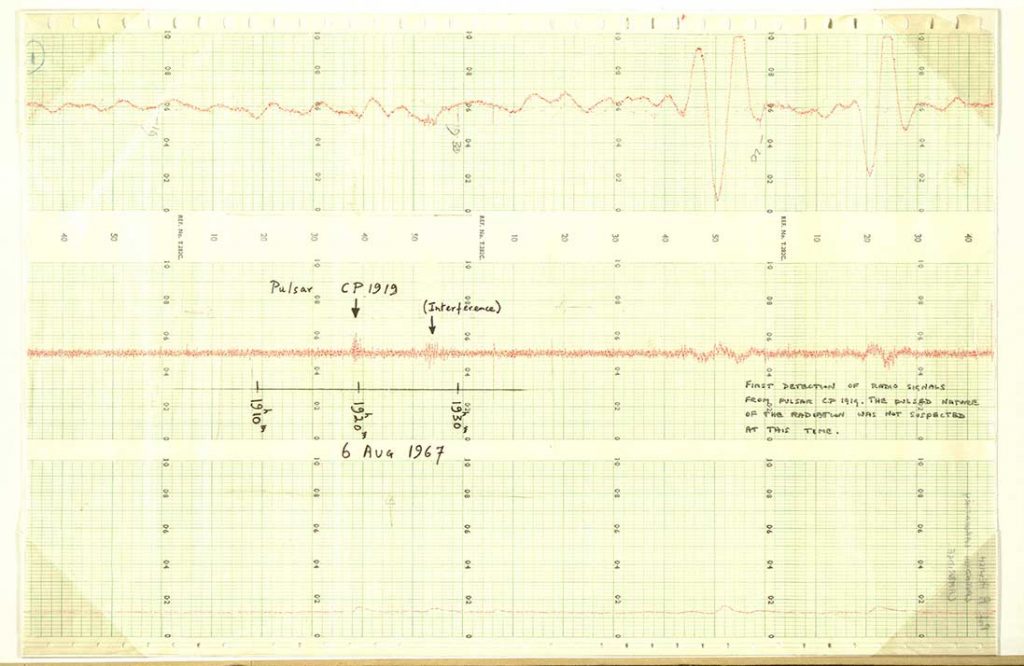 Few scientists working in Cambridge today would be aware of the heritage of the CPS in developing the infrastructure for science that currently exists. This heritage is embodied in the work of the current Henslow Fellows. Alex Liu studies the Ediacaran Period, 635-541 million years ago, documenting the transition of life-forms from pre-Cambrian micro-organisms to the diversity of animal life documented by CPS President Simon Conway-Morris in his account of the Cambrian explosion. Ulrike Bauer studies the biomechanics of plant-insect interaction. Harriet Groom works on how cells protect themselves from viruses and how viruses overcome these barriers to identify therapeutic targets for viruses like HIV-1 and herpes viruses.

This heritage is also preserved in the collections of libraries, archives and museums of Cambridge University and colleges that make up this exhibition and help us answer questions about the world-leading scientific culture we take for granted today.

What will we make of Cambridge science 200 years from now? Unless we document and preserve the activities of scientists today, primarily in digital formats, we will never know. As part of the events supporting the exhibition and Cambridge Science Festival https://www.sciencefestival.cam.ac.uk/events/what-should-i-do-my-archive, a panel of museum, archive, research data and digital preservation experts will be on hand to talk to scientists, administrators and anyone who is interested in documenting and preserving science today. This event is taking place Thursday 14 March, 2.30 pm in Cambridge University Library off the Milstein Room. Book here.