The literary papers of Humphrey Jennings

The Department of Archives and Modern Manuscripts holds two boxes of papers relating to the filmmaker, painter and writer Humphrey Jennings (1907-50), now catalogued as MS Add.10097.

Humphrey Jennings is recognised as one of the finest early documentary filmmakers. His 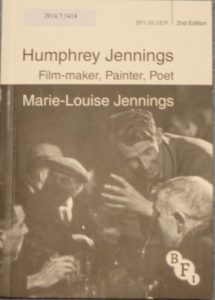 1943 film The silent village, which imagines a successful German invasion of Britain in the context of a South Wales mining village, inspired a sequence in Danny Boyle’s opening ceremony at the 2012 Olympics. Jennings’s best-known films – Listen to Britain (1942), Fires were started (1943) and A diary for Timothy (1945) – were similar wartime productions.

In addition to filmmaking, a profession he fell into almost by chance, Jennings was a man of many interests and talents. As an undergraduate at Cambridge, he designed sets and costumes for Dennis Arundell, including for the first British production of Arthur Honegger’s King David. He was actively involved with the Amateur Dramatic Club, wrote poetry, and was an accomplished linguist. He made collages, took photographs and painted throughout his life – the Tate Gallery now holds some of his best-known surrealist pieces. He was associated with the fledgling surrealist movement in Britain in the late 1930s and was a co-founder of Mass Observation, an anthropological project to document everyday life.

Jennings had studied for the English Tripos at Pembroke College (1926-9). He gained a first class pass in the examinations for both parts of the Tripos, and was awarded a number of prizes and scholarships. Although the English Tripos was still in its infancy at Cambridge, the faculty boasted I. A. Richards, E. M. Forster (who gave the 1927 Clark lectures), Arthur Quiller-Couch, a young F. R. Leavis and Mansfield Forbes among its ranks in Jennings’s undergraduate years. In this milieu and after graduation, Jennings attempted to forge an academic career in Cambridge. He never formally registered as a PhD student at the University but he received financial support through a foundation scholarship from Pembroke College and the Goldsmiths’ Company senior scholarship, as well as the support and encouragement of I. A. Richards, fellow of Magdalene College and eminent literary scholar. 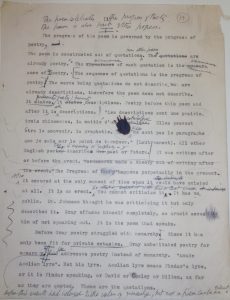 The papers now catalogued as MS Add.10097 relate to this period of Jennings’s career. Dating for the most part to 1929-34, the papers include his principal research on the poet Thomas Gray. There are a number of versions of Jennings’s unpublished essay on ‘The progress of poesy’, all heavily annotated with insertions and deletions, and his accompanying notes. T.S. Eliot expressed an interest in publishing an abridged version of this essay in The Criterion in 1934 but Jennings never took up the offer. 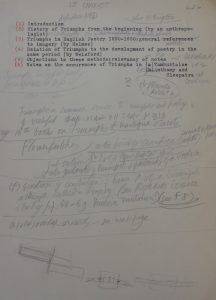 Jennings’s postgraduate research was not confined to Thomas Gray. As was the case throughout his life, Jennings was balancing a number of interests, projects and ideas at the same time. MS Add.10097 includes his notes and draft pieces of writing on plagiarism, imitation and literary borrowings, on Christopher Marlowe’s Tamburlaine, and on Shakespeare’s Venus and Adonis. More broadly, Jennings was interested in the imagery and symbolism of Renaissance literature, and there are notes and an outline for a proposed work titled ‘Le chariot’ on these themes. There is also a small file of extracts gathered for his proposed work ‘Pandaemonium’. Jennings began gathering material for this work, an anthology of texts charting changes to the means of production through the ages, in 1937. The book was published posthumously in 1985. 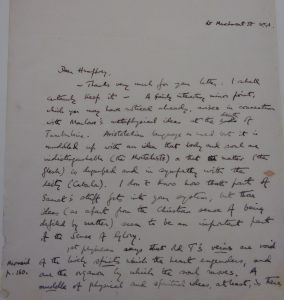 “Thanks very much for your letter: I shall certainly keep it.” Letter of William Empson to Jennings, MS Add.10097/5/1

Other items of particular note in MS Add.10097 include a letter from William Empson, the poet and literary critic, relating to Jennings’s proposed work ‘Le chariot’. Jennings had written to Empson in early 1930 outlining his ‘system’, incorporating his own method of literary criticism, or close reading, with an ambitious theory about processions, triumphs and mythology in Renaissance literature. There is also a copy of a testimonial written by I. A. Richards in 1933, when Jennings was attempting to secure a post as a teacher. Richards summed up Jennings’s research as follows: ‘It shows a very remarkable combination of elaborate erudition with speculative daring. [Jennings] has recently been applying to the poems of Gray a method of conjectural interpretation which is largely his own invention.’

Jennings never succeeded in bringing together the various strands of his research. A critical edition of Venus and Adonis (Cambridge: The Experiment Press, 1930) was the only substantial product of his endeavours in this period. By the end of 1934 he had effectively given up the prospect of an academic career, having secured a post with the General Post Office film unit. Although he occasionally returned to the ideas and themes developed in this period, his energies were taken up in filmmaking, painting, producing radio broadcasts and a range of other pursuits.

MS Add.10097 may be consulted in the Manuscripts Reading Room – a detailed catalogue is available on request. Further papers of Humphrey Jennings are held at Pembroke College Archives and at the British Film Institute Special Collections. 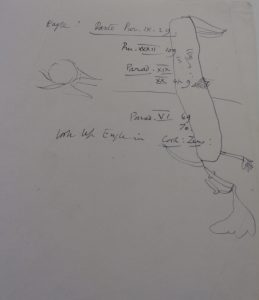