Yes, actually ‘discovered’!  Unlike some purported discoveries of archives (which are actually fully catalogued and have been available to (and consulted by) 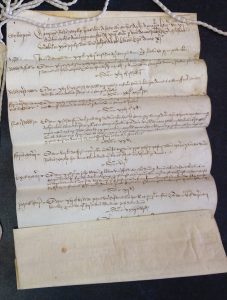 users for years), this little Wilburton manor account roll from c1499 does not appear in any list or catalogue that we are aware of and does not seem to have been heard of since the early 1920s.  Neither is it in the Manorial Documents Register.

It was found by Robert Athol, Jesus College archivist, in a box marked as ‘Misc’ and in an envelope labelled ‘Roll Bishop of Ely from Old Library’.  Robert contacted me because we hold the Ely Diocesan archives at the UL.  There followed an increasingly excited email exchange – and a phone call where squeaks may have been emitted – as we realised that the membrane slotted in beautifully to some of the UL’s existing holdings.  We established that there was no record (that we have been able to find) of the membrane and, once we realised that it could be described as a genuine ‘discovery’, I was keen to find out from Robert whether it was dusty.  Sadly it did not meet this stereotype beloved of some news articles.

y’ removed from Wilburton around 1919 and dispersed via a bookseller in Worthing.  Court records from Wilburton have ended up in a number of places, including the University of Wisconsin and the UL (across several different collections).  The majority of them have been reported to the Manorial Documents Register, as required by law, and are therefore accessible to researchers*.  We think that at some point in the last 100 years somebody connected to Jesus saw a reference to Bishop John Alcock at the top and purchased/obtained the membrane for the College.

Robert very kindly decided that the appropriate place of deposit for the membrane is the UL.  He brought it over and we had the thrill of reuniting it with its siblings, probably for the first time in a century.  The similarities between the membranes are clear and it is wonderful to see them together again.  A little more detective work suggests that the original rolls may have been physically separated and sold individually, possibly to maximise profit.

We are both overjoyed with this discovery and are so happy to reunite the account roll with its friends!  As I always say, you never know when something wonderful may turn up hidden in a box, a cellar, a cupboard or an attic.

*subject to their physical condition