A previously unrecorded sewing technique from the 12th Century.

A new essay, by Jim Bloxam and Shaun Thompson, has been published in Suave Mechanicals: Essays in the History of Bookbinding, Volume 5, entitled: ‘A Previously Unrecorded Sewing Technique Deciphered during a Study of a 12th Century, Limp Tawed-Skin Binding’ 874.b.298(1-5). An examination of the materials and techniques used in the binding of Pembroke MS 119, Alain de Lille, Anticlaudianus are considered in the context of previous publications on limp structures. The authors’ study and conclusion seek to respectfully offer an addition to the existing body of work.

The following is a summary of the essay:

Pembroke MS 119 has an exceptional contemporary binding with interesting structural features, including a limp covering of alum-tawed skin that is stained red. The covering is further edged with a separate piece of unstained alum-tawed skin and was formerly fastened with an alum-tawed wrapping band. The sewn attachment of the text block to the cover is particularly interesting as the authors believe it to be a previously unrecorded technique.

Alain of Lille’s Anticlaudianus, is a long cosmological poem in Latin on theological and philosophical themes. It deals with knowledge and perfection and offers lessons on poetics, grammar, rhetoric, and philosophy. It was a very popular work in the monastic and cathedral schools, and survives in over one hundred manuscripts. Pembroke MS 119, written on parchment, is one of the oldest surviving witnesses of the text, copied not long after the poem was composed. The poem was written ca. 1182–1183, and this manuscript has been dated to the twelfth century. It is not known where the manuscript was written. However, M.R. James attributed it to Bury St Edmunds Abbey.

The binding of Pembroke Ms 119 indicates that it was intended, from its conception, for the private use of a professed monk, possibly in the Abbey of Bury St. Edmunds. Measuring 157mm x 125mm x 24mm, it is light, flexible, functional and portable. The binding is the work of an accomplished craftsman. Great care has been taken in the choice of materials appropriate to their function and durability; these materials have been exploited with great skill, indicating that the work is that of an experienced and highly proficient practitioner.

The fastening method for Pembroke MS 119 has suffered significant loss. However, there are sufficient remains of what was once a wrapping band on the part of the cover, which extends in the form of a rounded flap. The wrapping band would have been the necessary length to wrap around the cover in one or more turns with the end tucked under the winding to enable a secure fastening. Thompson deciphered the sewing/lacing of the wrapping-band attachment.

The authors had initially assumed that the newly deciphered sewing type for MS Pembroke 119 was unique in the family of limp bindings. However, during a study of medieval manuscripts in La Bibliotheque de Clairvaux, Thompson identified a fourteenth-century manuscript, Troyes, Médiathèque du Grand Troyes, 2026, Incerti Summa Sermonum de Dominicis et de Festis, with the same sewing structure as Pembroke MS 119. See: http://bibale.irht.cnrs.fr/17240.  There is the strong possibility that there are more limp bindings of this type as this sewing structure looks sufficiently well developed to suggests that it was an established technique.

Suave Mechanicals is available to purchase from The Legacy Press 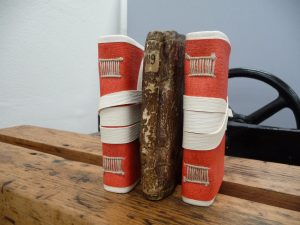 Model bindings standing either side of the original.