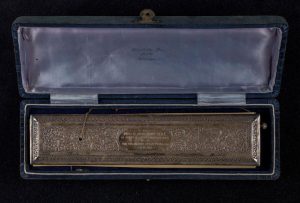 The Royal Commonwealth Society Department is thrilled to announce that it has purchased at auction two items which reinforce its existing strengths in the history of South Asia.  The first acquisition is an address, produced in the form of a traditional palm leaf manuscript, presented to Gladys Croft upon her retirement as Principal of Vincent Girls’ High School, Batticaloa, Sri Lanka, in 1948 (RCMS 402).  Croft had held the position at the school, originally founded by Wesleyan Methodist Missionaries in 1820, since 1922. 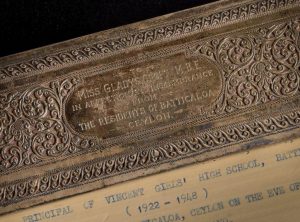 The address was presented at a public garden party and warmly thanks Croft for all she had contributed to the school and the wider community.  It praises her for rare public service, ‘whether we consider its length of well-nigh thirty years, the richness of its quality or the selfless spirit that has actuated it’.  When the new principal had first arrived at the school, it ‘was confined to a narrow curriculum and its standards were low.  It is due to your energy, enterprise and foresight that today the women of Batticaloa whether in academic education or in feminine accomplishments need not fear comparison with their sisters anywhere in Ceylon.’ 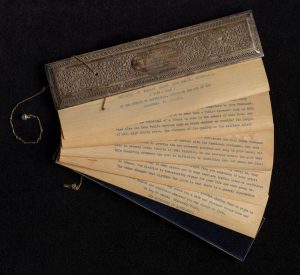 One of Croft’s great achievements was to introduce physical education at a time when ‘it was not considered proper for girls to take part in vigorous games and sports,’ contributing significantly to their physical and mental wellbeing, an example since emulated by all women of the community.  Croft is praised for pioneering the teaching of Domestic Science and introducing the Girl Guide Movement.  The address recognises Croft’s wider social and charitable work, efforts which were amplified by many former pupils inspired to follow her lead.  During the Second World War, Croft also took a leading role in Air Raid Precaution measures and in the Red Cross.  The address concludes by declaring ‘Our District is immeasurably richer for your life and work among us.’

The second item, ‘Souvenir of India,’ is a rare ‘accordion fold’ photograph album containing 12 albumen prints showing domestic scenes, probably dating from the 1870s (Y3022ZZZZ).  It has pencil captions beneath each image (written over fainter pencil captions) but the photographer is unknown. A similarly titled album of the same size and number of prints has been credited to the pioneering French photographer Jean Baptiste Oscar Mallitte (1829-1905).  We would welcome any assistance in identifying the album’s creator.  We are very grateful for the generous support of the Friends of Cambridge University Library, which allowed us to reinforce an existing strength in historic photographs of the Indian subcontinent.