Manuscripts from the Gayer-Anderson brothers 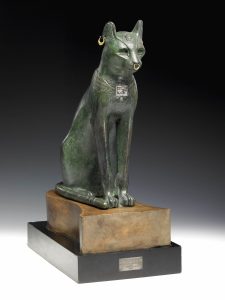 The Gayer-Anderson cat from the British Museum collections

One of the most iconic items in the British Museum’s Egyptology collection is the bronze cat figurine commonly known as the ‘Gayer-Anderson cat’. It is roughly life-sized, with an exquisitely-modelled head, gold rings in its ears and nose and a finely-made collar. This is no ordinary house cat but a depiction of a god – probably the god Bastet – and most likely dates from the 26th dynasty (664-525 BC). A votive cat from a temple at Saqqara near Cairo in Egypt, it was manufactured by the lost-wax technique from copper alloy. A less well-known fact is that there is a connection between its donor and Cambridge University Library’s Islamic manuscript collections. 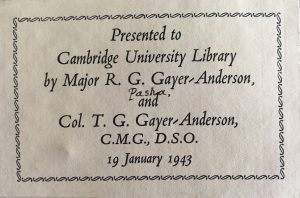 Bookplate found in each of the volumes. Here John has added his title ‘Pasha’

The cat was given to the British Museum in 1947 by Major Robert Gayer-Anderson, (commonly known as John), a long-time resident in Egypt and passionate collector of antiquities. Born in Ireland in 1881, he later he received medical training in London and joined the Royal Army Medical Corps. He served at Gallipoli and in Egypt during WW1, retiring from the army in 1920. But he stayed on in Egypt, a country he had grown to love, becoming Inspector in the Ministry of the Interior for the Egyptian Government and then, until 1924, Oriental Secretary at the Residency in Cairo. He was also lucky to be included in the official opening of ceremony of the Tomb of Tutankhamun discovered in 1923 by Lord Carnarvon and Howard Carter. Residing in Cairo after retirement, as a very skilled and knowledgeable dealer in antiquities he sold many items to museums, including a collection to the Fitzwilliam Museum in Cambridge in 1943. Gayer-Anderson had purchased the bronze cat from a dealer friend in Cairo in 1934 and lovingly cleaned and restored it himself.
But John had an identical twin brother, Thomas, and although they had been close in childhood, their careers had taken a different trajectories. Thomas entered in the Royal Military Academy in Woolwich in 1898. He saw active service in the Boer War in 1900-2 and was seconded to the Egyptian army from 1911-1914, taking part in a punitive expedition in the Sudan in 1913. He served in Europe in WW1 and was promoted Colonel in 1922, followed by three years in Pune, India, on the General Staff before retirement in 1929. Like his brother he was also an experienced collector, also an accomplished painter, completing several portraits of John.

It appears that both brothers also extended their interests to include manuscripts and in January 1943 they donated fifteen items to Cambridge University Library, the name-plate affixed in each volume clearly stating they were donated jointly. 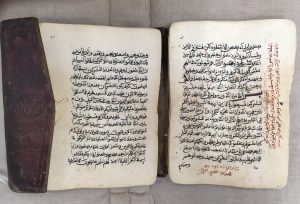 Most of the manuscripts originate from the Islamic tradition, the texts range over both religious and secular subjects. There is no evidence that they were collected with any particular focus in mind but were probably acquired along with Museum items. Four of the manuscripts are in Arabic and include a volume of poetry and prayers dated 1591 AD (Or. 1355), two astronomical works, including a 17th century copy of Lisān al-falak by al-Rimmiyawī al-Maghribī (Or.1359) and al-Durr al-farīd ʻalá al-raṣd al-jadīd by Riḍwān ibn Razzāz, (astronomical tables) dated 1718 AD (Or.1369). There is also a Qur’an written in a West African-style of script on paper leaves housed in a leather cover (Or. 1370). 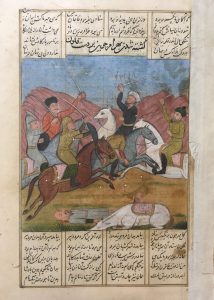 A further four volumes are in Persian, and include two copies of Firdausi’s epic, the Shahnamah. One of these is an incomplete text but includes twelve miniatures in Mogul style and is dated 1565 AD (Or.1356). The other, a later, copy dated 1799 AD, originated in Sialkot; it is liberally illustrated with seventy miniature paintings (Or.1354). There is a copy of the Subḥat al-abrār (Rosary of the righteous) by the Persian poet Jāmī, (Or. 1362) dating from the 16th century and a volume Taʼrīkh al-nādirī (A history of Nadir Shah’s wars) by Mahdī Khān Astarābādī, dated 1785 AD (Or. 1357).
There are three texts in Ottoman Turkish; one a translation from the Arabic of a geographical text (Or. 1358), a beautiful volume of poetry by the Turkish poet Bāqī with the text enclosed in a decorative gold border (Or.1361) and a Qur’anic commentary (Or.1363). Also included is a single volume of official statutes in Malay (Or.1364) and from the Christian tradition here are two volumes of Coptic prayers dating from the 18th century (Or.1365-6). 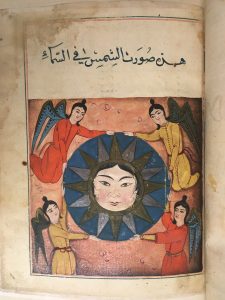 Individual items in the collection have originated from a wide geographical region from Egypt to India, and there is no indication as to which brother had acquired which item, but it is possible to surmise that the Arabic volumes came from John while those from the Indian and Persian traditions were probably collected by Thomas whose exploits took him further East.
In 1935, John purchased a home in Cairo, the Bayt el-Kritliyyah (‘House of the Cretan woman’), a remarkable example of Muslim domestic architecture dating back to the Mamluk Period. On his return to England in 1942, he gifted this, and its contents, to the Egyptian nation as the Gayer-Anderson Museum of Oriental Arts and Crafts and it is for this that King Farouk awarded him the title of Pasha.
In 1924, John had also purchased the Little Hall in Lavenham, Suffolk where he lived in the summer months when it was too hot to live in Egypt. During the years of WW2, it was here that the bronze cat was hidden away for safety’s sake in a well in the garden. After the war ended it was, with Thomas’s help, officially presented to the British Museum. Almost immediately it became one of the best-loved artefacts on display in the Egyptian galleries and is still one of the best-selling replica objects in the Museum shop. John died at his home in Lavenham in 1945; Thomas lived on there until his death in 1959.

Arberry, A.J. A second supplementary hand-list of the Muhammadan manuscripts in the University & Colleges of Cambridge. Cambridge. 1952.

Foxcroft, L. Gayer-Anderson; the life and afterlife of the Irish Pasha. Cairo, 2016.