Tales of India written for my grandchildren

The Royal Commonwealth Society Department recently has been donated a fascinating personal memoir, ‘Tales of India written for my grandchildren’ (RCMS 400).  Its author was Herbert Stewart Ross (1885-1963), who enjoyed a long and varied career in the United Provinces between 1910 and 1945, serving as a District Officer, Collector, District Magistrate, Divisional Commissioner, Member of the Board of Revenue and Director of Land Records. Ross’s reminiscences were written in retirement in 1952 for his four Canadian grandchildren, whom he met only once briefly in 1960.  As the title suggests, the book is anecdotal in nature, largely describing leisure activities or notable incidents. Many of these occurred while travelling and camping in remote places during tours of inspection, including encounters with panthers, tigers, cobras, pythons, crocodiles and wild boar.  There are sections devoted to horses and elephants, which played such a major part in Ross’s life, including an account of a rampaging elephant, which killed two men, pulled down several houses, and pushed over a railway truck.  Ross also discusses his duties as District Officer, Collector and Magistrate, in which ‘almost every phase of human activity was touched upon’ including revenue, agriculture, public health, education, social services, law and order, and the administration of justice.  Unfortunately there is little scope here to discuss the memoir in detail, but two very memorable stories stand out. 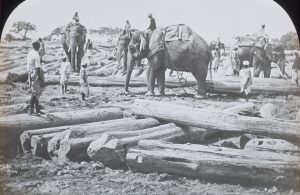 The first is the tale of the horrific murder and decapitation of an indigo planter, which Ross investigated while serving as District Magistrate of Mainpuri in the Agra Division.  The dead man and his brother (another planter) were universally unpopular, possessing evil reputations as oppressive landlords and extortionate moneylenders.  It was also rumoured that their enemies disappeared mysteriously.  The only clue to the crime lay in the fact that the murdered planter’s dog, which slept beside his master’s bed and would have raised the alarm, had died the night before.  The dog’s body was exhumed and tests revealed that it had been poisoned with Datura, a genus of poisonous flowering plants also known as devil’s trumpets.  The sweeper, whose duty was to feed the dog, was arrested, but gave away nothing during questioning.  The police superintendent inspired a confession by a most extraordinary expedient.  He covered his face, arms and bare torso in phosphorous and entered the sweeper’s cell in the dead of night, pretending to be the ghost of the murdered man, and threatened to haunt him for the rest of his life unless he revealed details of the crime.  After a second night’s haunting, the terrified sweeper confessed that a group of twelve men, unable to tolerate the planter’s oppression any longer, had conspired to murder him, and his head had been cut off by a butcher.  The sweeper’s part had been to silence the dog, allowing the killers to surprise their victim in his sleep. 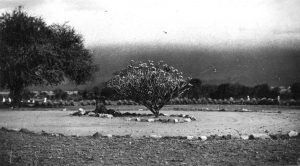 In a second striking episode, Ross narrated his battle against a swarm of locusts which attacked the autumn crops of Moradabad where he was District Magistrate.  Although nothing could be done to save the crops, Ross organised loans for the cultivators who had suffered.  He then noticed that the insects were changing colour from red to a light orange, signalling a further threat, because they were mating.  Mobilising every government department, Ross organised a campaign to prevent damage to the recently sown winter crops by the birth of huge numbers of young locusts, known as hoppers.  Every field where the locusts had mated was marked by a flag, and when the hatching of the eggs was imminent, a trench was dug around and faced with oilcloth.  When the hatching began, villagers descended upon the hoppers (as yet unable to fly) beating them to death with branches and brushwood.  Those hoppers which reached the trenches were unable to climb over the slippery oilcloth, fell back inside and eventually were burned with paraffin.  600 villages were included in the campaign, averting the threat of famine. 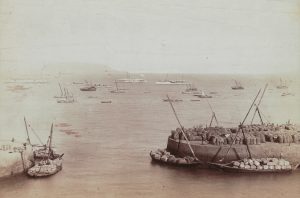 Ross retired in November 1945 on the eve of Indian independence and returned to Britain, concluding his memoir, ‘I left India with many regrets.  It was hard to leave all my friends, both Indian and European.  I rarely spent a dull or idle day, and when the ship steamed from Bombay I remembered all these and felt that if I could have the choice again, I would have chosen that life.  It is sad that no such openings are now available to British youths, but it is very right and proper that it should be so.’