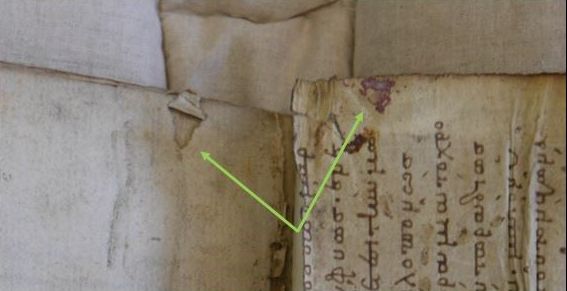 Posted on 12 November 2019 by Special Collections

In a previous #PolonskyGreek project blogpost Conserving fragments, conservators discussed their work on the fragments; this blogpost describes how cataloguers can deal with the challenges of fragments.

One of the biggest challenges for cataloguers is the reconstruction of the origin and provenance of the manuscripts up to their entry into the UL, a challenge that becomes even more difficult in the absence of documents. In such cases, it is down to the manuscripts themselves to provide clues to their history. Cataloguers and conservators gather evidence from script, inscriptions by scribes or previous owners, decoration, construction and organisation and physical details.

Fragments are by their very nature more susceptible to being lost and forgotten. On rare occasions, they are recognisably taken from manuscripts dispersed in different institutions; it is particularly satisfying to be able to reconstruct their presence in a specific codex during its history.

This is the case of the two parchment fragments from a manuscript of hagiographical contents shown above, CUL MS Add. 2753.1a-b. The most immediately conspicuous peculiarity of the fragments are the inscriptions of a name, “J. B. Hautin” and two descriptions, the more recent one in French: “heuripides” (i.e. Euripides) and “manuscrit oriental tres ancient”.

The text of the fragments is not that of the Greek tragedy writer but the presence of Hautin’s name (one of the most relevant clues in reconstructing the fragments’ history) allowed us to reconnect them to a Euripides manuscript that belonged to Jean-Baptiste Hautin (ca. 1580-1640). He was a French scholar and numismatist and accumulated a large library of over 10,000 printed books and manuscripts. After his death, Hautin’s two sons and his son-in-law inherited his library, and later, part of the collection passed to his nephew, Jean-Baptiste III. It is very likely that one of the sons, who bore the same name as his father, added the ex libris “J.B. Hautin” preserved in several manuscripts, sometimes together with a more or less brief description of the contents.

The French scholar Étienne Baluze (1630-1718) purchased part of Hautin’s collection, which later entered the French Royal Library, now part of the collection of the Bibliothèque nationale de France, and another part was purchased by John Moore (1646-1707), bishop of Ely. Moore’s library contained some 30,000 volumes of printed books and 1790 manuscripts, about 52 of them in Greek; in 1715, George I purchased the whole of Moore’s collection, and presented it to Cambridge University Library, where it was named the Royal Library: a major turning point in the status of the Library. An elaborate bookplate, with the legend “Munificentia Regia”, indicates the volumes presented by the king, although it was not added with complete accuracy. Both Moore’s and Baluze’s Greek manuscript collections therefore have at their cores the collection of Jean-Baptiste Hautin.

In searching for the provenance of CUL Add. 2753.1a-b, the first step was to investigate the UL’s Euripides manuscripts. Indeed, one of them, a fourteenth-century copy, used to belong to J.B. Hautin and still bears his ownership inscription, CUL MS Mm.1.11.

In comparing the two fragments with the manuscript, it was clear almost immediately that the two parchment fragments had served as endleaves (protective pages added before or after the textblock) for the manuscript before it was finally rebound.

It is not only the contents indicated on one of the fragments and the name of the owner that match; the dimensions of the leaves correspond and, above all, the areas of physical damage on the fragments perfectly match the stains and holes present on the codex.

Portions of the textile that previously made up the binding also remain on both fragment A and the manuscript, with correspondence in colour and material.

Some points remain obscure, such as when the fragments were detached from the manuscript and, of course, the history of the fragments before they became endleaves. Nevertheless, through the integration of physical evidence and historical data, it has been possible to reconnect the two items separated for many years.