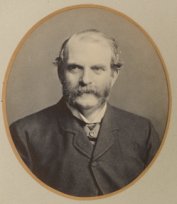 Samuel Sandars, one of the collectors who features in the exhibition

The ‘mission’ of the University Library’s exhibition centre has always been to offer the public a chance to see some of its most beautiful, precious and fascinating books and manuscripts.  The Library’s current exhibition ‘Shelf Lives: Four Centuries of Collectors and their Books’ chooses to focus not on a particular subject but on the people themselves by whose generosity the Library’s holdings have been enriched; the collectors whose passions (and, perhaps, obsessions) led them to gather together personal libraries covering any and every subject imaginable.

The ten exhibition curators were each given just a single case in which to select the highlights of an individual collector’s library.  This has created a display that ranges from the eighth century to the twentieth, and from Cambridge to Beijing via Madras, Chicago and the First World War trenches. As well as the collectors who gave them to the Library, other previous owners of items displayed include Charlemagne, Elizabeth I, Napoleon and Haydn.  Items in the cases include manuscripts, printed books, silver and velvet bindings, paper money and even a pair of slippers.

The intention of the curators is to explain something of each collector’s personal interests, and how this led to the creation of their libraries. George Lewis was chaplain to the East India Company in Madras in the late eighteenth century and while there developed a passion for Islamic texts that were at that time scarcely known in the West. He collected together a library of beautiful manuscript dictionaries, religious texts and poems for his personal use and enjoyment, which he gave to the Library along with a number of artefacts including playing cards and coins.

A collector with a completely different motivation was Francis Jenkinson, University Librarian at the time of several significant donations including the Acton collection and the contents of the Cairo Genizah. He was responsible for assembling one of the most intriguing collections featured in the exhibition. During the First World War he put out an appeal to members of the public to send examples of printed ephemera of all kinds relating to the war – informal journals, flyers, posters and so forth – so that they could be preserved for future researchers. The result is a unique collection containing many items which would otherwise have been lost to the national heritage.

These are only two of the collections featured in the exhibition, and the ten on display tell the story of a just a tiny proportion of those whose generosity and foresight have created the unique holdings of the University Library. It was impossible to include everyone, so during the six months of the exhibition the Special Collections blog will be featuring posts on other Cambridge collectors and also linking up with college and Departmental libraries across Cambridge to bring some of their own collectors to the public eye.  Watch this space to find out about more fascinating individuals and their unique collections… You can also find out more about the University Library’s named donors by browsing the pages of the various Special Collections departments.