A letter of apology to Thomas Young

Posted on 14 January 2020 by Catherine Ansorge

‘I am sorry I should have detained the proof longer than I intended, as the stone was just finished on Tuesday, and taken to Ackermann’s to be proved, which proof I was to have in the course of the day but did not receive it till yesterday’, states a letter written by a Mr R. A. Nicholson to the eminent scientist and polymath Thomas Young. The letter is written on the back of the lithographed proof sheet he mentions and is accompanied by a second proof somewhat larger in size. These show drawings made by Nicholson of Egyptian hieratic texts from papyrus originals which he is sending to Thomas Young. These were later to be published in Young’s Hieroglyphics collected by the Egyptian Society, as Plates 1 and 6.

In this letter, dated 11th September 1818, it becomes apparent that Young has commissioned Nicholson to make more drawings from the British Museum Egyptian collections. As the letter continues, Nicholson voices his concern that, with such instructions received from Young, he has not been so been successful. For example, the drawing of ‘the colossal head I cannot compleat at present, owing to the awkward position in which it lays, viz. on its back’ a reference to the giant stone head of Ramesses II sent to the Museum in 1802, not yet erected into its upright position for public view. There are practical difficulties with access to other artefacts too and Nicholson solicits Young’s further instructions. 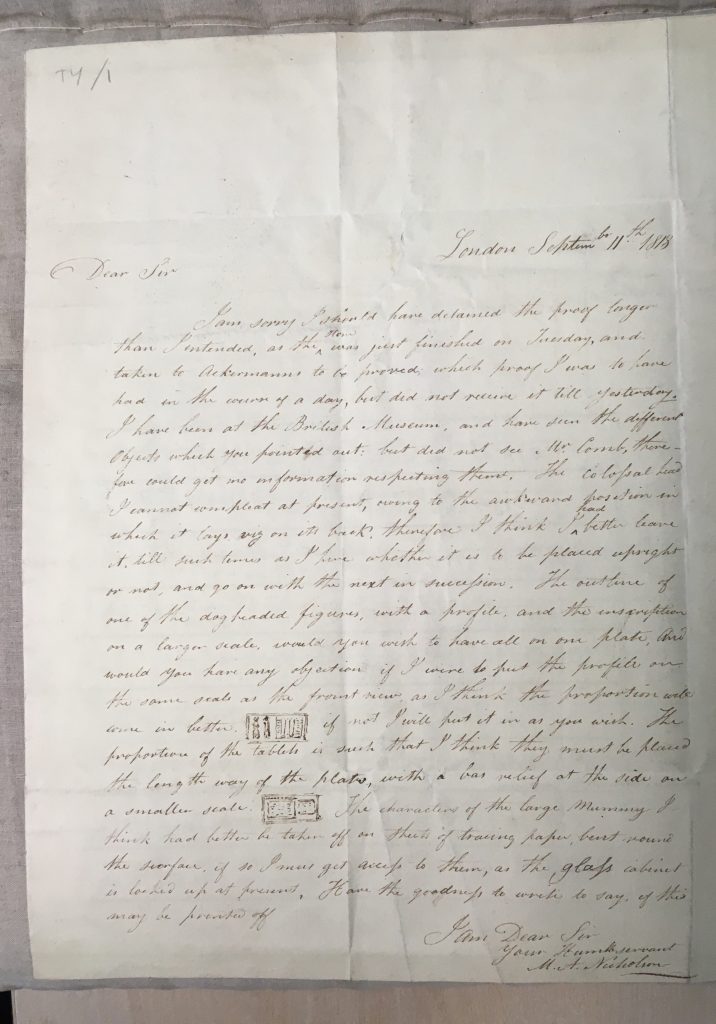 Letter written to Thomas Young on the reverse of a proof sheet of Hieroglyphs.   MS Young, f. 1v

By this date, Thomas Young was already a notable British polymath who contributed to a surprisingly wide range of subjects including medicine, natural philosophy, and language studies. Born into a Quaker family in Devon in 1773, he found during his schooldays that he had a gift for languages but subsequently decided to become a physician; he studied in Edinburgh, Göttingen and then at Emmanuel College in Cambridge. He set up a successful medical practice in London, yet he still had time to turn his interests to natural philosophy. He was appointed a Professor of Natural Philosophy at the Royal Institution in 1801 and delivered a series of lectures covering mechanics, hydrodynamics, and physics. He also made significant contributions to the study of optics, with a special study of astigmatism in the human eye. In 1818, he was made secretary to the Board of Longitude.

Perhaps his most important contribution to physics was to establish the wave theory of light, as opposed to Newton’s earlier theory that it was composed of particles. This controversy was only resolved in the twentieth century by the development of quantum mechanics. Young demonstrated his theory in his famous ‘two-slit’ experiment which still remains associated with his name today. In fact Young’s diversity of skills and knowledge led to some of his contemporaries to refer to him as the ‘last man who knew everything’. 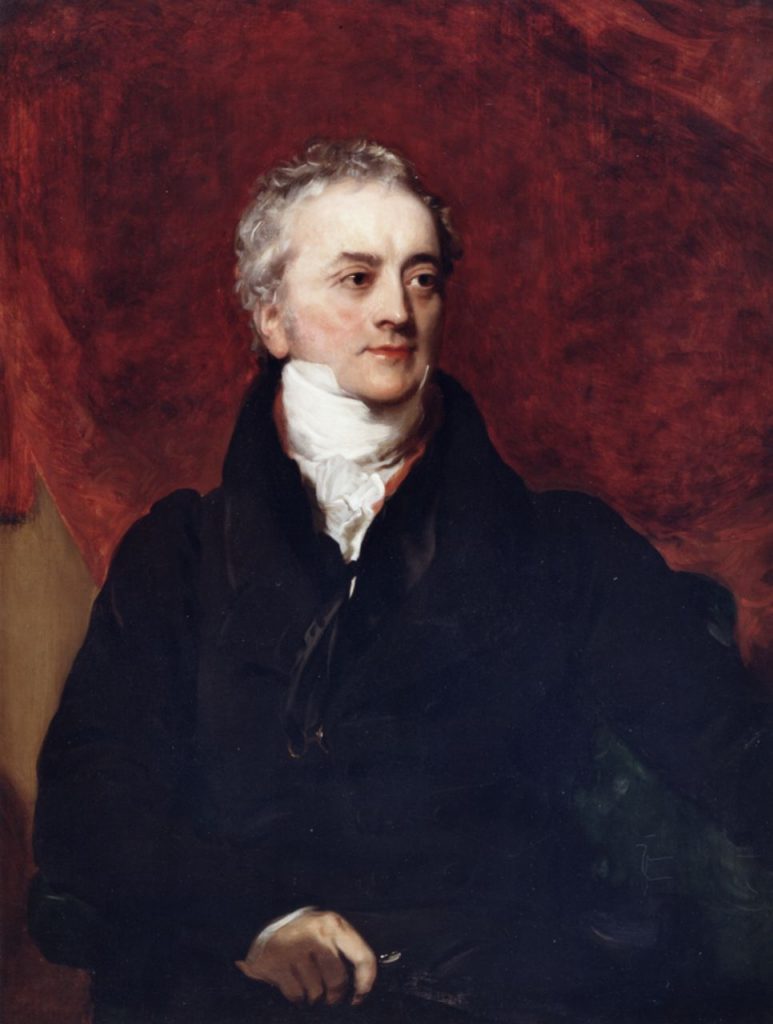 Young’s interests were not limited purely to science, he also wrote for literary journals and, later in life, returned to his interest in languages. The letter from Nicholson relates to the other, lesser-known of Young’s enthusiasms, that of his contribution to the decipherment of Egyptian hieroglyphics. The discovery of the Rosetta Stone in Egypt in 1799 and its removal to the British Museum in 1802 had stimulated a new interest in this. Written in 196 BC, the Rosetta Stone provided scholars with parallel texts of a decree written in three languages, Hieroglyphs, Demotic and Greek providing an important key to the decipherment of the Egyptian texts. The Egyptian languages had so far proved to be unreadable as their decipherment had met with only limited success in earlier centuries in Europe.

The decipherment of these Egyptian languages had proved to be a difficult problem, too difficult for any single scholar, and contributions were made by a number of people most notably Jean-François Champollion (1790-1832) the French scholar eventually credited as the decipherer of the hieroglyphic script. But his success was based to a significant degree on the earlier work carried out by Young who had already deciphered parts of an alphabet and for which he did not feel he had been sufficiently credited. The two men did meet in Paris and eventually Champollion did credit Young’s considerable contribution to his work.

To return again to the proof sheets, a caption along each lower margin, indicates that the papyri from which the drawings were made were owned by George Annesley (1770-1844), the 2nd Earl of Mountnorris. He was also styled Lord Valentia from 1793 to 1816 and under this title he travelled widely in India, the Red Sea, Ethiopia and Egypt. 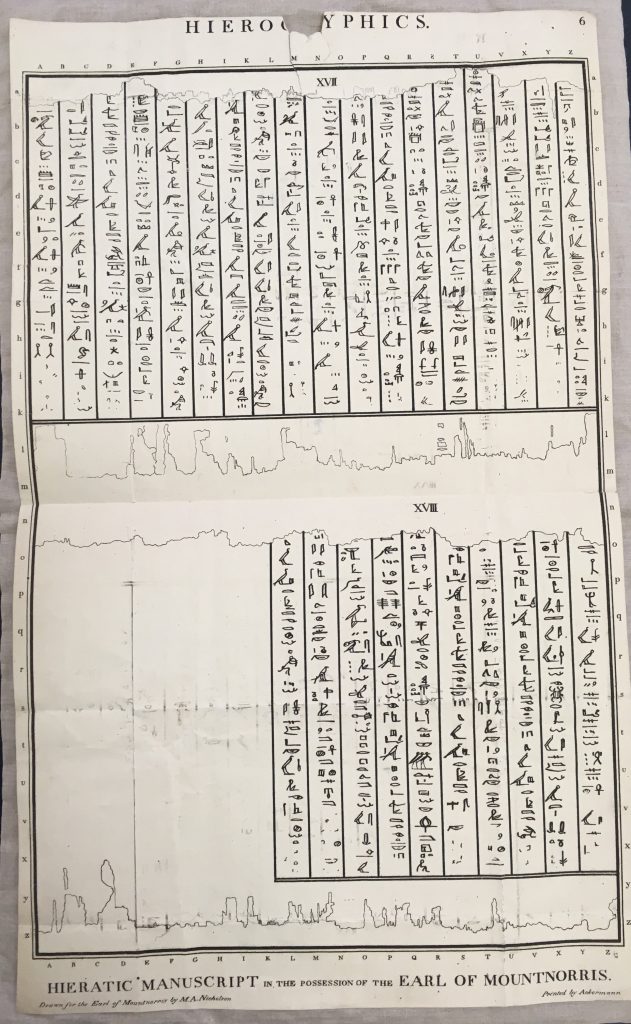 Proof sheet of hieroglyphs which has the letter to Young on the reverse.
MS Thomas Young, f. 1r

He had also appointed Henry Salt (1780-1827) to accompany him on his voyage as his secretary and draftsman and later published his travels in three volumes illustrated by Salt’s paintings. Presumably it was during these travels that he had acquired the papyri copied by Nicholson. Henry Salt became a notable Egyptologist in his own right, eventually becoming Consul General in Egypt, 1815-1827. He acquired important collections of Egyptian artefacts which he sold to the British Museum and to the Louvre. 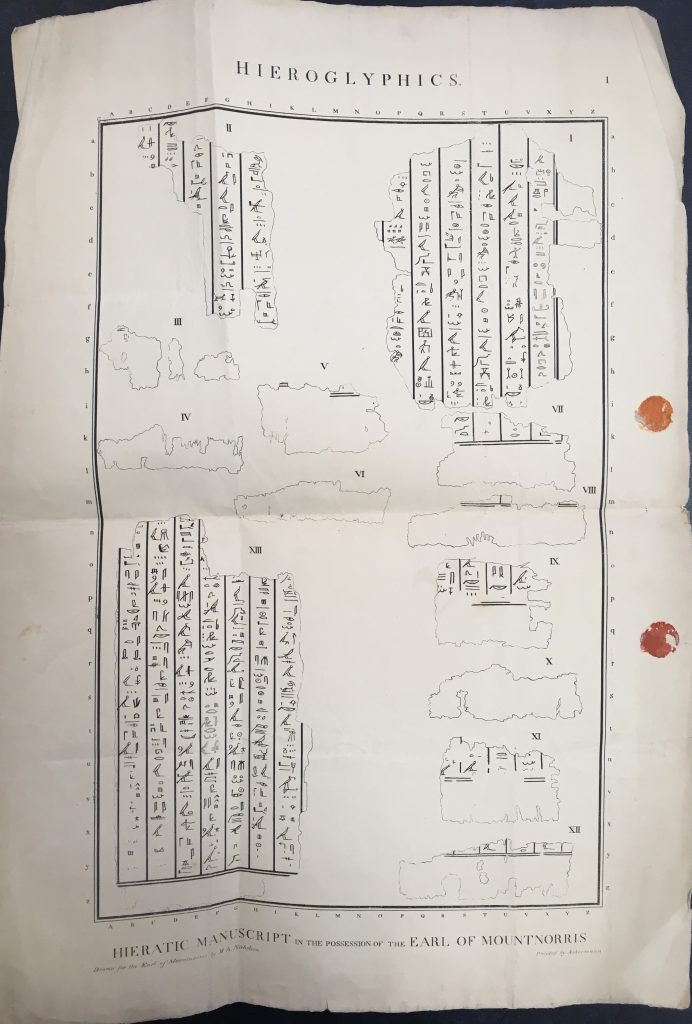 Along with Napoleon’s invasion of Egypt in 1798, a group a French ‘savants’ had also travelled to Egypt, bringing to Europe many examples of Egyptian antiquities and further studies which provided the impetus for the study by Europeans of the ancient Egyptian culture. What is so significant about the letter to Thomas Young is how, from evidence so brief as a single letter, references are made to so many aspects of this sudden explosion in the  study of Egyptology; the travels Europeans made to see Egypt for themselves, the acquisition of antiquities for display in European museums, the efforts to decipher the languages and the prduction of new publications on ancient Egypt. All of these sources brought aspects of the ancient Egyptian culture into European consciousness in the early decades of the nineteenth centuries after it had been lost from view for so many centuries.

In a final twist to the tale, an address on the back the second proof sheet indicates that these papers had been sent to George Airy at Trinity College in 1827. Airy was then the Lucasian Professor of Mathematics at Cambridge (later he became a distinguished Astronomer Royal) and he was known to Thomas Young through their common scientific interests in optics, human vision and serving on the Board of Longitude. Because of this connection these papers were originally in the archive of the Cambridge University Observatory, subsequently (because of their subject matter) transferred to the Faculty of Oriental Studies (now FAMES), then transferred to the University Library in 2013 with other personal papers of Egyptologists.

Robinson, A. The last man who knew everything. New York: Pi Press, 2006