Posted on 2 March 2012 by Catherine Ansorge 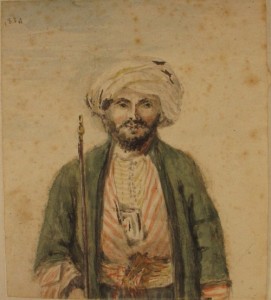 A sketch found among Burckhardt's notes, possibly a portrait from his time in Aleppo in 1809. Ms Add.273, f. 6

Housed inside a small brown box shelved alongside other Library manuscripts is an assortment of 15 slim notebooks formerly belonging to the scholar and explorer John Lewis Burckhardt. Some of these are covered in marbled paper, others in soft leather bindings, they are unremarkable to the casual observer, but full of fascinating information about Burckhardt’s preparations for his travels in the Middle East from 1809-17.

Burckhardt was born in Basel into a wealthy Swiss family in 1784, but a professional career did not hold any attractions and he felt the need to travel. He visited London where he met Sir Joseph Banks, the President of the Africa Association, and agreed on a daring commission to traverse the African continent from Cairo and across the Sahara to the Niger with the aim of discovering the river’s source.

In preparation for his expedition he was sent to Cambridge in 1807-8 to learn Arabic and to spend some time learning a variety of useful practical skills in preparation for his expedition. Though there is no evidence that he actually completed a degree here, there is ample evidence in the notebooks of his progress with Arabic language studies; in fact these are obviously Burckhardt’s Arabic homework notes and writing practice. 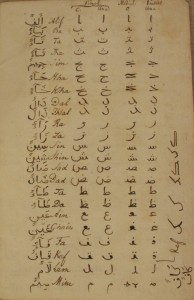 In addition to his language studies, there are notebooks on geology and mineral resources, notes on medical matters and herbal remedies and information on local customs of the places he aimed to visit. Another notebook contains astronomical notes and diagrams and information on orienteering. They are all written in a tiny forward-slanting hand in English, Latin or German. At this time he also travelled on foot in the South of England perhaps as training in long-distance walking, in readiness for the rigours of his later explorations. One of the notebooks contains a number of sketches of scenes and monuments he visited along the way. In fact his sketching skills proved very valuable and he used them frequently to record scenery and antiquities during his later travels.

From 1809 to 1817, he travelled in Syria, Egypt and Arabia; he went by the name “Sheikh Ibrahim Ibn ‘Abd Allah” to disguise his European identity. During this time he acquired a first-hand knowledge of the region and its peoples from the grass-roots perspective. He also converted to Islam and was one of the first Europeans to make the pilgrimage to Mecca. Burckhardt travelled in the Middle East for only a few years but his published works can astonish the reader by their clarity, reliability and detail. He never carried out his original plan to cross the desert from the Nile to the Niger as tragically, he fell ill with food poisoning and died in October 1817. He was buried in Cairo. However, the Africa Association did publish the texts of Burckhardt’s notes and diaries with a great deal of success. His ‘Travels in Nubia’ was published in 1819, ‘Travels in Syria and the Holy Land’ in 1822 and ‘Travels in Arabia’ in 1829. 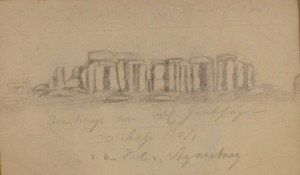 Burckhardt practising his sketching skills on a view of Stonehenge. Ms Add.282.15. f.4

In August 1812, Burckhardt visited the ruins of Petra, the capital city of the Nabataeans, which was unknown to Europeans until this date. As this year marks the 200th anniversary of this visit of discovery, it provides a convenient opportunity to commemorate Burckhardt’s extraordinary achievements as a scholar, traveller, collector, writer and perhaps the first European anthropologist of Middle Eastern societies. There will be more to say about Burckhardt and his travels around the time of this centenary in August…

1
In the spotlight, Manuscripts, Near and Middle Eastern J. L. Burckhardt