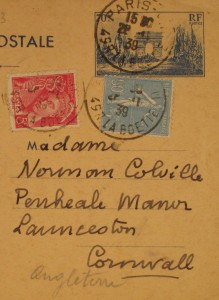 During the First World War, the poet, playwright and diplomat Paul Claudel (1868-1955) struck up a friendship with Audrey Parr, the wife of a British diplomat. Her granddaughter, Mrs L. M. Jack, generously presented the Claudel letters, postcards verses and books accumulated by Mrs Parr to the University Library, and an online catalogue of the archival material has recently been added to Janus.

Claudel first met Audrey Parr during the First World War. The daughter of a French Alsatian father and a British mother of Polish and Brazilian parentage, Audrey had married Raymond Parr, then Third Secretary in the British Embassy in Rome, in 1913. Claudel undertook a mission there in 1915-16, and the friendship deepened when both Raymond Parr and Claudel were appointed in Rio de Janeiro. In Brazil Audrey Parr collaborated with Claudel and his secretary, the composer Darius Milhaud, in the ballet L’Homme et son Désir, for which she provided set designs. She and Claudel met intermittently in the 1920s as he and Raymond Parr pursued their careers to various countries; Claudel was made ambassador to Tokyo and Washington, while the Parrs were posted to Teheran. After the Parrs’ separation in 1930 Audrey settled in London, and married Captain Norman Colville in 1938. On the outbreak of the Second World War she enlisted as a nursing officer in the Red Cross, and was killed in a road accident between Launceston and Egloskerry on 7 May 1940.

Claudel’s letters and poems frequently show a whimsical, almost flirtatious, side to his character; he often signed with his pet name ‘Cacique’, and hoped that Parr might follow him around the globe. But beneath the lighthearted banter, the fun of poems such as the ‘Jolie pensée en forme de camaraô’, and the avid gossip and news, the correspondence demonstrates the strength of an enduring friendship based on mutual passion for literature and the arts.

Most of the letters and several of the verses were edited and annotated by Michel Lioure in Lettres de Paul Claudel à Élisabeth Sainte-Marie Perrin et à Audrey Parr (Cahiers Paul Claudel, 13, 1990; P735.d.1.13, on North Wing 2). The archive is the Library’s MS Add. 9591, and may be consulted in the Manuscripts Reading Room by those holding an appropriate Library ticket.

Mrs Jack’s donation also comprised 34 printed books, of which 27 contain manuscript dedications from Claudel. Most of these are texts by Claudel himself, published between 1911 and 1939. The collection also includes a rare edition of twelve poems from Baudelaire’s Les fleurs du mal, published in 1917, which incorporates facsimile reproductions of the original manuscripts. Amongst the most spectacular items are Claudel’s Cent phrases pour éventails, published in a limited edition of 200 copies in Tokyo in 1927, and an edition of Victor Segalen’s Stèles, printed in Beijing in 1914 on one side of leaves folded double in Japanese fashion. The books stand together with the classmark stem CCA.45, and may be consulted in the Munby Rare Books Room.