Posted on 12 April 2012 by Special Collections 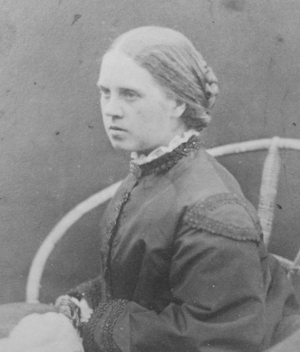 Henrietta Darwin at the time of her marriage

A small lockable leather diary in the archive at Cambridge University Library is leading us to reassess one of the key relationships in Charles Darwin’s life.

With the permission of Darwin’s family, Volume 19 of The Correspondence of Charles Darwin, which we’re publishing this week, is making public for the first time the short but intense – and intensely revealing – personal journal of Darwin’s daughter, Henrietta.  Written over the period March to July 1871, the year of the 28-old Henrietta’s sudden marriage to a man she had known for less than three months, the journal introduces a confident, intelligent, reflective, and passionate young woman. To anyone who has only met her as the overly anxious hypochondriac aunt in Gwen Raverat’s Period Piece, this Henrietta is unrecognisable.

This was also the year in which Henrietta’s father published his most enduringly controversial work The Descent of Man and Selection in Relation to Sex, a book she helped edit, and, taken together with Darwin’s letters from the period, the journal dramatically overturns previous perceptions of her character and role.  Often dismissed as a conservative or even a negative influence on her father’s work,  driven by a desire for respectability to acts of censorship, Henrietta emerges instead as a free-thinker; she was  sceptical of the contagious emotion of evangelical missions, and unable to reconcile the idea of a personal , benevolent God either with the concept of free will or with the suffering and wastefulness of the natural world.

I want him to take me in his arms & say I shall never leave him.

In June 1871 Henrietta met Richard Buckley Litchfield, a barrister and lecturer in music at the London Working Men’s College;  they were married in the parish church in her parents’ village of Downe, Kent, on 31 August.  The intimate and deeply reflective journal entries from July, which hint at originally unrequited passion, cover the period of their courtship.  Reading at times like teenage romantic fiction, with all the agonies of uncertainty and longing, it also dissects Henrietta’s reasons for choosing to be married in church–a decision she did not reach lightly–and her sadness at leaving her parents.

This view seems to cast what few convictions I have to the winds.

In a very rare glimpse of the intellectual life of the women in Darwin’s circle, Henrietta reflects on a wide-ranging debate with one of her cousins, Frances Julia Wedgwood – known to the family as Snow – on free will, good and evil, and the possibility of eternal life.  Both women demonstrate a striking sophistication of thought in their differing assessment of the implications for religious thinking of Darwin’s “Development Theory”, but although Henrietta’s arguments are reminiscent of Darwin’s own discussion of religious belief in his correspondence and other writings, the journal reveals a thoughtful woman reasoning her way to a humanistic position that is very much her own.

The diary (MS DAR.247) is part of the collection of Darwin Papers at Cambridge University Library.

By permission of Cambridge University Press and Henrietta’s family you can also read the text of her diary online at the Darwin Correspondence Project website.