Whose ‘Shelf Life’ is it anyway?

A book can have many lives, passing from one collector to another over the course of centuries, and in each collection it finds new meaning. When I was choosing what to include in the case in the ‘Shelf Lives’ exhibition on ‘The Design of Friendship: The Montaigne Library of Gilbert de Botton’, I came across a copy of Charles Sorel’s La bibliothèque françoise (1664) with a very interesting collecting genealogy. Not only had it belonged to Gilbert de Botton, but two other ‘Cambridge collectors’ had also at one time owned this book: Kathleen ‘Blazing’ Butler, the flame-haired mistress of Girton College, whose collection of Italian books came to the Library in 1951 (classmark CCA–E.17), and the bibliographer A.N.L. ‘Tim’ Munby, whose collection of auction catalogues, booksellers’ catalogues and proposals and specimens is now the University Library’s Munby collection, and after whom the Munby Rare Books Room is named.

For Gilbert de Botton, then, the interest of Sorel’s book is clear. His collection includes numerous works of secondary criticism about Montaigne, of which this is one of the earliest. As with so many of the books in his collection, he has marked the passage of interest with what looks like a scrap of paper torn from an envelope.

Kathleen Teresa Blake Butler (1883–1950) read Medieval and Modern Languages at Newnham College, Cambridge, and from 1915 was director of studies in modern languages at Girton College.

She soon became known among her new colleagues as Blazing Butler, the redhead whose impatience with bureaucracy and rigid rules was liable to boil over at staff meetings: a tendency which her professionalism and sense of duty tamed over the years, making her an excellent and restrained chairman. Her prodigious capacity for work was boosted by her ability to catnap. (ODNB)

Butler became University lecturer in Italian in 1926, following the opening up of lectureships to women, and in 1942 was elected mistress of Girton. She was instrumental in the negotiations that led the University to grant full membership to women in 1948. 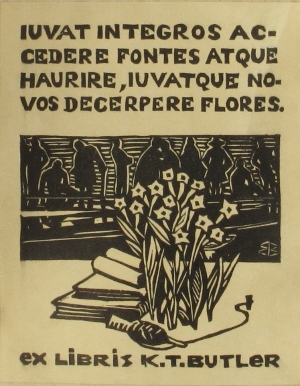 She lectured in French as well as Italian, and in 1923 published A history of French literature. We don’t know when she acquired her copy of Sorel’s La bibliothèque françoise, but it was clearly part of a working library and complements her Italian books which were purchased by the University Library in 1951 (classmark CCA–E.17). KTB’s distinctive bookplate quotes from the prologue to Book 4 of Lucretius’ De rerum natura:

It’s pleasing to think that the book found its final home in the Montaigne Library of Gilbert de Botton, given that Lucretius was such an important source for Montaigne and that Montaigne’s own, heavily annotated copy of De rerum natura (1563), which is on display in ‘Shelf Lives’, is the jewel of de Botton’s collection.

Tim Munby worked as a cataloguer at both Bernard Quaritch Ltd and Sotheby’s before being appointed as librarian of King’s College, Cambridge in 1947. At Cambridge, he organised a weekend for visiting bibliophiles and also presided over a society of undergraduate book collectors, which met in his rooms. In 1949, he co-founded the Cambridge Bibliographical Society. Amongst his own collection of some 7000 to 8000 volumes were works of early bibliography, and it is in this context that Sorel takes his place. Those works not acquired by the University Library after his death were sold at Sotheby’s (22–23 March 1976; 5 April 1976).

In the end, Sorel’s work didn’t make it into the ‘Shelf Lives’ exhibition; as always, there were too many good books from which to choose. But as an example of the many lives a book can have, and of how books can survive beyond the ‘shelf lives’ of their collectors, it couldn’t be better.