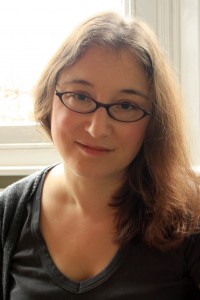 For some time the Library has been engaged in building its collections of papers of modern and contemporary poets with local Cambridge connections, whether to the town or the University. Accessions of archival material relating to writers as varied as Siegfried Sassoon, Nicholas Moore, Anne Stevenson and Peter Scupham have significantly enhanced our holdings in this area in recent years.

Last month we were delighted to receive the generous donation of a collection of poetry drafts by Joanne Limburg. Born in London in 1970, Joanne read Philosophy at King’s College Cambridge, and was a Royal Literary Fund Fellow at Magdalene College from 2008 to 2010. The recipient of an Eric Gregory Award in 1998, she has had two full-length volumes of verse published by Bloodaxe Books: Femenismo in 2000, which was shortlisted for the Forward Prize for Best First Collection, and Paraphernalia in 2007, which was a Poetry Book Society Recommendation. A pamphlet collection, The Oxygen Man, has recently been published by Five Leaves Press.

The drafts which make up her donation include poems published in the Bloodaxe collections, together with an equal number which have either appeared only in anthologies, journals and her prose memoir, The Woman Who Thought Too Much, or have not seen print at all. The compositional development of over two hundred pieces can be traced in the papers, and in many cases the successive drafts of a poem are complemented by notes which give an insight into the thought-processes and written sources which lie behind the work. The new accession develops the Library’s holdings of poetry manuscripts in several ways, and in particular is our first collection relating to a poet who established her reputation in the twenty-first century.

A catalogue has been published on Janus, and the papers, which have the reference MS Add. 9977, are available for consultation by anyone holding a Library reader’s card valid for the Manuscripts Reading Room.