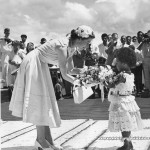 Y3091E/179 The Queen receiving a bouquet of flowers from a Fijian princess, Suva, © Royal Commonwealth Society

Her Majesty Queen Elizabeth II’s Diamond Jubilee offers an excellent opportunity to celebrate her devoted service as Head of the Commonwealth, as reflected in the Royal Commonwealth Society Collections at Cambridge University Library. In fact, this began well before her reign, for as Princess Elizabeth she had embarked upon a major Commonwealth tour in 1952, on behalf of her father King George VI, who was too ill to undertake it.  Princess Elizabeth was in Kenya when she received news of her father’s death on 6 February 1952 and returned to Britain.

Within five months of her coronation in June 1953, however, she set out upon the most ambitious Royal Tour yet seen, flying to Bermuda and, thence to Jamaica, boarding S.S. ‘Gothic’ which was to be her base for the remainder of the tour. After visits to Fiji and Tonga, ‘Gothic’ reached New Zealand on 23 December for a stay of over a month. February and March were spent in Australia and the return journey included Ceylon, Aden, Uganda, and Malta, where the Queen and the Duke of Edinburgh were reunited with their two children and whence they sailed via Gibraltar to London on the new Royal Yacht ‘Britannia’. 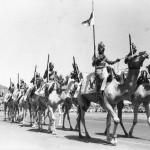 The Royal Commonwealth Society and its local branches were closely involved in the organisation of the Royal Tour, and its library preserves a fascinating collection of photographs, invitations, programmes and other souvenir items documenting its many events. To view on-line catalogues of the archives please see: