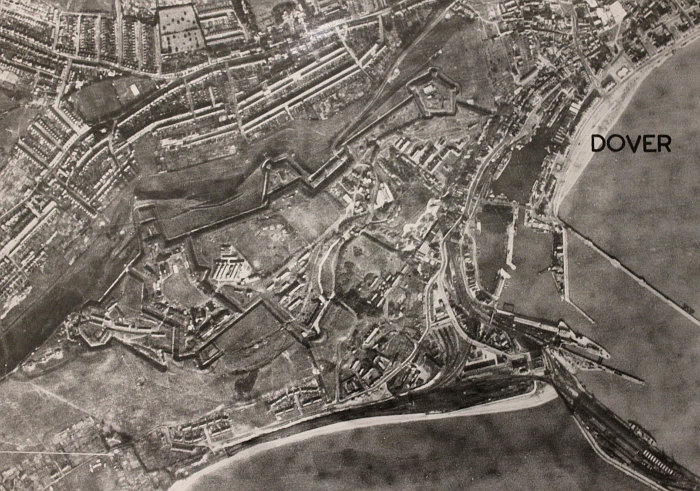 A ‘guest blog’ by David Langley 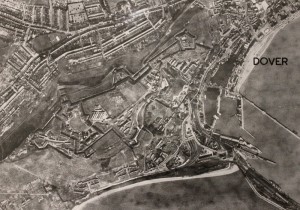 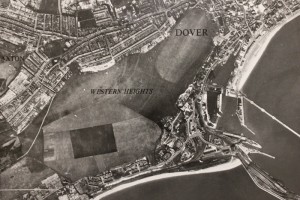 In 2010 the Library staged a fascinating exhibition – Under Covers: Documenting Spies – from its own collections and other institutions, of documents that gave a glimpse of the world of espionage over the centuries. One exhibit was particularly interesting for me – a grainy pair of aerial photographs of my home town Dover, taken around the time I was born in the years immediately after the Second World War.

The military and civilian potential of aerial photography had been recognised in the First World War, but it was the Second World War that provided the major drive for technology and techniques and provided tangible evidence of what could be achieved. As the caption to the exhibit said:

‘by the end of the Second World War Ordnance Survey mapping of the United Kingdom had become outdated and the Government embarked on a photographic survey of the country as a timely way of providing the required revisions. The resultant photo-maps were produced between 1947 and 1953 at six inches to the mile (1:10,560) and, for selected towns, at the more detailed scales of 1:2,500 and 1:1,250.

Aware of the extent to which its maps might aid foreign intelligence agencies, the Government wished to avoid showing sensitive sites on the imagery and issued censored sheets of some areas, usually identified as edition ‘B’. Comparing the two versions of the photo-mosaic maps of Dover on display, it can be seen that in the later sheet (published in April 1950), fields have replaced fortifications south-west of the town. In addition, radar installations to the east have been excised from the mosaic and replaced with open grassland’. 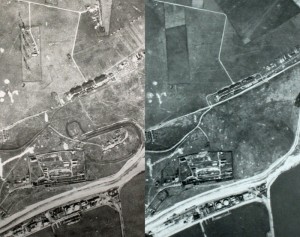 To the east of Dover. Unaltered version, 1947 (left) and altered ‘B’ edition (right) of Ordnance Survey Air Photo Mosaic sheet 61/34SW (detail). The radar installation can be seen in the rectangular field top left

My interest remained personal. The mosaics gave me an unusual opportunity to see the area where I was born and grew up, and I could compare what the censors saw as vulnerable with what I had since learned from digging into the history of the town plus my work in the Ministry of Defence.

With hindsight, the censors’ choice did seem a little odd. The ‘fortifications south-west of the town’ were largely redundant by the time the maps were printed; part became a prison and I remember the rest as a wonderful playground. The radar installations stood high on the eastern cliffs and were clearly visible to passing shipping and anyone on the French coast with binoculars or a telescope. They had been a major preoccupation for the German military during the war.

Then again, the secrets of radar technology had been closely guarded and, as I had found by chance in a speculative web search on Dover’s history, Canadian papers show that the fortifications were used by commando forces under Lord Lovat as a staging post in highly classified raids on the French coast.  Perhaps the censors were more concerned with past associations than present use or prominence.

The caption also noted that ‘… Copies of those sheets that were published can be found in the Legal Deposit Libraries although access to the uncensored sheets, which the libraries had been allowed to keep, was not permitted until 1995 when they were officially derestricted’.

I learned from Library staff that derestriction did not lead to a rush of publication.  In a 2004 paper for Sheetlines, the newsletter of The Charles Close Society (issue 71), Dr. Christopher Board, gives a detailed account of the history of this project.  He paints a colourful picture of the bureaucratic machinations involved in matching the planners’ need for prompt information to guide post war redevelopment, and the foresight shown in recognising that need during the war, with ‘the system’s need to balance security concerns, and of course, costs.  He also describes his own frustration with ‘the system’ during the transition from restricted use to availability.

More recently, the mosaics received wider attention when some of Scotland were added to the Scotland Gallery on the website of the Royal Commission on the Ancient and Historical Monuments of Scotland and a full set for Scotland placed on the National Library of Scotland’s website  – for background, see CAIRT, Newsletter of the Scottish Maps Forum, Issue 16, January 2010.

I had clearly stumbled on a valuable body of photographic material that scholars could explore in the context of other official papers now available in national archives, but having sated my immediate interest I went on my way, proudly clutching copies of the Dover mosaics and using them, whenever the opportunity arose, in my lectures on the history of ‘Secret World’.

Some months later, however, a chance conversation revealed that Cambridge University had acquired a number of sites from the military after the war and that some of these had to be decontaminated before they were finally handed over.  It transpired that one of these, at Lord’s Bridge, now part of the radio observatory site near Cambridge, had begun its working life as a World War 2 ammunition depot and later housed an RAF unit responsible for the bulk storage of mustard agent when it was the mainstay of the Allies’ chemical warfare capability.  Bulk storage and local filling of munitions in time of need, at a number of sites across the country, had been chosen to overcome the problems of long-term storage in individual weapons.  The origins and use of these sites are now publically acknowledged but not widely known or disseminated.  One of the most informed accounts can be found here and here on the web site of Subterranea Britannica an organisation dedicated to the exploration of ‘man-made and man-used underground places’.  It also tells the dramatic story of an explosion and fire at the Lord’s Bridge depot in 1955 when RAF personnel showed remarkable courage in the dealing with the fire and local residents were warned to stay indoors while it raged.  The Secret History of Chemical Warfare by N.J. McCamley, Leo Cooper Ltd, 2006 describes the place of depots like Lord’s Bridge in the wider history of British chemical weapons, but cites few sources.

An interesting piece of military history in itself, but having seen the Dover maps I began to wonder.  Did the Library have photo mosaics of the Cambridge area? Was Lord‘s Bridge included?  Had the ammunition stores and ‘forward filling depot’ been removed?  A telephone call to Anne Taylor, Head of the Library’s Map Department brought a positive response on all counts. 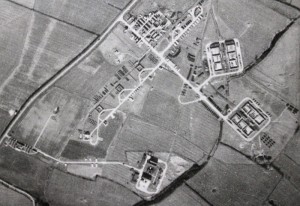 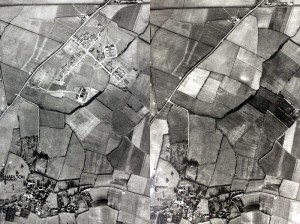 Another fascinating glimpse of the wealth of material waiting to be mined by scholars.

This interplay between the potential benefits of aerial photography, its costs and concerns about what it could reveal in the hands of ‘enemies of the state’ was a foretaste of things to come.  Ironically, the documents in the exhibit next to the photo mosaics gave a taste of where they would go, telling of the 1960 Moscow trial of ‘the American Spy-Pilot Francis Gary Powers’ … the caption for this display captured what had been achieved since the time of the mosaics and the political price the Power’s incident brought … ‘Overflying national territory without permission is regarded as an illegal breach of sovereignty, and the celebrated ‘U-2 Affair’ led to a severe diplomatic rupture at the height of the Cold War. The shooting down near Sverdlovsk (Yekaterinburg) on 1 May 1960 of a United States spy plane en route from Pakistan to Norway led the Soviet Union to withdraw from a planned summit conference in Paris, and embarrassed the United States President, Eisenhower, who was forced to offer to suspend espionage flights over Russia. The propaganda value of the incident for the Soviets is illustrated by this booklet issued in London. Gary Powers was sentenced to ten years’ imprisonment, but was freed in 1962 in exchange for the Soviet spy Rudolf Abel …’ and that was just the next step.