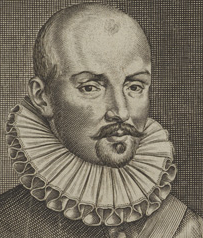 Portrait of Montaigne from Rousseau's copy of the Essais (Paris, 1652)

Cambridge University Library’s copy of Montaigne’s Essais (Paris, 1652), formerly owned and annotated by Jean-Jacques Rousseau (1712–1778), currently features in a major exhibition at the Panthéon, Paris to celebrate the tercentenary of Rousseau’s birth. Rousseau’s remains were interred in the crypt of the Panthéon in 1794, sixteen years after his death, and the exhibition brings together more than 150 items associated both with Rousseau and his oeuvre and Rousseau and his image.

Rousseau’s copy of the Essais is part of The Montaigne Library of Gilbert de Botton held at Cambridge University Library, and is one of only eighteen volumes left at his death.

It was bequeathed to his friend Mme de Corancz, then passed to Hérault de Séchelles, who was guillotined on 5 April 1794. Its subsequent whereabouts were unknown until its appearance for sale at Christie’s in 1995. Montaigne’s influence on Rousseau—on his views on education, for example, or his confessional style—was profound and complex. There are pencil annotations on four pages, as well as several marked and underlined passages. On p. 282 Rousseau has noted a passage on the loss of friends and written ‘amitié’ in the margin.

The whole volume has been digitised by the Library and is available as part of the collection ‘Montaigne à l’œuvre’ on the Bibliothèques Virtuelles Humanistes (BVH).

The exhibition ‘Jean-Jacques Rousseau et les Arts’ runs from 29 June 2012 to 30 September 2012 at the Panthéon. For further information, see http://www.monuments-nationaux.fr/en/news/headlines/bdd/actu/1073/jean-jacques-rousseau-et-les-arts//.