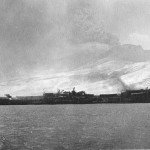 ­­The Royal Commonwealth Society Library has just published an item level catalogue of a photograph collection, Y307E, which strikingly records one of the great natural disasters in human history: the eruption of Mont Pelée on Martinique during April and May 1902. The volcano, approximately 4,500 feet in height, is located on the northern end of the island, and was known to its original Carib inhabitants as ‘the fire mountain’. The main eruption occurred on the morning of 8 May, and the coastal city of Saint-Pierre, which was located about 6 miles to the south, was annihilated by a pyroclastic flow of superheated steam, volcanic gases and dust. Virtually all of Saint Pierre’s 30,000 inhabitants perished and the death toll was increased by numbers of refugees who had fled to the city during the earlier stages of the eruption. The blast and subsequent fires left little of the city standing and devastated an area of roughly 8 square miles. 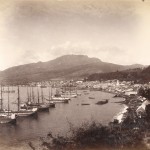 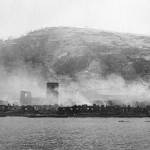 The importance of this collection is highlighted by complementary material held by the RCS. Another collection of West Indian photographs from the late nineteenth century, Y307A, preserves a rare visual record of Saint Pierre before the catastrophe. The bustling commercial centre had been Martinique’s most populous city, and was noted for the beauty of its seventeenth-century architecture. Juxtaposing the two collections graphically emphasises the extent of the destruction and the tragic human loss of life. 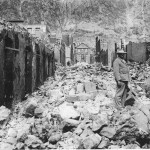 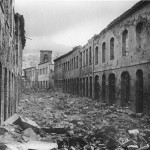 The RCS also hold the papers of Sir Henry Hesketh Bell, who was Administrator of Dominica at the time. Bell visited Saint Pierre soon after the eruption and left a haunting description of the stricken city which:

‘… used to be one of the finest in the West Indies and was more than two centuries old … And now it is nothing but a scene of awful desolation. A festering heap of ash-coloured ruins covering the corpses of more than 30,000 souls hurried into eternity. We could see no sign of colour anywhere; nothing but sad grey stones under a doleful, threatening sky … We had great difficulty in making our way along even the broadest of streets; the buildings bordering them have fallen like houses of cards. The debris, in fact, lay so thick in the roadway that we scrambled about almost level with the first floors of the houses. A thick coat of dark grey mud covered everything and increased the impression of utter desolation, Hesketh Bell, ‘Glimpses of a governor’s life’ (London, 1946), pp. 62-63.

The provenance of Y307E is unknown, but it is possible that the photographs were taken by a member of the American National Geographic Society Expedition which visited Martinique soon after the event. The desire to understand the causes of this eruption and to predict future events inspired the birth of volcanology as a modern science.

For on-line descriptions of the photographs in Y307E please see:

The original photographs, which have not been digitised, may be viewed in the Manuscripts Reading Room.

For background reading on the eruption please see: