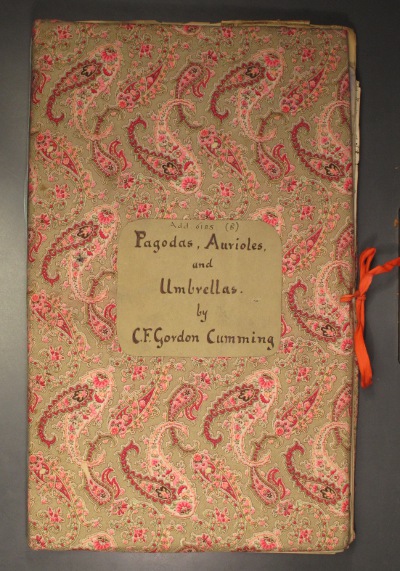 A particularly prescient manuscript for this year has recently been added to Janus, the online catalogue for Cambridge archives and manuscripts. MS Add. 6185 is a handwritten draft of an article entitled ‘Pagodas, Aurioles and Umbrellas’ by Constance Gordon-Cumming. In the article, which would go on to be published in The English Illustrated Magazine, she relates the history and cultural significance of these three rather random items in Asia.

Gordon-Cumming was one of twelve children (one being the famous lion-hunter, Roualeyn Gordon-Cumming) to Sir William Gordon Gordon-Cumming of Altyre and Gordonstown and Eliza Maria. She developed a love of travel and writing after spending a year with her sister in India. In an age where women were expected to marry, have children, and take care of their families and homes, Gordon-Cumming became one of the handful of brave and adventurous Victorian women travellers, including the likes of Isabella Bird Bishop, Mary Kingsley, and Marianne North, who travelled into little-visited areas of the world, accomplishing this feat without fear or care of what society thought of her. For twelve years she visited many places around the world, including Fiji, California, Hawaii, the Hebrides, and Ceylon, and documented her travels in books such as At Home in Fiji and Two Happy Years in Ceylon. As well as being an accomplished writer she also painted watercolours which are housed in galleries around the world.

The manuscript was presented in 1919 to the Library by the author. It is covered with a beautiful pink damask fabric and is full of illustrations and watercolours produced by Gordon-Cumming and others, as well as newspaper cuttings from that era. 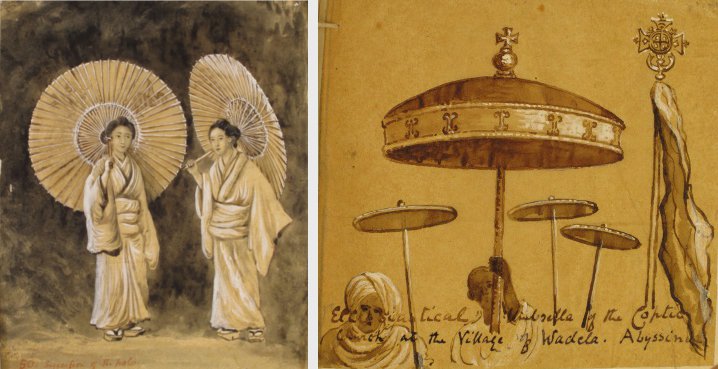 Much of the script is devoted to umbrellas and the early role they played in lives of people in China, India, and Tibet. Rather than being a necessity during inclement weather, they were mostly used to denote the importance of royal or noble persons. Gordon-Cumming states that:
“[I]t certainly is strange that in almost all nations, and in all ages, there should have been the same singular jealous royal monopoly of so useful an object as a portable sun-shade, which was also available as a protection against rain. But so it has ever been, even in the highest civilizations of early ages. We find it depicted on some of the most ancient sculptures of Persepolis, and also on those of Babylon and Nineveh, but always as a distinctive mark of honour for the great men and rulers.” 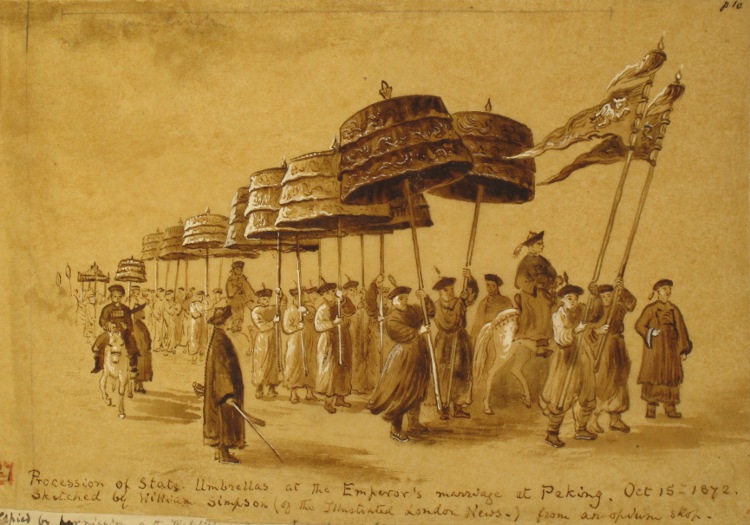 p. 12 Procession of the State Umbrellas at the Emporer’s marriage at Peking, 1872.

Even as recently as 1970, foreign dignitaries and royalty were accompanied by one or more ceremonial umbrellas on their travels throughout India. Many members of the British monarchy were treated with this ceremony, such as the Prince of Wales in 1877, who was often escorted by a golden parasol .

The catalogue entry can be found on Janus here. Selections of her books are available to read in the Munby Rare Books Room and the manuscript is available for consultation in the Manuscripts Reading Room. 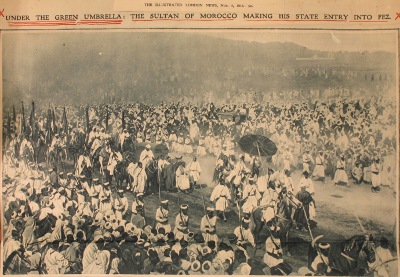