‘This lamented Minister’: the papers of Spencer Perceval at Cambridge University Library

Posted on 1 November 2012 by Special Collections 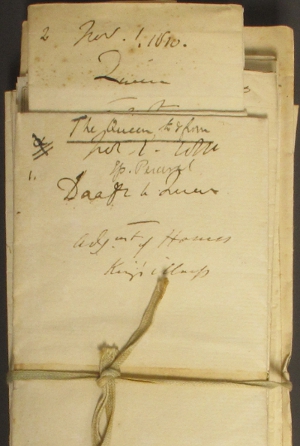 Letters from the Spencer Perceval papers

Spencer Perceval, Prime Minister, was shot dead in the House of Commons lobby on 11 May 1812. His killer was John Bellingham, described by P.J. Jupp in the Oxford dictionary of national biography as ‘a merchant with an uncontrollable grudge against the British government’. Perceval retains the melancholy distinction of being the only British Prime Minister to have been assassinated.

This year sees not only the bicentenary of the assassination; 1 November 2012 is the 250th anniversary of Perceval’s birth, and we mark the occasion with a look at Perceval’s career and his personal papers held at Cambridge University Library (MS Add. 8713).

Perceval (1762–1812) was a Tory in politics. Elected MP for Northampton in 1796, he came to high office in 1807 as Chancellor of the Exchequer and Leader of the House of Commons in the Duke of Portland’s administration. Following the Duke’s stroke in 1809, Perceval emerged as the preferred choice to succeed him as Prime Minister. In two-and-a-half years as PM, Perceval remained, in Jupp’s words, ‘remarkably resilient’, in the face of the Napoleonic War abroad and a strong parliamentary opposition at home. He had also to soldier on as Chancellor. On top of all that, his strong supporter King George III lost his final battle with insanity late in 1810. The Prince Regent, fearing what his father’s reaction might be if he recovered and found that his son had replaced Perceval, kept him as PM and by 1812 looked favourably on him.

There are three major archival sources for Perceval’s political career: the Royal Archives at Windsor, for his correspondence with the King and royal family; the British Library (Add. MSS 49173–86, 49188–95); and Cambridge University Library (MS Add. 8713). By comparing the subject matter of our collection and the BL’s, it is clear that they form two parts of the original Perceval archive. When they were split is not known. The BL’s part descended in his family and was presented by the widow of his great-grandson Dudley Perceval in 1956.

Our collection however was purchased from the Cambridge historian of the ‘long 18th century’, Sir John Plumb, in 1988. Some of our papers were used by the first biographer of Perceval, Sir Spencer Walpole, in 1874. They were sorted and numbered by Walpole’s nephew Reginald Walpole in 1906, so for whatever reason they must not have been returned to the Perceval family after 1874. From Plumb we also purchased the correspondence of Thomas Walpole, brother of the first Prime Minister Sir Robert Walpole, and it is possible that Plumb acquired the Perceval papers from the same Walpole source.

What do our papers include? Much correspondence with King George III, Queen Charlotte, and the Prince of Wales; correspondence on the King’s health, with the Prince, politicians, royal officials and physicians, including regular medical bulletins and reports; an inquiry into the conduct of the estranged Princess of Wales; (ongoing) royal debts; correspondence on the formation of Perceval’s ministry; and papers on the conduct of the war, especially the abortive Walcheren expedition to the Netherlands. There is much to interest political, social and medical historians in our Perceval papers.

MS Add. 8713 may be consulted in the Library by anyone holding a reader’s card valid for the Manuscripts Reading Room, where a catalogue of the collection is available.

0
In the spotlight, Manuscripts Spencer Perceval