Posted on 9 September 2013 by Catherine Ansorge 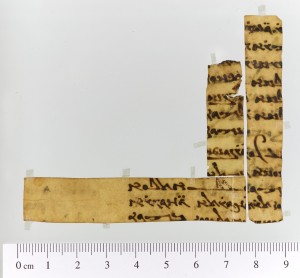 Several of the newly conserved fragments. Ms. Or.2552

A lecture by Professor Nils Arne Pedersen on ‘The Syriac-Manichaean “Allberry fragments”: how they were rediscovered, and what they can tell us’ will be held at 11 am on Saturday 14th September in the Milstein Seminar Rooms at Cambridge University Library.

The lecture is to celebrate the Library’s acquisition of a set of small manuscript fragments written on vellum which date from around the 4th century CE and originated in Middle Egypt.

What are the fragments?

The Allberry fragments contain portions of a Manichaean text, written in Syriac and in a form of Aramaic script often referred to as Manichaean script. Only a small number of such tiny fragments seem to be preserved worldwide. In fact Mani (c. 216-277 AD), the founder of the Manichaean world-religion, wrote his oeuvre in Syriac, but the huge Manichaean literature which in the 20th century has been found in Central Asia and Egypt, and which is of great interest for the history of religions, theology, and many philologies, is not in Syriac. Many scholarly efforts are invested in reconstructing the original Syriac terminology of Mani and the first Manichaeans.

These fragments pre-date, by a couple of centuries, the only other material written in this script, which are on incantation bowls from Mesopotamia, though there are a few other fragments of Proto-Manichaean in existence. These particular fragments appear to have come from the Manichaean communities in Egypt and represent the most western location for the spread of this Syriac font which originated in Mesopotamia.

How did they survive?

The five tiny fragments were probably cut from a larger manuscript at an earlier time in its history, and were used in the binding of a later manuscript, and so were preserved by accident at a time when many works were destroyed during a period when members of the Manichaean faith were persecuted. After their acquisition by the Library in 2012 they were carefully conserved between glass sheets by our own Conservation Department.

Their history in the twentieth century

In a further twist to the story, it has been discovered that these fragments have earlier connections with Cambridge and it may not be their first visit here. They are mentioned in F.C. Burkitt’s Religion of the Manichees (Cambridge, 1925), pp. 111-19, where they are referred to as ‘Mr Crum’s scraps’. They had been formerly owned by the Coptic scholar W.E. Crum (1865–1944) who worked on the British Museum collections. Burkitt (1864–1935) was Professor of Divinity at Cambridge, a notable theological scholar, who had accompanied the sisters Agnes and Margaret Smith on the 1893 expedition to St Catherine’s Monastery in Sinai to examine the Gospel text discovered there.

At some point during the 1930s Crum gave the fragments to the Cambridge scholar Charles Allberry, after which they disappeared from sight until their recent rediscovery. Allberry (1911–43) was an English Egyptologist and Coptic scholar, a student at Christ’s College, where he became a Fellow in 1935. He translated Manichaean manuscripts including the translation and edition of A Manichean Psalm-Book, Part II, published in 1938. He also compiled a Coptic dictionary, unfinished at his death and was the editor (from 1939) of the Journal of Egyptian Archaeology. Some of his papers and notes, and the cards which were the working raw material for his dictionary, are preserved in the archives of the University Library. 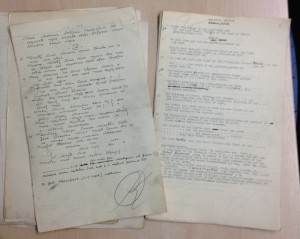 During the Second World War Allberry served at Bletchley Park; with his language knowledge he was invaluable as part of their code-breaking efforts. Later he joined the Royal Air Force but he was shot down and killed over Nederweert, Holland, on 3rd April 1943. During his time at Christ’s he became a friend of the novelist C.P. Snow and was said to be the model for the character of Roy Calvert in Snow’s novel The light and the dark.

Allberry’s sudden and untimely death brought to an end a most promising career but also resulted in the loss of the Manichaean fragments for several decades. A couple of years ago, these fragments were tracked down by Professor Nils Arne Pedersen (University of Aarhus) and Dr Erica Hunter (SOAS) in the possession of Mr David Allberry (Charles’s son), from whom they have been purchased for the Library’s collections. David Allberry never knew his father, having been born after his death, but has always been aware of his father’s academic interests.

What is the significance of the fragments?

It is difficult to be precise about the subject matter of the Allberry fragments as they are so small and detailed, but almost certainly it relates to astronomy or astrology, in which the Manichaeans had a keen interest. The text contains the words for ‘eclipse’ and ‘circle’. Other words on the fragments could refer to stars and constellations.

The value of the fragments can be understood not only in the texts themselves, but also in the wider context of other discoveries. The original language of the first Manichaeans was known about through Syriac and these fragments are of great value in reconstructing the original language and terminology of Manichaeism. This fact explains why these tiny fragments are of such significant scholarly value, even though their subject matter cannot be identified in detail. Moreover, we cannot exclude the possibility that the context of the ‘Allberry Fragments’ will be discovered in the future as further connections between the texts of other known manuscripts are made.

The Library is celebrating the rediscovery of these manuscript fragments by inviting Professor Pedersen to talk on their significance. As this year also marks the 70th anniversary of Charles Allberry’s death it is therefore a fitting time to pay tribute to the significant contribution he made to Manichaean studies.

The lecture also forms part of the 8th International Conference of the International Association of Manichaean Studies, 9th–13th September.