The death of a prince: four hundred years on 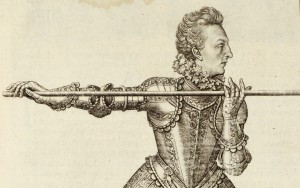 Poly Olbion or, A chorographicall description of all the tracts, rivers, mountaines, forests, and other parts … of Great Britaine (London, 1612), Keynes.H.4.17, p. [5].

A national outpouring of grief over the death of a member of the royal family has often in recent times been portrayed and criticised in the media as a particularly modern phenomenon.  The death of  a royal prince or princess has however, long been an occasion for a national expression of grief, although the form of that expression has changed over time. On 6 November 1612 Henry Frederick, the eldest son of King James I/VI, Prince of Wales and heir to the throne died after some weeks’ illness.  His death, aged only eighteen years, shocked the nation and inspired mourning in poetry, prose and music.

A new online exhibition displays some of the mourning works published in the aftermath of the prince’s death, copies of which are now held within the University Library’s collections.

Prince Henry had been a popular and active prince, gathering around him a court of scholars and writers and enjoying an active life of hunting and sport.  He numbered among his supporters poets such as as George Chapman and Michael Drayton, Francis Bacon the politician and philosopher, and the explorer Sir Walter Raleigh.  Those who wrote tributes upon his death included John Donne, the young poet George Herbert, and the future bishop of Durham, John Cosin.

One of the star items in the exhibition is Josuah Sylvester’s  Lachrymae lachrymarum, or, the spirit of teares distilled for the vn-tymely death of the incomparable Prince, Panaretus (Keynes.B.5.6), from which the skeleton shown here on the right is taken. Sylvester’s funeral elegy– the first poem in the compilation–is printed within a border of macabre skeletons, very much in the memento moritradition of the middle ages.  The poem is printed only on the recto of each page; the verso is printed entirely in black, save for the arms of the prince left unprinted.

This full-page inking–which leaves a slightly sticky residue on the paper even today–is also seen on the verso of the title page of George Chapmans Epicede, or funerall song…, although in this instance the lines of the heraldic badge have been left in relief on the woodblock, with the surrounding background cut away: a much more common printing technique.

Although Elton John wasn’t around in 1612 to write and perform a commemorative song, John Ward, composer and musician to Sir Henry Fanshawe, did mourn with music.  His madrigal for six voices, ‘Weepe forth your teares and doe lament’ is the last in his 1613 collection of English madrigals to 3. 4. 5. and 6. parts: apt both for viols and voyces. The text of the mourning song–presumably penned by Ward himself–reads as follows. I leave it up to the reader to decide how far national mourning has progressed in four hundred years. 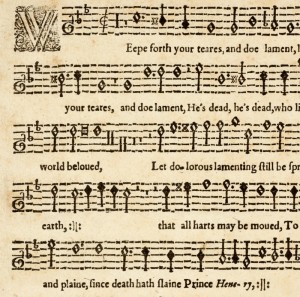 Weepe forth your teares and doe lament,

He’s dead who living was of all the world beloved,

Through all the earth, that all harts may be moved

To sigh and plaine, since death hath slaine Prince Henry.

Oh had he liv’d our hopes had still encreased,

But he is dead and all our joyes decreased.