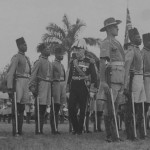 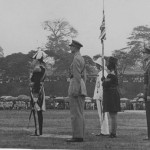 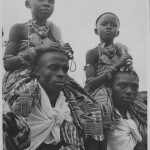 Y30448Q-23 Two Africans with children on their shoulders. 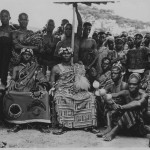 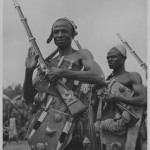 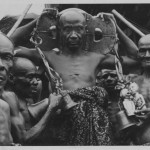 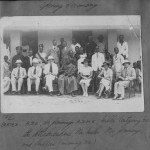 Owain Richards reflects on a collection of photographs from Ghana, which form part of the Royal Commonwealth Society’s collections, acquired by the University Library in 1993. He has been working on the collection as a volunteer since February 2012.

Owain was introduced to the Royal Commonwealth Society’s collections through his participation in a workshop on using photographs as a primary source material, organised for first year historians at Gonville and Caius College by Dr Sujit Sivasundaram, University Lecturer in World and Imperial History since 1500, and Director of Studies for History.

Owain worked on the photograph collection of Peter Holmes Canham (1914-1984). Canham was appointed a Cadet in the Gold Coast Administration in 1938 and served as A.D.C. Mampong, 1938-39, Acting D.C. Kumasi, 1940-42 and D.C. Bekwai, 1942-45, all in Ashanti. He returned to London as Senior Assistant Colonial Secretary in the African Department of the Colonial Office until 1950. From 1950 to 1957 his career continued in the Gold Coast, becoming Secretary to Sir Charles Arden-Clarke, the last Governor of the Gold Coast, 1955-57.

Owain writes: “Peter Canham’s Gold Coast collection is an enthralling and provoking mix of personal, pseudo-official and official photographs and postcards, an intriguing insight into the daily workings of the colonial administration and the personal lives of its staff. The collection captures the different levels of political and cultural engagement between colonial civil servants, local authorities and the local people themselves, particularly the Ashanti.

Y30448Q/14 and 15 are typical of official colonial photography, the spectacle and display of government events and ceremony perfectly captured in these images of celebrations and the governor Sir Alan Burns. Y30448Q/23 and 29 are, however, more characteristic of the collection and show Canham’s personal interest in the local peoples and the rituals of the Ashanti, notably the status of the king (the Asantahene) and the Golden Stool (sika’dwa), the physical manifestation of the spirit of the Ashanti nation. The images of the stool in the collection emphasise its prominence in Ashanti ritual, Y30448Q/24 and Y30448Q/09 showing the use of the throne in processions and its parity with the King in terms of authority.

Several of the images in the collection are particularly thought-provoking; images Y30448O/129-132 show the opening of a local dispensary, with the official seating plan placing the local chief (Attabubuhene) in the centre front row. Was this a necessity, a formality which needed to be recognised, or does the image possibly show a local administration in which the local chiefs retained significant prominence? Several images also show significant levels of cultural exchange, the Empire Day celebrations of 1939 an important public display with the involvement of the local people; attendees included the school band, scouts and among the events were bicycle and potato races. Was there thus a stronger rapport between administrators and the local populace in the confined environment of rural Gold Coast than is usually credited?

The Gold Coast collection of Peter Canham is an intriguing and diverse assortment of images which range from the personal to the official, from regimented display to momentary glimpses, and portrays colonial life seen from within.”

A catalogue is available online at: http://janus.lib.cam.ac.uk/db/node.xsp?id=EAD%2FGBR%2F0115%2FY30448O-R
and the original photographs may be viewed in the Library’s Manuscripts Reading Room