Posted on 30 November 2012 by Special Collections 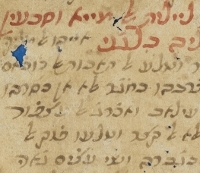 T-S Ar.36.68, fragments of Alf laylah wa-laylah (The thousand and one nights in Judaeo-Arabic)

Fragments from the Taylor-Schechter Genizah Collection were on the move last week, heading to an exhibition on The thousand and one nights at the Institut du Monde Arabe in Paris. The fragments on loan (T-S Ar.36.68) were probably written in Egypt in the 17th or 18th century and include the earliest known reference to the Arabic title of The thousand and one nights—Alf laylah wa-laylah. They cover Nights 168–170 and are written in Judaeo-Arabic (Arabic in Hebrew characters) in a neat eastern hand, intended for a Jewish readership. The paper bears traces of a watermark, but it is now unidentifiable.

This is one of many manuscripts in the Cairo Genizah that attest to a Jewish interest in reading gentile literature (another fine example is the beautifully illuminated leaf of Kalīla wa-Dimna, T-S Ar.51.60) and it demonstrates the cosmopolitan nature of the Egyptian Jewish community in the early modern period.

The exhibition runs from  27 November 2012 to 28 April 2013 and further information can be found on the website Les mille et une nuits.