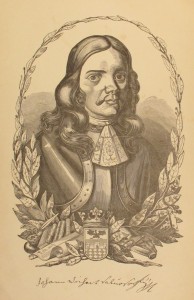 The North Front corridor cases are currently displaying 16 volumes from a truly remarkable set of facsimiles, given to the Library in 2011 by Darko and Petra Horvat. The Iconotheca Valvasoriana  is a modern facsimile of an immense collection of art works collected by Johann Weichard Valvasor across 14 years of travels throughout western Europe and the Habsburg Empire in the seventeenth century.

Johann Weichard Freiherr von Valvasor (1641-1693) was a nobleman from Carniola, an area in the Holy Roman Empire which roughly corresponds to modern Slovenia.  A prodigious scholar and publisher, Valvasor set up a printing workshop in the grounds of his castle, where engravers and printers produced many of his own works, including his most famous, the four-volume Die Ehre des Hertzogthums Crain (‘The glory of the Duchy of Carniola’) in 1689.

Valvasor was also a great collector.  As a young man, he travelled for many years around Western and Southern Europe, and during his travels he collected thousands of prints and drawings.  He put this collection together in 18 vast volumes.  Bankrupted by the production costs of his 1689 magnum opus, Valvasor was forced to sell his home and library.  The latter, with his print collection, was bought by the Bishop of Zagreb.  Bar the loss of volume 4 at some point probably in the 18th century, the set has remained intact ever since.

From 2000, the Slovenian Academy of Arts and Sciences worked in conjunction with the Metropolitan Library of Zagreb to produce the extraordinary facsimile on display in this exhibition.  The extant 17 volumes have been painstakingly reproduced, with critical parallel commentaries in Slovene, Croatian, and English added alongside.  The result, the Iconotheca Valvasoriana set, is a priceless resource, providing readers with access to thousands of 16th- and 17th-century prints and drawings.

The facsimile was produced in a very limited run.  Through the kind generosity of Darko and Petra Horvat, the University Library is one of the very fortunate owners of a copy.  Each volume has been catalogued separately, to allow emphasis on each one’s particular specialities, but a search for ‘Iconotheca Valvasoriana’ on the catalogue will bring all their records up.  For more information about Valvasor and the Iconotheca, visit the website www.valvasor.org. This exhibition runs until 2 February 2013.