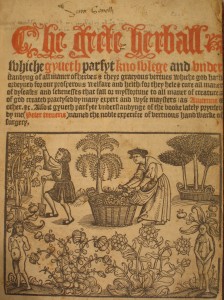 Herbals – collections of texts about the medicinal uses of plants and herbs – were compiled and used by many of the world’s great civilisations for over four thousand years.  The text lends itself to illustration and in the early years of printing in the fifteenth century, editions appeared with woodcuts.  A rare copy of an early English translation, entitled The grete herball, has recently been transferred to the University Library from the Department of Plant Sciences in Cambridge.

The Rare Books Department holds several large collections which have been transferred from other institutions.  The Plant Sciences transfer amounts to some 350 volumes, which arrived last summer and are now being catalogued onto Newton.  These volumes supplement an earlier transfer of around 1150 volumes from Plant Sciences in 2002 and many of the books have significant provenance.  These include a copy of John Ray’s Catalogus plantarum circa Cantabrigiam nascentium (London, 1660) owned by the poet Matthew Prior, and the extremely rare Horti Botanici Cantabrigiensis catalogus, a catalogue of the Botanic Garden printed in Cambridge in 1794 which was previously recorded by the English Short Title Catalogue (ESTC) in only one copy, at the British Library.  The grete herball is a highlight of the collection.  Printed in Southwark by Peter Treveris on 17 March 1529 (ESTC S124107) it is a book of great rarity; only three complete and perfect copies are known, in addition to several incomplete copies and fragments. 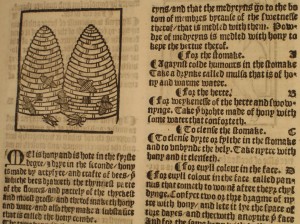 The entry for honey in The grete herball (Qiii recto)

The first herbals are believed to have been compiled in China in about 2700BC, and the Egyptian, Graeco-Roman and Arab peoples all produced them.  The earliest printed herbal, based on Pliny’s Historia naturalis, appeared in 1469 and the first printed herbal with illustrations in 1481.  The first illustrated English edition was printed by Treveris in 1526; the Plant Sciences copy from 1529 is the second edition, which is far rarer than the first.  Treveris’ Grete herball is essentially an English translation of the French Grant Herbier, first published in the 1480s.  Interestingly, the numerous woodcuts in this second edition – the 174 leaves contain 479 woodcut images – were also used for the first edition, but in their design are close copies of those used in a vernacular Dutch edition first printed in 1511.[1]  Furthermore, Treveris used the woodcuts in another of his books, The vertuose boke of distyllacyon of the waters of all maner of Herbes, first published in 1527.  Woodcuts were an expensive outlay for a printer and were often re-used over the years.  Many of the woodcuts in this edition are repeated several times throughout the book.

The Plant Sciences copy of The grete herball is complete in every respect, including the blank sixth leaf, which is usually missing.  The sprinkled calf binding, with simple blind-tooled decoration, is probably from the first half of the seventeenth century.  Although both boards survive, the spine has been replaced, probably in the late nineteenth or early twentieth century.  The book shows early signs of use, including many marginal annotations and additions to the contents list in both English and Latin hands of the sixteenth century. 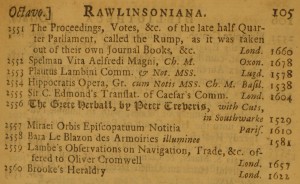 It has a distinguished and unbroken line of provenance back at least to the 1720s, being first recorded in the library of the celebrated collector Thomas Rawlinson (1681-1725), whom Dibdin called the “leviathan of book-collectors during nearly the first thirty years of the eighteenth century”.[2]  At the front of this volume is written his characteristic “C. & P.” mark (Collated & Perfect) and “2556”, the lot number entered for part nine of the sales after his death.[3]  Rawlinson’s library was vast; in 1930 De Ricci estimated it to have contained 200,000 volumes and called Rawlinson an “omnivorous bibliophile”.[4]  At one stage he was said to have slept in a passage in his house because of the lack of space in any of the rooms, and was forced to rent another house where he would “regale himself with the sight and scent of innumerable black-letter volumes [of which this must have been one]…stowed perhaps three deep from the bottom to the top.”[5]  At his death the collection was sold in seventeen sales over several years in the late 1720s and early 1730s. 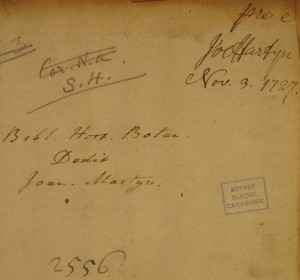 The next distinguished owner was John Martyn, Professor of Botany in the University from 1733 until 1762, who bought this volume directly from one of the Rawlinson sales (2nd November 1727 – the sixteenth day of part nine of the sales).  Very helpfully he inscribed his name and the date – Nov. 3 1727 – on the front endpaper, the day after the sale.  A correspondent of Hans Sloane and Carl Linnaeus, Martyn presented the University with many of his books upon resigning his Professorship in 1762.[6]  He was succeeded by his son Thomas, who held the Chair for 63 years.  These early herbals would have been used extensively by John Martyn in his work; between 1716 and 1730 was published (in parts) Martyn’s Compleat herbal (a translation of de Tournefort’s Elémens de botanique) and when his friend Patrick Blair died in 1728, Martyn saw his Pharmaco-botanologia through the press.[7]  A number of early herbals previously owned by Martyn came to the Library with the first transfer of Plant Sciences books ten years ago, so it is appropriate for this rare copy of Treveris’ Grete herball to be reunited with those volumes it stood alongside in the eighteenth century.

[3] Bibliotheca Rawlinsonianae…which will begin to be sold by auction…on Monday the 16th October 1727 (London: William Bowyer, 1727)