In search of the erhu 尋覓二胡: an exhibition by Colin Huehns

Posted on 19 April 2013 by Special Collections 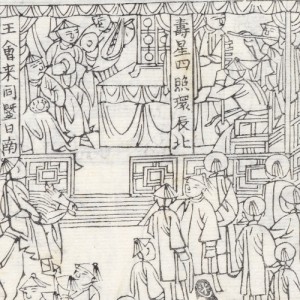 The erhu epitomises Chinese music; its modern version was developed by Liu Tianhua 劉天華 (1895-1932) and others in the early decades of the twentieth century together with a repertoire which has evolved since then. Iconographic sources, such as a wood-block illustration in an early Ming edition of Yue shu 樂書 (Book on music) by Chen Yang 陳暘 reliably dated to 1347, suggest however that bowed instruments of the distinctive erhu type where the bow-hair is inserted between the strings reached China about eight hundred years ago, and a 1876 edition of Yue shu depicting a generic variant of the 1347 image is shown here [Exhibit 1 below].

Prior to the twentieth century, we have very little information about the history of these instruments, perhaps because they were themselves unusual, or because they were associated with beggars, singsong girls, theatrical entertainers and the rural poor, and thus fell outside the mainstream cultural descriptions and depictions found in respectable scholarly writings. For this reason, a reconstructed history of the erhu, including its repertoire, social context, and role inside instrumental ensembles, can only be attempted from a smattering of surviving illustrations and occasional mentions in colloquial and encyclopaedic works, and this exhibition presents some of the most important examples of these. They were not easy to find, and represent the combined efforts of many hours of reading, browsing for pictures, and linguistic research to attempt to understand what is meant by the author. Parallel text Manchu and Chinese volumes [Exhibits 3 and 5 below], which illuminate problems of nomenclature from the unique perspective of a contemporary translator, are augmented by the illustration to the text one of them [Exhibit 4 below]. An important late eighteenth-century public performance context is shown in Exhibit 2 [below] and photographs of instruments from the post-1949 early period of Communist rule in Exhibit 6 [below]. These texts and images are set in context by a fine antique erhu from the Huehns Collection probably dating from the mid-nineteenth century. 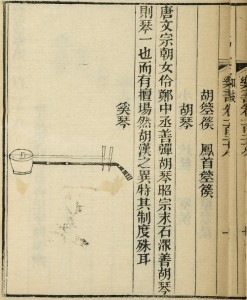 This page is in chapter 128, in a section entitled “Discussion of diagrams pertaining to music” 樂圖論, sub-section “On the Central Asian barbarians” 胡部. Although a bow is absent from the illustration, the spherical construction of the sound-box suggests an instrument similar to a modern banhu 板胡. A translation of the accompanying caption is: “Xiqin. The xiqin is originally of the music of the Central Asian barbarians; it evolved from the xiantao [a stringed drum] and is similar to it in shape; the Xi people like its music; regarding its construction: the two strings are rubbed by a bamboo strip in between them and sounded in this manner; it is used amongst the common people to this day; not perhaps a process of employing Chinese culture to civilize the Central Asian barbarians as is so often described!”

A description of the eightieth birthday celebrations for the Qianlong Emperor in 1790.

This ensemble of five musicians is one of many positioned along the route of the Emperor’s procession and the only one to include a member of the erhu family, this time a four-stringed sihu. Probably, their repertoire is derived from opera, though performed around a table; from right to left, they are playing a sihu四胡, a dizi笛子(flute), a yunluo 雲鑼 (bell-tree), a pipa 琵琶, and cymbals. 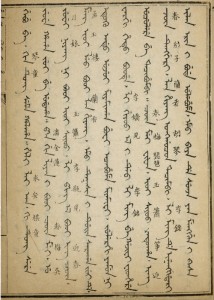 Printed editions of Jin Ping Mei first appeared in the declining years of the Ming dynasty (early seventeenth century). The page shown here (from Chapter 20) is the only mention of huqin胡琴 (Manchu onggocon) (a generic term often used for erhu-type instruments in early Chinese) in the entire novel: “Spring Plum [plays] the pipa; Jade Flute, the zheng箏 zither; Welcome Spring, the xianzi弦子; and Orchid Fragrance, the huqin.” Xianzi may also refer to an erhu-type instrument.

A set of two hundred colour illustrations to the Jin Ping Mei; most of the originals are now lost and preserved only through this collotype reprint. 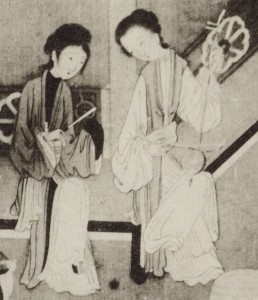 This illustration also refers to Chapter 20 and depicts Orchid Fragrance playing the huqin, an instrument painted here with a wooden front, pegs jutting sideways towards the player’s face, and spike protruding from the base of the sound-box, which is closest to the photograph of the tiqin提琴 (see exhibit 6a). 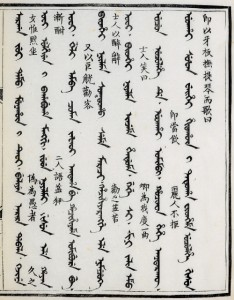 A Manchu translation (with Chinese parallel text) of selections from Liao zhai zhi yi, a famous collection of some five hundred tales of the supernatural. 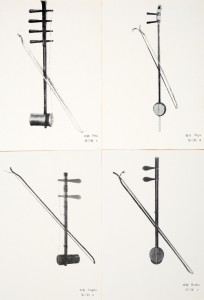 A delicate Chinese-style sihu, an instrument largely obsolete and to be distinguished from the chunkier modern Mongolian sihu.

The tiqin here is equipped with a wooden front as opposed to the snakeskin of the erhu and sihu, and is thus a banhu variant. Supplied with a long spike protruding out from the base of the instrument, tiqin of this sort are now obsolete in China other than occasional use in regional opera.

This jinghu sports a bow considerably longer than the instrument itself.

Fitted with a ban (板) or wooden front, this instrument has a small supporting stand to steady it on the player’s hip, which more recently has evolved into a larger swivelling block.

Composed in the 1920s, this piece relates the joyful occasion of the night before the Chinese New Year. It is played on the antique instrument displayed in the exhibition at Cambridge University Library, set up with silk strings and tuned to a lower pitch.