Historic rivals join forces to save 1,000 years of Jewish history

Posted on 8 February 2013 by Special Collections 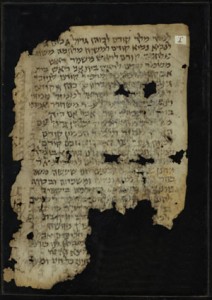 The campaign was officially launched this week at the British Academy in London.

The collection comprises more than 1,700 fragments of Hebrew and Arabic manuscripts, originating from the Cairo Genizah, dating from the 9th–19th century. They represent an invaluable record of a thousand years of the religious, social, economic and cultural life of the Mediterranean world.

The fragments were brought back from Cairo by the intrepid twin sisters Agnes Smith Lewis and Margaret Dunlop Gibson in 1896 and deposited at Westminster College. Treasures of the collection include the earliest known example of a Jewish engagement deed (dating from 1119), an eyewitness account of Crusader atrocities, and letters by leading Jewish traders of the 11th and 12th centuries.