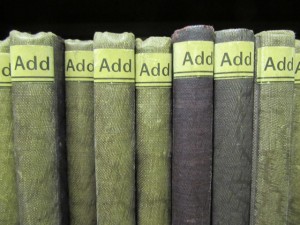 The Manuscripts Department has just reached a milestone with the arrival of its ten-thousandth Additional Manuscript, a collection of letters addressed to the poet and academic Michael Grant. It joins an immensely varied array of manuscript and archival material which has been 150 years in the making and includes some of the Library’s most remarkable treasures.

The practice of allotting newly-acquired manuscripts a number in the ‘Additional’ series began in the mid-nineteenth century. Between the years 1856 and 1867, the University published a five-volume catalogue of the Western manuscripts it had accumulated over the preceding centuries, the great majority of which had identifying references in the ‘two-letter’ class running from Dd.1.1 to Oo.7.60. Only in the last of these catalogue volumes did the Additional Manuscripts make an appearance, under a brief heading which noted that they ‘had hitherto no shelf-mark’.

The term ‘Additional Manuscript’ had been in use at the British Museum since the 1750s. The impetus for Cambridge to embark on this new sequence may have arisen from the concurrence of the work on the printed catalogue, which was intended to be definitive for the historic holdings of the Library’s manuscripts, and the arrival of a large new donation of documents from John Percy Baumgartner of Milton Hall. The ‘Baumgartner Papers’, comprising records gathered by the Revd Samuel Knight during the preparation of memoirs of the historian John Strype and Simon Patrick, Bishop of Ely, were given the references Add. 1 to Add. 88.

The printed catalogue finished in 1867 carried the Additional sequence as far as Add. 337. The hugely miscellaneous character of the series was established from the start: Additionals 89–337 included a seventeenth-century Pentateuch roll in a Chinese hand, autograph corrections by John Milton on a printed copy of his poem ‘Lycidas’, a volume of 1730s Law Reports in shorthand, notes on Linnaeus by the botanist Daniel Solander, and what the catalogue sparingly described as ‘A Russian letter, with seal, framed, and hanging in the Library’—subsequently identified as a passport granted by Tsar Alexei Michailovitch to John Lent, John Hebdon and Andrew Bush in 1652.

Once begun, the Additional series rapidly became the principal means by which the Library identified and organised its new manuscript materials. The sequence was also used to bring order to the existing holdings of ‘Adversaria’ (printed books with hand-written annotations) and Oriental manuscripts, and a large majority of the first 2,500 Add. numbers were given to these two groups. As library and archival practice developed, these decisions were revisited: around 1900, the Adversaria were removed from the Add. sequence and administered as Rare Books rather than manuscripts, and new accessions of Oriental manuscripts came to be given ‘Or.’ classmarks rather than Add. numbers. For new arrivals of Western manuscripts, however, the likelihood was that they would be given the next available number in the Additional sequence, and be known and referred to by this label from then on. The principal exceptions were large accumulations of papers of business corporations, land-owning families and prominent individuals, known as ‘Named Collections’; ‘Class Doc.’, which was mainly used for items such as title deeds and manorial court records; and deposits of public records.

As the Library’s collections grew, the Add. series became home to some of the University’s most precious and celebrated holdings. Highlights include the papers of Sir Isaac Newton (both the Portsmouth collection, Add. 3958–4007, and those in the Macclesfield collection, Add. 9597); the magnificent medieval illuminated manuscripts from the library of Samuel Sandars (Add. 4077–4123); and modern literary papers such as those of the war poet Siegfried Sassoon (Add. 9852 and others). Sets of personal correspondence, commonplace books, diaries, heraldic catalogues, genealogical pedigrees, antiquarians’ transcripts, autograph collections, photograph albums, scripts of scholarly works, and scientists’ experimental notebooks are all found here. The vast range of different types, ages and formats of material is matched by the seeming gap in cultural importance between the greatest and the least: as well as undoubted treasures of international importance, there are neglected but potentially fascinating oddments such as an inscribed doeskin bag from the 1450s (Add. 7307), a register of donors to the library of Coventry Grammar School in the early eighteenth century (Add. 4467), and a nineteenth-century scorebook of the Cambridge Archery Club (Add. 7117).

Generally speaking (for there have been numerous departures from strict chronology over the years) Additional numbers give a rough indication of the date when the material to which they refer was accessioned. On their own, they are less reliable as indicators of quantity, since the practice adopted in allotting numbers to new acquisitions has varied. When the working manuscripts of the first Lord Acton were acquired early in the twentieth century, each individual pocketbook and set of filing cards (Acton’s principal formats for note-taking) was given a separate Add. number, with the result that the Acton accession alone accounts for upwards of 750 numbers. By contrast, a century later, the tendency is to allot Additional numbers at collection level, with one main number controlling each set of documents sharing a similar provenance; the various items comprising the collection are then differentiated by a hierarchical structure of sub-numbers. One Add. number can accordingly denote several dozen boxes and many thousands of sheets of paper, as for example the archives of the novelists William Gerhardie (Add. 8292, 53 boxes) and Hammond Innes (Add. 9533, 44 boxes).

The Add. series continues to grow; even in the few days since the arrival of Add. 10000, it has risen to Add. 10006. Some new arrivals will be pounced on by eager scholars, while others may perhaps wait rather longer for a curious reader, but all have the capacity to advance in some degree the knowledge of human affairs and achievements of which such a depth and breadth is already embodied in the series.