Posted on 4 March 2013 by Special Collections 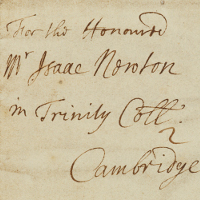 A further 8,000 Genizah fragments are being published in the latest release of Cambridge Digital Library, bringing the overall total to 12,000. The Cairo Genizah Collection at Cambridge University Library is the world’s largest and most important single collection of medieval Jewish manuscripts, and this selection includes three autograph texts by the greatest Jewish thinker of the Middle Ages, Moses Maimonides (T-S AS 111.164, T-S AS 149.89 and Mosseri VIII.24.1)

Three Newton manuscripts are also being released—including MS Add.4006, which contains Newton’s correspondence with John Flamsteed, the first Astronomer Royal. The correspondence touches on the dispute between Flamsteed and the Royal Society (of which Newton was the President) over the publication of Flamsteed’s observations. Newton required real observations of the Moon’s place for his theoretical work, and Flamsteed, who was the holder of those observations, resented Newton’s imperious demands. In 1712 publication went ahead without Flamsteed’s agreement, incensing the Astronomer Royal who referred to this as a ‘villainous outrage’.