The University Library holds many pieces of ephemera – notices, pamphlets and single sheets not intended to last or be preserved – which provide an important window onto episodes in our social history.  Having just lived through what was apparently the coldest March in the UK for fifty years, it seems appropriate to look at some printed ephemera held by the University Library relating to the freezing of the River Thames.

Some of the most fascinating and well-documented events connected with this phenomenon, in the seventeenth and eighteenth centuries, were the Frost Fairs held on the river.  The period between about 1550 and 1850 has been referred to as a “Little Ice Age”, during which extremely cold winters were quite common.  In addition, until it was embanked in the early-nineteenth century, the river was much wider and flowed more slowly, so was prone to freezing.

The stretch of the Thames between Westminster and the City froze more than a dozen times between 1600 and 1750, a spectacle which drew people from far and wide; during one such event, a commentator noted that people came “from all parts forty miles adjacent…”.[1]  In the winter of 1683/4, the most severe of all, the river froze to a depth of 18 inches, the historian William Maitland recording some years later that “…another city, as it were, was erected thereon”.[2]  From Temple on the north to Southwark on the south, a great street – Freezeland Street – was set up, flanked by booths housing puppet shows, coffee shops and taverns.  Carriages raced up and down the ice and on one occasion, an ox was roasted in the presence of King Charles II.  The diarist John Evelyn called it a “carnival on the water”.[3] 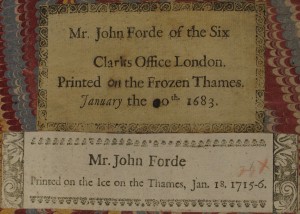 Some enterprising printers actually set up presses on the ice, and during the final Frost Fair, in 1814, one printed and published an entire book, entitled Frostiana: or a history of the River Thames, in a frozen state.[4]  Some of the most fascinating survivals are keepsakes of the event, which recorded the individual’s name, the date, often with one or more commemorative phrases or verses.  Evelyn is the primary source of our knowledge for this practice, first recorded in the winter of 1683/4: “The people and ladyes tooke a fancy to have their names printed, and the day and yeare set downe when printed on the Thames: this humour tooke so universally, that ‘twas estimated the printer gain’d £5 a day, for printing a line onely, at six-pence a name…”.[5]  If £5 was the turnover, the printer produced four hundred such keepsakes every day.

In the University Library I have found five examples, two of which are pasted into a book and three which survive as part of a collection of book-trade ephemera.  The first two examples (see above for photograph) were discovered by browsing the library’s collections[6] and are pasted to the inside front cover of a folio volume containing a Bible and Book of Common Prayer, printed in London in 1706.  Both keepsakes were printed for a Mr. John Forde, the first dated January 30th 1683 [i.e. 1684] and the second January 18th 1715/16.  The survival of two examples printed for the same individual more than thirty years apart is due to their use as book labels, being pasted into an important book – in this case the Bible – for posterity.  Indeed, an advertisement appeared during the 1715/16 frost, exhorting readers to “have their names printed, fit to paste into any book, to hand down the memory of the season to future ages”.[7]

John Forde’s name to the upper board 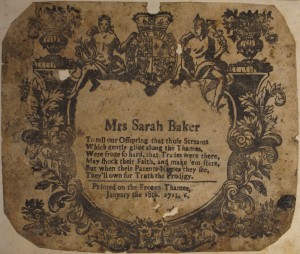 The volume in which these two items are found is part of the Bible Society library, deposited at Cambridge University Library since 1984/5.  This Bible belonged to the Biblical scholar Francis Fry, whose extensive collection was bought by the Society in 1890, and the binding is contemporary, both covers being stamped in gilt “IOHN FORDE 1707”.

The other three examples are preserved along with ephemeral items collected by A. N. L. Munby, Librarian of King’s College Cambridge from 1947 to 1974.  Munby was particularly interested in the history of collecting and the book trade, and the scrapbook into which these examples are pasted – one of 1800 volumes from Munby’s library now in the University Library – includes booksellers’ advertisements, subscription receipts and circulating library labels printed before 1800.  Incidentally, a conference will be held at King’s College Cambridge this summer, in honour of the centenary of Munby’s birth. 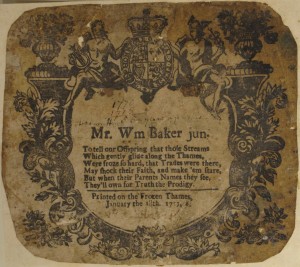 All three were presumably once pasted into the same book, as they relate to the same family.  The first two were printed on the same day as the later of John Forde’s two pieces – January 18th 1715/16 – although it is unlikely that both were produced by the same printer, given the difference in their design; Narcissus Luttrell, in his diary entry for February 4th 1684, noted that there were three or four printing houses on the ice when he visited.[8]  One of the two in this case bears the name “Mrs Sarah Baker”, the other “Mr. Wm Baker jun.”, one assumes her son.  The text is surrounded by an elaborate border of foliage and both names are followed by the same short verse:

To tell our Offspring that those Streams
Which gently glide along the Thames,
Were froze so hard, that Trades were there,
May shock their Faith, and make ‘em stare,
But when their Parents Names they see,
They’ll own for Truth the Prodigy. 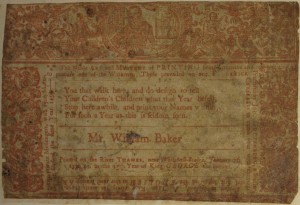 The third and final example, dated January 26th 1739/40, is perhaps the most interesting, having the most elaborate design and also carrying the name “Mr. William Baker”, who we must assume is the individual who appears as ‘junior’ on the example from 1715/16.  Around the outside is a long (and erroneous) piece of prose recording the history of printing, which states that Gutenberg invented printing at Harlem.  It goes on to perpetuate the belief that printing in England was first practised not at Westminster by Caxton in the 1470s, but at Oxford some years earlier, a theory which grew up around an Oxford book dated 1468, a misprint for 1478.  In the centre is a short commemorative verse, followed by the name and the date:

You that walk here, and do design to tell
Your Children’s Children what this Year befell,
Stop here awhile, and print your Names within,
For such a Year as this is seldom seen.
Mr. William Baker
Printed on the River Thames, near Whitehall-Stairs, January 26
1739/40. in the 13th year of King George the Second.

Other interesting commemoratives survive from the 1739/40 frost, including a silk handkerchief now at the Museum of London. But what are we to make of these curious survivals?  B. N. Lee, writing in relation to those preserved in the Franks Collection of bookplates, suggested that “the large size of the majority makes their use as book labels very improbable”.[9]  Although some are large (160 x 210mm is the largest I’ve come across), others can be as small as 52 x 101mm,[10] small enough to be pasted into a pocket-sized book.  The presence of these keepsakes in large Bibles, when considered with the existence of printers’ advertisements encouraging their use as book labels, goes against Lee’s theory.  There is also a comparison to be made with mementoes produced to commemorate visits to printing houses.  Numbers 386 and 387 in Lee’s catalogue were printed at Oxford’s Clarendon Press in the 1740s, and are in a very similar format to the ‘frozen Thames’ items.  Another example, produced to mark a visit to a printing house in 1706 (255 in Lee’s catalogue), was certainly intended for use as a book label as it includes the phrase “His Book” after the individual’s name.  Such similarities point to a wider culture of keepsakes and mementoes, certainly in the eighteenth century, than one might assume from the small number of survivals.  By comparing many of these rare pieces of ephemera, it might be possible – based on the tools, decoration and text used – to group by workshop those which do not carry a printer’s name.  By looking at their use as book labels and considering the sorts of books they were pasted into, it may be possible to understand more clearly their original use and significance. 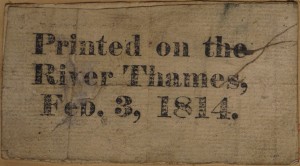 Having mentioned my blog entry to a colleague, another frost fair keepsake has come to light.  It’s from the final fair, held in 1814, which means we now have examples spanning 130 years.  It is by far the simplest, carrying no name or decoration (although it may have been cut down) and is pasted to a piece of card.  It reads “Printed on the River Thames, Feb. 3, 1814”, and the font in which it is printed is identical to that used for the title page of Frostiana, the book printed and published on the river during the 1814 frost fair by George Davis, who must be the printer of this keepsake.  Its journey to the University Library is also worth a mention; it is kept with a card, dated 30th November 1969, from the surgeon and book collector Sir Geoffrey Keynes to John Oates, who would eventually become Deputy Librarian.  Keynes writes “Here is a typographical ephemerid for the University Collection.  Or should I send it to Oxford?  I can’t imagine what you will do with it”.  It has now been added to our Newton catalogue, with the classmark 8000.d.1180(6) and is available for consultation.

[4] This book is immensely rare, with only 7 copies recorded in UK libraries.

[6] Since the Bible was one of the most frequently found books in homes of this period, I have manually searched every English Bible held in the Bible Society’s collection printed between 1640 and 1760, and found only one volume containing these keepsakes.

[9] B. N. Lee, Early printed book labels (1976), p. 86.  In his introduction (pp. xvii-xviii), Lee discusses the likelihood that some larger examples may just have been used as keepsakes, with some smaller examples being used as book labels.