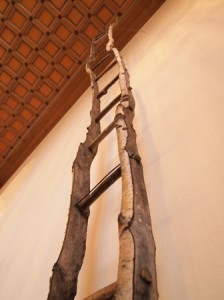 One of Ian Starsmore’s ladders in the Entrance Hall.

Recent visitors to the Library’s Entrance Hall cannot fail to have noticed the new art installation there, which extends up the stairways and on to the First Floor landing. ‘The Cambridge Ladders’ is the work of the artist and writer Ian Starsmore, who was for many years a Head of Department at the Norwich School of Art and has exhibited in England and abroad as a painter and printmaker, including at the New York and London Print Fairs. Ian has organised many exhibitions, and is currently Curator of Cley Contemporary Art 2013.

Ian writes: “I began to make images of ladders in 2010, in drawings, wood and silver. I was interested in shapes that matched each other in the way the side rails of ladders do, finding these in the broken branches in the woods around where I live, and was led to consider the contrasts in the use of them. I liked using material which is of no measurable value, together with a metal whose worth is unquestioned, bullish even on stock-markets. So, I became a bear playing with sticks and was happy. In the same year I worked briefly with No Fit State Circus, my coat pockets full of silver ladders and a two metre firewood ladder balanced on the palm of my hand. 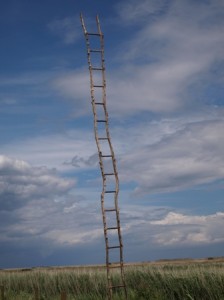 The ladder on the marshes at Cley-next-the Sea.

“All the ladders in this library exhibition were built by hand, cut along their length, from cleared or fallen branches or trees, working on them in the South Aisle of Wood Dalling Church. I made the 7.5 metre ladder from a Sliver Birch, and exhibited it on the marshes at Cley-next-the Sea, where it remained, upright and apparently unsupported for two months. In 2011 this ladder was transferred to Norwich Cathedral to hang over the nave and is the large ladder you see in this exhibition.

“At the same time as the event in the Cathedral, I buried in the earth, or hid, sometimes in plain sight, a dozen silver ladders across Norfolk. This was not a treasure hunt. I didn’t tell anyone. I found that I had lost two when I went to recover them, one to the sea, the second to the cutting of the ivy on a tower. The silver is tarnished, blackened, scratched, marked by the elements. The silver bowl, and the copper and silver house and towers, have gone through a similar process. I think I was imagining ladders and the moon. All these can be seen in the cabinet on display, here in the upper corridor and the stairways. 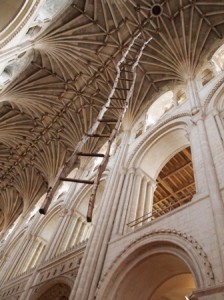 The ladder in Norwich Cathedral.

“Most of these objects have had ‘other lives’. One of the houses in the cabinet was suspended in 2010, high in the roof, in the aisle in Salthouse Church, above the point where I was told there is a mythical invisible door, la porte subtile. It was not important to me that this small silver house was seen by anyone, though some did. I liked the idea of its presence and absence, its own mythological quality. My photographs document some of these activities and include images of ladders in this exhibition as I had installed them previously in buildings or trees at different times of the year, in may-trees in summer or leaning into a beech in autumn; a kind of wandering calendar of appearances, in which the magical is disguised as the practical.

“The nine etchings are intended to be viewed as individual prints or as a portfolio, each image charting the wayward thinking that accompanied the making of the three dimensional work. The installations in the boxes are related to stories of artists, to moments of fear and change in their lives and to the ladder image in their work. The Olive Grove is an appeal to generosity and to the fundamental link between groves and ladders.

“The large Silver Birch ladder, together with constructions, prints, drawings and photographs, will have made a journey from a threatened and still wild environment near the sea, to the sacred place of the cathedral, to the place of scholarship in this library, from other towers to this tower. This transposition is important to me. After I began making, I discovered Robert Harrison’s book Forests in which he suggests that the opposite of the forest is the Academy, and that a resolution of this opposition would be beneficial. I have kept the wood I have used in as raw a state as I am able, and worked as simply as I could, crudely even, in both silver and timber, all this from a sense of urgency. 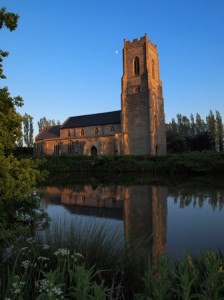 “In 2010 I realised that my ladder looked like the rough kind of thing the builders of the cathedral might have used as scaffolding, though mine would be unreliable to climb, and I have since enjoyed making other precarious and impossible ladders, both familiar and strange, their archetypes shifting. In the summer of 2012, after I knew my work would come to Cambridge, I discovered that the vicar of Wood Dalling in 1580 had been Thomas Lewgar, of Trinity Hall, and it is recorded that he taught students in my village.  The entrance to the study area of the church is close to where I have been working in the South Aisle and I made one of the ladders in this exhibition to fit the doorway and stairs there above South porch.

“As to the Why?, I did not think of it whilst making, but just to say that it pertains to the kind of longing which is the subject of William Blake’s etching , I Want. I Want. I like very much to think of word and image as close and related, rather than separate. Further reflection I will leave to the poets and writers who have offered to consider the subject within and for this exhibition; Elspeth Barker, Raffaella Barker, Imtiaz Dharker, Jane Griffiths, Michael Laskey, Peter Scupham and George Szirtes.”

The exhibition will be on display until December 2013. Further information for visitors is available from the staff at the Reader Services Desk, who can supply a list of items on display.