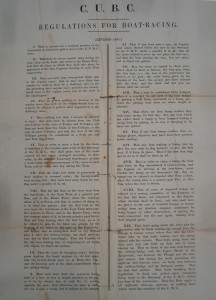 The CUBC regulations for racing, 1851

The University Library has just received a very timely donation from the Archives of St John’s College, to whom we are very grateful. It comprises a copy of the CUBC regulations for boat-racing, revised 1851; Rules and regulations of the Cambridge University Boat Club, 1900 and 1940 editions; and a nineteenth-century postcard featuring the well-known image of the first Boat Race crew training in 1829 next to what looks like Grassy Corner. The items will be conserved and catalogued in due course, but we felt that having received them on the first day of the  Mays, they should be shared with our readers as soon as possible.

The rules for the May boat races in 1851 were fairly simple: whereas today’s races include ten divisions and over 150 crews, and some 1500 students taking part, the Mays in the early years included only 24 boats and were considerably shorter, finishing for all crews at Morley’s Holt just after the Railway Bridge. Otherwise the rules were essentially the same; all crews line up one-and-a-half lengths apart, start simultaneously, and a bump is declared when any part of a boat is touched by the one chasing it, or the chaser overtakes.

By 1900 the races had become a bigger affair, though interestingly more crews were permitted in the Lents (43 in three divisions) than the Mays (30 in two divisions). The finishing post for the top crews was now the Big Horse Grind, where until the construction in 1935 of the Stourbridge Common footbridge a ferry was towed across the river on a chain pulled by a horse, enabling people to cross from the city side of the river to Chesterton village. It was decreed that those rowing in the Mays should use boats with sliding seats, whereas the Lents were still to be rowed on fixed seats (a rule that was not changed until 1920).  In the 1851 rules a bump was to be claimed by the coxswain raising a flag, but by 1900 this had changed to simply raising a hand as is the case now.

By 1940 the rules of racing had become once again more complex, with specific regulations regarding the size of bank parties. They contain the core of the current rules though, of course, there was no mention of female rowers; women did not compete in the Mays until 1974. The Library’s archives include records from the University Boat Club and the Rare Books Department has a small amount of ephemera in the Cam Papers collection; we would be delighted to hear from anyone with material to contribute to these collections, such as past Bumps programmes. Your author would like to take this opportunity to declare a personal interest, and to wish all crews rowing for the mighty JCBC the very best of luck!