Posted on 8 October 2013 by Special Collections 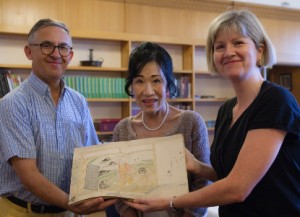 Treasures from the University Library’s Japanese Collections are to be digitised and made freely available to a global audience, thanks to a gift from Professor Mikiko Ishii.

Japan possesses an exceptionally rich heritage of manuscripts and printed works, and the University Library is fortunate enough to own some fine examples of this written and illustrated culture.

The treasures include four examples of the Hyakumantō darani (Buddhist invocations of the one million pagodas), commissioned by the Empress Shotoku (717–770) and amongst the oldest printed materials in the world. Each is enclosed inside a small wooden pagoda and was printed probably with wood-blocks between the years 764 and 770. Amongst the manuscripts is a handwritten story of a mouse (Nezumi no soshi), dating from the 18th century and illustrated with coloured paints. The images include a performance of two mice with two animal tamers, one of the latter wearing a costume of Nanbanjin (literally meaning ‘Southern barbarian’), the word referring to the early European visitors from Spain and Portugal. Originally made as a scroll, it was changed to a Senpuyo style of binding (a kind of folded bookbinding).

Professor Ishii, who for many years has been a regular visitor to the University Library from Kanagawa University, Japan, said ‘I have been visiting the University Library two or three times a year since the 1970s, making extensive use of the materials it holds and receiving great support from the librarians for my academic papers and books.  It is a great honour for me to be able to make a donation for digitising the Library’s Japanese  treasures. It is a humble gift to show my great gratitude to the Library and its librarians. I hope this will give the Library the opportunity to expand its digitisation programme so that many more people can access the materials of this world famous Library wherever they are’.

University Librarian Anne Jarvis said, ‘Professor Ishii’s generous donation will enable the Library to digitise its important early Japanese materials and to share them with anyone in the world through the Cambridge Digital Library’ (http://cudl.lib.cam.ac.uk/).

If you would like to see some of the treasures before they are digitised, an exhibition is currently on show in the Entrance Hall cases at the University Library, and runs until 23 October 2013. 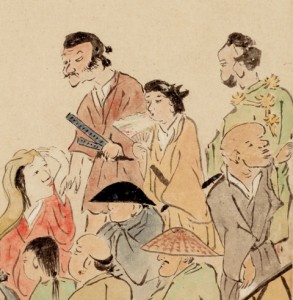 A detail from Nezumi no soshi, the story of a mouse

The display includes the two items mentioned above—one of the Library’s examples of the Hyakumantō darani, together with a wooden pagoda, and Nezumi no soshi, the handwritten story of a mouse, which was discovered by Professor Ishii when she was a lector at the Faculty of Oriental Studies in the 1970s. Also on show is Shaku makaen ron san gensho, another fine example of Japan’s early printed culture, which is a work of commentaries of Buddhism and was printed at Mount Koya in 1288.

Other objects on display give a select sample of our collection of later printed items. Oumajirushi is a compilation of Samurai banners of the 17th century, colourfully decorated in gold and silver, while Ansei kenmonshi is a 19th-century work reporting on the heavy damage caused by the Great Earthquake of the Ansei period. Nanshoku hiyoku no tori, an example of popular everyday stories (a genre known as ukiyozoshi) of the 18th century, deals with the subject of male homosexuality.

For more information on the Japanese Collections at Cambridge University Library, see http://www.lib.cam.ac.uk/deptserv/japanese/index.html.