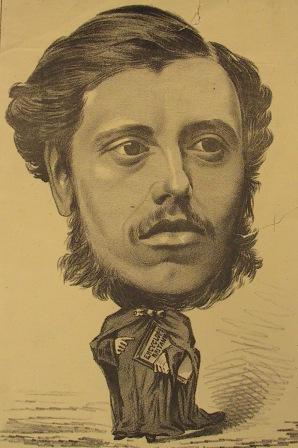 As part of our programme of regular additions to Janus, the website for Cambridge archives catalogues, we have recently added a catalogue of the letters and papers of William Robertson Smith which are held in the Manuscripts and University Archives department here at Cambridge University Library.

Robertson Smith was a theologian and Semitic scholar who produced important work on comparative religion and religious anthropology, heavily influencing both Emile Durkheim and Sigmund Freud.  He was born in Scotland in 1846 and initially studied mathematics.  He also published scientific papers in the Proceedings of the Royal Society of Edinburgh, of which he became a fellow, before studying theology and accepting the chair of Hebrew at the Aberdeen Free Church College in 1870.  His advanced theological views brought him into dispute with Church elders and he was dismissed after he was forced to defend himself in court on a charge of heresy for articles he had written on biblical subjects for the Encyclopaedia Britannica.  Robertson Smith subsequently became editor-in-chief of the Encyclopaedia Britannica, before taking up a professorship in Arabic at Cambridge University, where he also became University librarian.  During his career he published a number of important works on Semitic subjects, whilst his Burnett lectures, of which he gave three series, were also subsequently published.

The collection includes letters, lectures, notebooks, sermons and papers pertaining to Robertson Smith’s heresy trial.  It is in two parts, and there is a separate catalogue for each of the two references: MS Add. 7449 and MS Add. 7476.

The papers are available for consultation in the Manuscripts Reading Room.