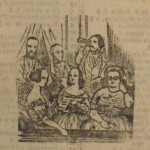 Theatregoers, from the cover of ‘Una cabeza de ministro!’ (1847)

The Library has recently acquired a remarkable collection of 1,852 comedias sueltas; these are short plays printed in Spain between the seventeenth and the nineteenth century, generally on poor-quality paper, and mostly unbound. A selection of these is currently on display in the Library Entrance Hall cases.

This new collection of sueltas makes an important addition to the recently digitized collection of over 2,500 pliegos sueltos, which can be viewed on the Cambridge Digital Library. It will be invaluable to scholars interested in drama production, the study of social history of theatre, the literary trends of the period, and modern Spanish popular culture more broadly. The collection is also important from a bibliographical perspective, as it provides scope for the study of publishing and printing in Spain in the eighteenth and the nineteenth centuries.

This exhibition complements our major exhibition Read all about it! Wrongdoing in Spain and England in the Long Nineteenth Century, which includes a selection of pliegos sueltos and Spanish broadsides discussing morality, crime, punishment and society. The Entrance Hall display can be viewed during Library opening hours, and runs until Saturday 16 November.